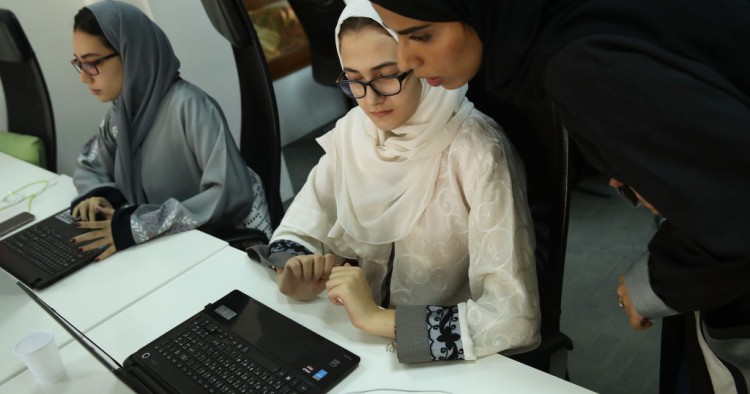 Female labor force participation levels in Arab countries are the lowest in the world — despite the rising educational attainment of women reaching working age. Indeed, young women across the Arab world exceed the education levels of young men, who are worrisomely falling behind. Remedying the underrepresentation of Arab women in the labor force and reviving the educational motivation of young men are both social and economic imperatives.

Historically, countries such as the United States, the United Kingdom, France, Norway, and Japan have realized the power of women entering the labor force and benefited greatly in terms of wealth creation and a sense of shared opportunities. These changes in the labor market have often come on the heels of big social movements — not unlike those in 2011 at the onset the Arab Spring and today in Sudan, Algeria, and Egypt. In all of them men and women demonstrated hand-in-hand for more social and economic freedom.

To realize the potential of Arab women, three dimensions should be acted upon.

First, countries must amend laws and regulations that have discriminated against female labor force participation and women’s basic economic rights. In recent decades, some countries in the Arab world have made strides in adopting legislation that went against the social tide and shook up centuries-old legal impediments to women’s rights. The 1956 Tunisia personal status code gave women rights equal to those of men in all areas of civil and public life. A number of other countries followed suit, including Saudi Arabia, which most recently allowed women to drive and travel more freely. Much remain to be done, including in changing inheritance laws which, as they stand today, put women’s access to capital and entrepreneurship in jeopardy. These changes are urgently needed, as these laws are often a pretext to discriminate against women, including in lagging areas. Changing laws though, does not necessarily immediately change behavior.

Even as laws and regulations change, women, including those who are highly educated, encounter very few opportunities in the formal sector because rising debt levels and anemic growth result in shrinking public employment. Public spending, historically the region’s engine of development, has reached its limit.

That means most employment opportunities for women are in the informal sector, which is perceived as unsafe and has very few social protections. The failure of public transportation in many countries in the region has become a key impediment to freedom of movement for women. Enforcement of safety standards and anti-harassment policies must become a national priority in Arab countries to protect women.

Second, countries must instill fair competition in markets. Although this does not directly target discrimination against women, it speaks to a fundamental flaw in Arab economies: their inability to generate good jobs and to integrate women in its labor force that is the result of almost impenetrable barriers to firms entering or leaving crucial markets — or, as economists put it, the lack of contestability. These economies have favored incumbent firms, whether private sector or state-owned. The lack of contestability leads to cronyism and what amounts to rent-seeking activities, which have little thirst for talent and investment, including research and development.

To create demand for increasing educated women, the wall of vested interests in Arab countries must be torn down. In practice, the tear-down could translate to the creation and reinforcement of regulatory watchdogs to champion competition. Arm’s length regulation that fosters competition and fights anti-competitive practices could prevent the perpetuation of oligarchies — the powerful few who often seize control of liberalization attempts, with the unfortunate result that the idea of reform is sullied among the citizens.

International financial institutions, donor countries, and other development partners can help Arab countries, not only by supporting changes in laws and regulations, but also by helping them move to modern, digitalized economies. In a coordinated fashion they should raise the issues of contestability and of associated credible and independent local bodies to promote competition as a necessary step toward building more inclusive societies. To ensure progress, the partners could condition assistance on pro-competitive steps and provide technical expertise in the institutional design of competent and independent national and regional regulatory bodies.

Third, countries must enhance technology to unleash the potential of young women and men. The digital economy can help develop platforms that not only provide new offerings on education, transportation, and access to finance — including for women — but also allow more flexible work from any location, including those regions that lack job opportunities.

But the digital economy is in its infancy and young people face obstacles in putting technology to productive use. To make the digital economy accessible to their youth, Arab countries must create a modern broadband internet that covers all regions, including those that are lagging economically. In those lagging areas, the India model could be followed, in which internet access is offered free for a while to enhance its beneficial economic and job-creating effects. These countries must develop an infrastructure and regulatory apparatus that supports money transfer digitally through mobile devices and the internet.

Arab countries are in the middle of massive social and economic transitions. Empowering women is at the heart of both these transitions. To succeed, Arab countries should make a whole-hearted effort in laws and regulations, competition, and technology.