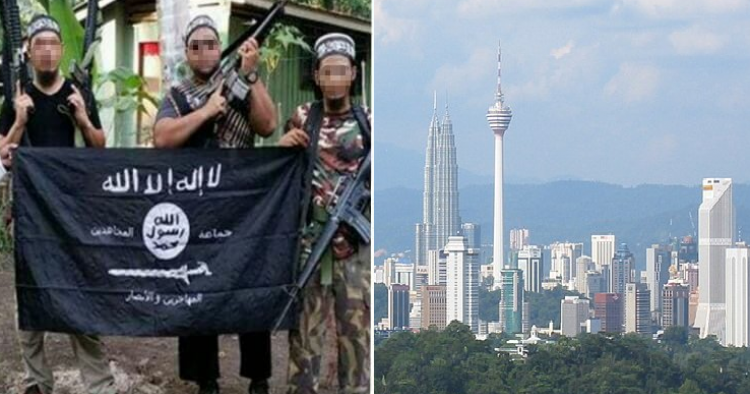 This article is part of a series that explores the threat posed by the Islamic State (IS) to Asia and efforts that the governments of the region have taken and could/should take to respond to it. Read More ...

Since the fall of Barguz in March 2019, the last stronghold of Islamic State (IS), the dream of a sharia-based Islamic Caliphate has faded.[1] Following the assaults on Raqqa and Aleppo and with IS on the verge of defeat, this small city had been turned into a kampung (or village) for Malaysian and Southeast Asian foreign terrorist fighters (FTFs) under the command of Katibah Nusantara leader Abu Naim.[2]

This article discusses the main factors that moved Malaysian jihadists to participate in the IS movement between 2013 to 2019, the grim circumstances in which they found themselves after having arrived in “paradise” and the status of the survivors who have returned home.

Malaysians were promised they could live in an Islamic Caliphate by freely applying Islamic principles in their daily lives. The administration of this Caliphate, they were told, would be based on a ‘syura’ system as implemented by Prophet Muhammad 1,400 years ago. The judiciary in an ISIS country would be based on ‘Sharia’ and would implement the hudud and qisas systems as stated in the Qur’an and Sunnah.[3] Muamalah (or daily life system) would be sharia-compliant, without secular or non-Islamic elements such as conventional banking and un-Islamic dividend-based business.[4] This hidden paradise and promised land, their Imam proclaimed, was located in Iraq and Syria; and only those who lived in it would be rewarded in the afterlife with a place in jannah (or paradise)[5] — the final abode of righteous believers.

At the peak of the ISIS led government in Iraq and Syria, more than a hundred Malaysian jihadists participated in the so-called “holy war” to establish a true Islamic Caliphate. Most of them were between the ages of 20 and 40 years old, such as Abu Wandy, Mohd Nizam, Akel Zainal, Abdul Khalid and Mohd Amirul. However, a few senior jihadists also participated, such as Rafi Udin and Ustaz Lotfi.[6] The Royal Malaysian Police (PDRM) recorded that at least 90 Malaysian jihadists were involved in the ISIS movement between 2013 till 2019. All of them had resided in Aleppo and Raqqa but later moved to Barghuz and elsewhere in Iraq and Syria.[7] The demise of ISIS left Malaysian jihadists uncertain about their future. Most of them were relocated to different regions within Iraq and Syria, and some of them were localized as Iraqis and Syrians.[8] A small number of Malaysian women were brought to the home countries of their husbands, such as Britain, France, and the United States.[9]

Most of the Malaysian jihadists were involved in a series of attacks in Iraq and Syria, including suicide bombings. A total of 24 among them were killed in those two countries including Hassan Zakaria, Abu Salim and Izzul Iman. At the age of 25, Hassan Zakaria drove a vehicle-borne improvised explosive device into a group of Kurdistan Workers’ Party soldiers and detonated the device in a suicide mission in the southwest town of Ain Issa on November 15, 2016.[11] A 38-second video of the suicide bombing attack that killed 14 Kurdish fighters and injured scores more went viral on an ISIS propaganda channel, Dabiq and Al-Syura. The leader of Katibah Nusantara Malaysia Chapter, Muhammad Wanndy, also known as Abu Hamzah Al-Fateh, was killed in Syria in a drone strike in April 29, 2017. Muhammad Wanndy was believed to be the mastermind of several attacks in the region including at an entertainment centre, Moovida nightclub, in Puchong, Selangor on September 13, 2016. Many more were killed in “jihad operations” either by airstrikes, drone attacks or clashes with SDF, SCM or US and coalition forces.[12]

Following the defeat of ISIS, 41 Malaysians applied to return to Malaysia.[13] As prospect returnees, all of them had to go through background checking to study the degree of their involvements in ISIS. The Malaysian government implements a very rigid approach on the evaluation of terrorists who had put in their applications to come home. After the vetting process was completed, 25 of them were allowed to return, most of them women and children related to the Malaysian fighters’ families.

The wives and children of deceased ‘jihadists’ applied to return home through various channels including the official Facebook account of PDRM. However, the government of Malaysia also assisted them with a special task unit based in Amman, Jordan for those who were in Iraq, and an office in Lebanon for those in Syria. All of the documentations related to the application for registration, passport, and airline ticket were also facilitated by those offices. However, at the same time, all of the region’s embassies, including the Ankara office, helped facilitate their escorted travel back to Malaysia.

Of the 25 who received approval to return home, 16 had arrived in Malaysia prior to the onset of the COVID-19 pandemic. Those who remain stranded in Iraq and Syria will be transported to Malaysia once the pandemic is over.[14] Of those who have already returned home, 12 were held under the Security Offences (Special Measures) Act 2012 (Sosma). Five were charged under section 124C of the Penal Code for engaging in activities detrimental to Parliamentary democracy. Four others were charged under Section 130J (1)(a) of the Penal Code, which carries a sentence of life imprisonment, or a jail term not exceeding 30 years, or with fine; and shall also be liable to the forfeiture of any property used or intended to be used in connection with the offence, upon conviction. However, three more were interrogated and detained under the Prevention of Terrorism Act 2012 (POTA); an Act to make provisions for the prevention of, and for dealing with, terrorist activities and for matters connected therewith[15].

As there is no law pertaining to the detainment of children, the four children of the returnees were handed over to the custody of their families. Responsibility for providing mental and psychological support for the children lies with various government agencies, including the Islamic Affairs Department (JAKIM), Prison Department (Penjara), and Interior Affairs Ministry (KDN).[16] The Community Welfare Department (JKM) was extensively involved in preparing the children for reintegration into the education system and society. The Malaysian government provided the children with monthly allowances and school supplies, including books and uniforms; and allowed for liberal visitation arrangements so as to facilitate children’s and parents’ readjustment.

Of the 90 Malaysian jihadist fighters who were detected in Iraq and Syria, 25 went missing in a series of jihad operations. The Government of Malaysia and PDRM have obtained little, if any information regarding their fate.

Malaysian FTFs realized that what they have been informed before going to Iraq and Syria was completely wrong. With all of the personal problems such as behavioural, identity, naivety, sins, vendettas and many more, they have been lured to join ISIS particularly by online propaganda. However, once they live in the ISIS government, they start to realize that the Islamic and caliphate life was merely a rhetoric. The lives in an ISIS led government in Raqqa, Aleppo or even in Barghuz were totally un-Islamic; full of denials, crimes and vices.

Malaysian foreign terrorist fighters (FTFs) opted to return home after realizing the Islamic State’s (IS) idea of “Islamic life” was not what it seemed. They were fooled by the “mirage” they saw on social media and “fake promises” by great influencers such as Abu Wandy, Akel Zainal, Ustaz Lotfi and Aisyah. The bad side of ISIS appeared when FTFs reached their destination, only to discover there was no way back.[18] Facing such a predicament, male FTFs fought to the death, seeking ‘jannah’. However, female FTFs’ lives turned upside down when their husband died. Although each family received $200 per month, these payments were discontinued upon the husband’s death or due to ISIS’ financial difficulties.[19] It was in the context of these desperate circumstances that survivors began to make contact with family members in Malaysia. Some even reached out to Malaysian authorities, though they knew they might end up in prison once having stepped onto home soil.

Malaysian FTF returnees, especially women, suffer from severe psychological problems[21] and require extensive counseling and other support. There are special programs including vocational training inside prison. Some have been allotted small sums to help fund business start-ups or business kiosks.

Malaysian foreign terrorist fighters (FTF) recruited by IS were fed an intoxicating brew of false promises. Of those few who managed to survive, some have already been granted permission to return home while a handful of others remain stranded. The fates of still others is unknown. The Malaysian authorities have crafted a scheme that combines the application of justice under the law in the form of prison sentences for engagement in terrorist activities with a multifaceted program to assist returnees in their reintegration into society. Providing such support for FTF returnees while closely monitoring them to ensure they are not again subject to extremist influencers or radical Islamic teachings is the sures way to provide them with a second chance in life[22] while helping ensure society’s safety and security.

[4]Any Rufaedah, Sarlito W. Sarwono, Idhamsyah Eka Putra, “Pemaknaan istri napi teror terhadap tindakan suami” [“The interpretation of the wife of the prisoner of terror against the actions of the husband”], Jurnal Psikologi Ulayat 4, 1 (2017): 11-28.

[10] The individappearing in this image is Muhammad Wanndy, also known as Abu Hamzah Al-Fateh or Abu Wanndy. He was believed to be the mastermind in recruiting Malaysians to be ISIS FTFs. Abu Wanndy also coordinated several attacks in the region inclusing Moovida Night Club attack in Puchong, Selangor in 2016. See “Top Malaysian ISIS Terrorist Mohammad Wanndy Mohamed Jedi Was Dead: Police Chief,” The Straits Times, May 8, 2017, https://www.straitstimes.com/asia/se-asia/top-malaysian-isis-terrorist-muhammad-wanndy-mohamed-jedi-is-dead-police-chief.

[17] The individuals in this photo include Malaysian police chief Mohamad Fuzi Harun (second from left) and Dato Ayob Khan, Anti-Terrorism Chief of Royal Malaysian Police (first from right), who are introducing “Aisyah,” the repatriated widow of an Islamic State fighter killed in Syria who arrived in Malaysia with her children ages 2 and 5. See Yusa and Azmi, “Malaysia: Widow of Islamic State Fighter Who Died In Syria Comes Home.”

[20] This photo depicts ‘Farah’, A 27-year-old woman, who was arrested for suspected links to the Islamic State in Iraq and Syria (ISIS), married one of its fighters over Skype. She got to know the North African fighter and eventually married him. He managed to persuade her to join him in Syria. See “Malaysia vs ISIS: A Timeline of Recent Arrests Linked to the Militant Group,” The Straits Times, January 19, 2016, https://www.straitstimes.com/asia/se-asia/malaysia-vs-isis-a-timeline-of-recent-arrests-linked-to-the-militant-group.