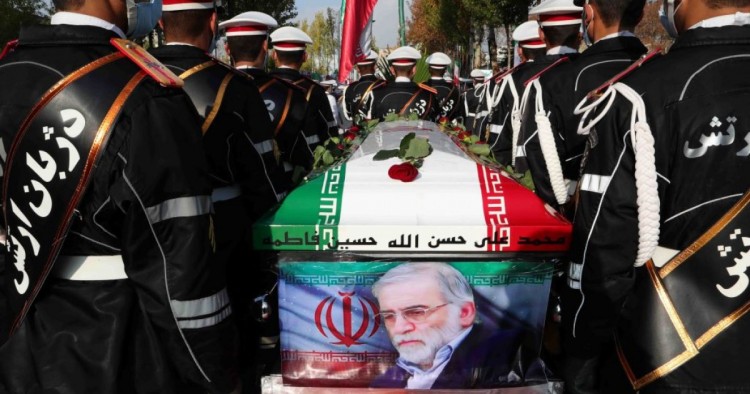 The assassination of Mohsen Fakhrizadeh, the most important figure in Iran's nuclear program, in late November 2020 is a major failure for Iran's intelligence services. Fakhrizadeh was a general in the Islamic Revolutionary Guard Corps (IRGC), the chief of the Organization of Defensive Innovation and Research (SPND) at the Iranian Ministry of Defense, and was known as the head of the military section of Iran's nuclear program.

Fakhrizadeh is no stranger to Iran’s political elite. In recent weeks, websites affiliated with the Iranian government have published images showing him secretly receiving a high-ranking award from Iranian President Hassan Rouhani in 2016. That year, after the signing of the nuclear deal between Iran and the group of world powers known as the P5+1 (the U.S., U.K., France, China, Russia, and Germany), 28 Iranian officials involved in the deal and Iran's nuclear program were awarded medals and high honors. It now turns out that Fakhrizadeh and at least three other people received their medals in a closed room for security reasons, so as not to be in front of the cameras of photographers and journalists.

In recent days, numerous tweets quoting Supreme Leader Ayatollah Ali Khamenei have been published stating that he asked Fakhrizadeh to take his personal protection seriously and observe strict security protocols. Despite all the secrecy and the emphasis on protecting Fakhrizadeh, however, he was still assassinated in the Absard area, about 70 km from Tehran, on Nov. 27. Why was he killed despite such a high level of protection, and what effect will his death have on the Iranian regime’s intelligence and security structures?

How did it happen?

Gen. Ali Shamkhani, a former senior IRGC commander and secretary of Iran's Supreme National Security Council, said security forces knew Fakhrizadeh was the target of an assassination attempt and had guessed the location. However, the enemy used new methods to assassinate him.

Ali Rabiei, a spokesman for Rouhani's government who served as deputy intelligence minister in the 1980s and deputy secretary of the Supreme National Security Council in the 1990s, had a different take. He said intelligence agencies had warned of Fakhrizadeh's assassination but that security protocols had not been followed. Rabiei did not name a specific entity as the culprit, but in Iranian news and political circles this statement has been interpreted as defending the Ministry of Intelligence and criticizing the IRGC and its affiliated intelligence and security services.

The protection of Fakhrizadeh and other key figures in Iran's nuclear program has been entrusted to a unit of the IRGC called Ansar al-Mahdi since 2012. In an interview with the IRGC’s Tasnim news agency, Brig. Gen. Ali Nasiri, the former commander of Ansar al-Mahdi, said that they were deployed for protection after the assassination of several Iranian nuclear scientists between 2010 and 2012.

The Ansar al-Mahdi Security Unit has a staff of 10,000-15,000 and is responsible for protecting the president and his deputies, the head of the judiciary and his deputies, the speaker of Parliament and his deputies, as well as ministers and others who need permanent or temporary bodyguards, according to the Supreme National Security Council. (The protection of Supreme Leader Khamenei, his children, and members of his office, however, is the responsibility of another unit of the IRGC called the Vali-e-Amr, which is estimated to have between 15,000 and 20,000 personnel.)

Although Rabiei has indirectly blamed the IRGC for Fakhrizadeh’s assassination, no individual or institution in the Islamic Republic has the power to directly criticize it due to its standing in Iranian society. The IRGC Intelligence Organization, which was established 11 years ago, is now the most influential intelligence service in Iran. Since its creation, a significant portion of the authority of the Ministry of Intelligence, which is under the control of the president, has been transferred to the IRGC Intelligence Organization, which is under the direct supervision of the supreme leader.

Hossein Taeb, the head of the IRGC Intelligence Organization, has a close personal relationship with Mojtaba Khamenei, the supreme leader’s son and a powerful behind-the-scenes figure who is a serious contender to succeed his father as the next leader of the Islamic Republic.

The IRGC is officially a member of an intelligence subdivision known as the Intelligence Coordination Council. This council establishes coordination between at least 16 intelligence agencies in Iran and is chaired by the intelligence minister. However, the IRGC's intelligence service does not heed the council and is more influential by itself.

A case involving the arrest of environmental activists makes it clear that the IRGC is now more powerful than the Ministry of Intelligence. In the winter of 2018, the IRGC Intelligence Organization arrested nine environmental activists on charges of espionage. While the Ministry of Intelligence has stated that it does not consider the detainees spies, the IRGC's intelligence service ignored the ministry. Tragically, Kavous Seyed Emami, one of the detainees, died in prison under suspicious circumstances, while the others were sentenced to between four and 10 years in prison. When reporters asked the minister of intelligence, Mahmoud Alavi, about reducing the ministry’s authority, he replied that if Ayatollah Khamenei wanted, he would be willing to hand over the rest of its authority to the IRGC.

Little may change, but the impact is clear

Although the IRGC and the Ansar al-Mahdi unit specifically are likely the main culprits behind the intelligence failures that resulted in Fakhrizadeh's assassination, it is unlikely that they will be held accountable. Supreme Leader Khamenei considers the IRGC to be one of the three main pillars of the regime’s survival, along with the judiciary and the Guardian Council. Each has its role and all three are needed: The IRGC suppresses domestic opposition and helps shape Iran's foreign policy against rivals like the U.S. and Israel; the judiciary arrests critics and dissidents and prosecutes and imprisons them; and the Guardian Council serves as the gatekeeper blocking critics and dissidents from entering key institutions like the presidency and Parliament by reviewing and disqualifying candidates for office.

After a while, there may be changes within the leadership of the IRGC, such as the commander of the Ansar al-Mahdi unit, but it is highly unlikely that they will ever be held accountable for Fakhrizadeh's assassination.

Nevertheless, the assassination is a clear sign that the Iranian regime’s rivals and enemies hold the upper hand when it comes to intelligence. The New York Times quoted three unnamed intelligence officials saying that assassination was an Israeli operation. While the Israeli government and Prime Minister Benjamin Netanyahu have refused to confirm or deny the allegations, in Iranian news and political circles, the assassination is seen as a tactical victory for Israel and a defeat for the regime and its intelligence services.

Analysts with Persian-language media outside Iran, such as Iran International TV, BBC Farsi TV, Manoto TV, and Radio Farda, are in agreement as well and strongly believe that the assassination has humiliated the regime.

Considering that the regime also lost another top military official, Gen. Qassem Soleimani, commander of the IRGC Quds Force, at the beginning of the year, Fakhrizadeh’s assassination only strengthens the claim that the regime has been unable to respond to the killings of important figures. However, this is not a new trend. 10 years ago, Gen. Hassan Tehrani Moghaddam, a senior IRGC commander and the head of Iran's missile program, was killed in a barracks explosion near Tehran.

The assassination of these three key officials is a great cause for concern within the regime and raises an important question. If top officials in Iran's missile, nuclear, and military programs can be killed in such a fashion, what guarantee is there that foreign intelligence services won’t also assassinate senior political leaders?

In the aftermath of Fakhrizadeh's assassination, the Ministry of Intelligence called on the people to cooperate with the regime in arresting the perpetrators, leading many analysts and citizens to believe that other assassination teams may still be active inside Iran and that the intelligence services are unable to apprehend them. Furthering concerns, Behrouz Kamalvandi, a spokesman for the Atomic Energy Organization of Iran, announced that the Fakhrizadeh assassination team was the same one that caused the sabotage and explosion at the Natanz nuclear facilities during the summer. Kamalvandi's remarks were seen as confirmation of the weakness of the intelligence services. After his speech, many were left wondering: If the perpetrators of the Natanz explosion and Fakhrizadeh's assassination were connected, why weren't they arrested in the six months between the two events?

Apart from the spread of distrust in the intelligence services after the assassination, the possible Israeli influence within the Iranian intelligence services is the most pressing concern — and one that is not limited to analysts and the public. Gen. Hossein Dehghan, former minister of defense and military adviser to the supreme leader, has spoken of the danger of infiltration. Gen. Mohsen Rezaei, the former commander of the IRGC, also called on President Rouhani to oblige Iran's intelligence services to identify the main sources and agents used by foreign intelligence services.

It has been reported that the person in charge of the Israeli desk in the IRGC intelligence service had been identified and arrested as an Israeli spy. While this may bring closure in the case of Fakhrizadeh’s killing, concern over the influence of the Islamic Republic’s most important enemy in its leading intelligence organization remains palpable. The assassination of Fakhrizadeh also raises a bigger question as well: just how wide and deep is the influence of foreign countries in Iran's intelligence services?

Reza (Morad) Vaisi is a journalist specializing in Iranian security and military history based in Washington, D.C. The views expressed in this piece are his own.