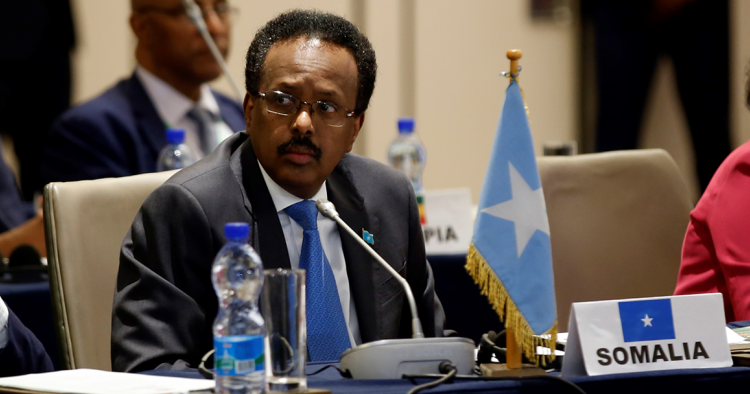 Mohamed Abdullahi Farmaajo, whose presidential term ended on Feb. 7, 2021, was elected in February 2017 with the hope that he would build on his predecessor’s successes in improving Somalia’s economy and security situation and deliver on his campaign promises of eliminating the terrorist group al-Shabab and ending corruption. Regrettably, he did the opposite and during his time in office corruption worsened, the economy faltered, and security deteriorated, allowing al-Shabab to regain the majority of the territory it lost before his election. Backed by Qatari money, the incumbent president has become increasingly dictatorial, waging wars against the country’s independent media, political opposition, and the federal member states. He replaced three south-central state leaders with his allies to control the federal state electoral board, while setting his eyes on the region of Gedo, which is part of the federal state of Jubaland, with the goal of delegitimizing its leader, Ahmed Madoobe, who he sees as threat to his reelection.

In December 2020, rather than utilizing the Somalia National Army (SNA) and security funding to fight against al-Shabab, Farmaajo instead chose to turn his fire on Kenya, accusing it of meddling in Somalia’s affairs and cutting off diplomatic ties. Skirmishes broke out along the border in an episode reminiscent of Somali dictator Siad Barre’s 1977 conflict with Ethiopia, as Farmaajo manufactured an international border crisis to cover up his attempt to plot a silent coup.

On Jan. 9, Farmaajo declared that unilateral elections would be held, excluding Puntland and Jubaland, in violation of the Sept. 17 electoral agreement. Somalia’s donors have urged that partial and parallel elections be avoided and requested the federal state members and the federal government to resolve the election impasse, paving the way for a Dhusamareeb IV election conference. This time around, however, rather than compromising, Farmaajo started demanding control of electoral selection in Gedo and Somaliland, which would give him an easy path to win reelection. Jubaland’s leader Madoobe accepted that Gedo was a special case and should have its own electoral committee, which was unprecedented and unconstitutional but a reasonable comprise from the state leader, with the condition that Farmaajo remove the SNA and clan militias from Gedo and drop his bid to control the selection of the electoral committee for Somaliland (which is a self-declared and de facto independent country like Taiwan).

Farmaajo rejected the compromise and left the conference, using the electoral impasse as an excuse to further delay the vote. In doing so, he hoped the Somalia Parliament would give him a default extension, enabling him to cling onto power beyond his term, which has not materialized. With Qatar’s support, he has found little reason to negotiate with other stakeholders or compromise. As a result, for the first time, Somalia has failed to reach an electoral agreement, leading to an ongoing constitutional crisis. In recent weeks, Qatar’s ambassador has held a number of meetings with clan elders and influencers in Mogadishu to pressure them to support the incumbent president.

On July 22, 2019, The New York Times published the contents of a conversation between Qatar’s ambassador to Somalia, Hassan bin Hamza Hashem, and a Qatari businessman discussing an attack carried out by the Somali terror group al-Shabab in Somalia’s Puntland region and suggesting that they had knowledge of it and may have at least tacitly condoned it. For Somalis who have long suspected that Qatar was supporting terrorism to advance its national security interests in the country, this did not come as a surprise.

Qatar has allegedly used al-Shabab to target groups it has identified as opposing its interests, including Somali politicians critical of Doha’s role in the country and outside actors like the United Arab Emirates. In the past, Qatar has also allegedly funded the government’s attempts to remove noncooperative leaders of Somalia’s federal member states.

Doha has invested considerable effort into meddling in Somalia’s internal politics and has bolstered its own candidates in Somali elections. In both the 2012 and 2017 elections, Qatari money allegedly played a decisive role in influencing the outcomes. In recent years, Qatar has taken a more prominent role in positioning itself as the main backer of the current Somali president.

To date Qatar’s activities in Somalia have not prompted much external condemnation. The U.S. and other Western governments have turned a blind eye to Doha’s destabilizing role, even going so far as to make it an integral part of the international community’s efforts to stabilize the country.

The current instability and political crisis in Somalia are the consequences of Farmaajo’s autocratic government and Qatar’s problematic role. Efforts to resolve the current crisis will end in failure unless partner nations such as the United States address Qatar’s backing for the current government and its alleged ties to al-Shabab. Pressure must be exerted on Qatar to end its involvement in perpetuating the conflict in Somalia.

To date, Somalia’s donors, mainly the EU and the U.S., have not held Farmaajo accountable for failing to hold elections and manufacturing an electoral and constitutional crisis. The lack of clarity in their recent statements creates ambiguity and a political vacuum at an extremely inopportune time, in the midst of a pandemic and humanitarian crisis. This signals to the average person in Somalia that an emboldened al-Shabab may be a better choice as an alternative government, which is the worst thing that could happen to Somalia and the Horn of Africa.

On Jan. 26 people in Mogadishu and across Somalia celebrated the 30th anniversary of the ousting of the ruthless dictator Siad Barre. It is ironic that three decades later it is the citizens of Mogadishu, who have spent billions of dollars of their own money to rebuild with only limited help from outside and lack any political representation, that have a greater commitment to the future success and prosperity of their country than a tribal elder like Farmaajo, who has instead chosen the interests of his clan and Qatar over those of Somalia.

Guled Ahmed is a Non-Resident Scholar with MEI, a renewable energy and water infrastructure expert, and an entrepreneur. The views expressed in this piece are his own.