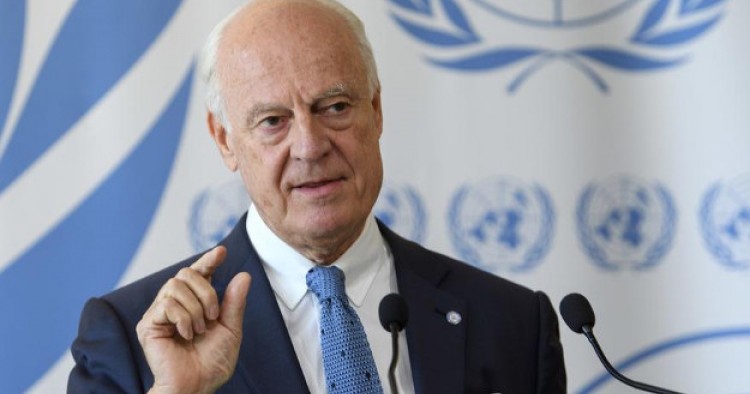 On Wednesday, U.N. Special Envoy Staffan de Mistura said the Syrian opposition must accept that it has not won the war against the regime of Bashar al-Assad. His comments, in the run-up to the next round of Syria talks in Kazakhstan, predictably drew positive reaction in Tehran and scorn by some rebel leaders. “The most significant part of the comments is not the proposal for peace talks, but the recognition that the ‘overthrow-Assad plan’ isn’t going to be won. That’s something the regime changers have been dancing around for some time, and likely something US terror proxy forces are going to get mad at Mistura for drawing attention to,” wrote Iran’s Fars News Agency, which is affiliated with the Islamic Revolution Guards Corps (I.R.G.C.). “On the other hand, by ending the CIA program to arm and train Qaeda-allied ‘moderates’ attempting to affect regime change in Damascus, the Trump administration has equally accepted defeat in Syria. This signals an end to America’s commitment to achieving regime change,” it continued. “This does touch on the fact that Washington still backs terrorist groups in Syria and elsewhere that pose an equal threat to the West states and is still continuing to back these groups quite heavily. Although it is common knowledge that the US is partnering with the Kurds, the Trump administration is actually attempting to give the Kurds as much Syrian territory as possible, conveniently taking Syria’s most oil-rich region in the process.”

Comment: Mistura made the remarks ahead of the next round of talks in Astana aimed at de-escalating violence in Syria and finding a political solution to end the six-year conflict. The next meeting is expected to focus on finalizing an agreement between Russia, Iran, Syria and turkey for a de-escalation zone in Syria’s Idlib Province. While previous rounds of negotiations have relatively reduced violence in Syria by establishing a mechanism to set up and enforce de-escalation zones, they have failed to find a political settlement to the war. Separate U.N.-sponsored talks in Geneva between the Assad regime and opposition groups have largely failed.