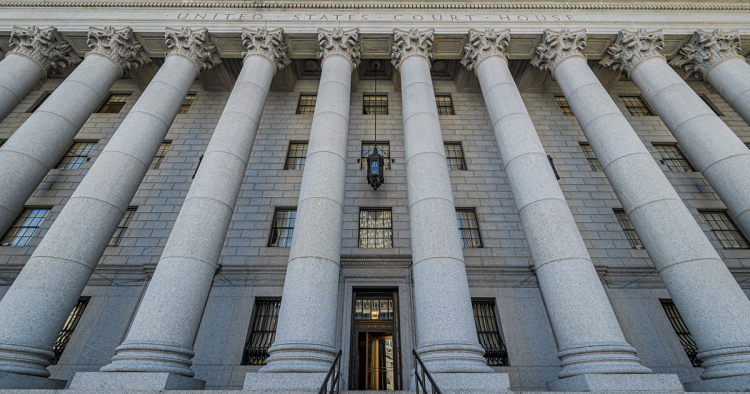 On Jan. 6, 2022, a U.S. district court judge dismissed a lawsuit against the Palestine Liberation Organization (PLO) and the Palestinian Authority (PA) brought by the family of Ari Fuld, a dual U.S.-Israel citizen murdered in 2018 by a Palestinian teenager outside of Bethlehem in the occupied West Bank.1 The lawsuit was filed under the Anti-Terrorism Act (ATA) [18 U.S.C. § 2331 et seq], alleging that by providing needs-based social welfare financial “payments to the families of deceased terrorists” or imprisoned terrorists, “who killed or injured Americans,”2 the PLO and the PA were liable for Mr. Fuld’s killing and for paying financial compensation to his family.

The judge found that while the family’s lawsuit was “morally compelling,” the court did not have personal jurisdiction over the PLO or the PA. Judge Jesse M. Furman’s decision is extremely significant for its legal integrity by applying binding due process constitutional precedent governing personal jurisdiction over a foreign defendant, like the PLO and the PA. Moreover, the ruling demonstrates the strictly political nature of the lawsuit, whereby powerful interests with deep pockets use litigation and lobbying to target the PA’s finances, including foreign aid, in order to hasten its collapse, as well as the limits of this type of “lawfare” against the PA.

A legislative and judicial summary of the litigation against the PLO

The Fuld case is not the first attempt at suing the PLO and the PA in U.S. courts. In 2011, in the case of Sokolow v. Palestine Liberation Organization,3 the U.S. district court found it had personal jurisdiction against the PLO and the PA under the ATA, which resulted in a $655 million jury verdict. On appeal, the Second Circuit vacated the judgment, concluding that the district court’s exercise of personal jurisdiction had violated the Due Process Clause of the U.S. Constitution.4

In response to these decisions, the plaintiffs and their attorneys actively lobbied Congress to change the law to codify U.S. personal jurisdiction over the PLO and the PA. That lobbying was successful. In 2018, Congress enacted the Anti-Terrorism Clarification Act (ATCA),8 according to which, “a defendant shall be deemed to have consented to personal jurisdiction . . . if the defendant accepts any form of [U.S. government] assistance”; or “maintains” or “procures” “any office, headquarters, premises in the United States [other than at the U.N.].”

Shortly after ATCA was enacted, the plaintiffs asked the Second Circuit to recall the mandate in Sokolow on the grounds that ATCA provided personal jurisdiction over the PA and the PLO. The Second Circuit and the D.C. Circuit denied their motions, finding that the plaintiffs had failed to show “that either factual predicate of Section 4 of the ACTA ha[d] been satisfied.”9 The plaintiffs petitioned the Supreme Court for review.

While the matter was pending, the plaintiffs and their lawyers continued to lobby Congress to amend the ATA again, aiming to carve out an exception to obtain personal jurisdiction over the PLO and the PA. On Dec. 20, 2019, Congress intervened yet again by passing the Promoting Security and Justice for Victims of Terrorism Act (PSJVTA).10

Congress custom tailored the PSJTVA to fit the underlying facts of all of the previously dismissed lawsuits against the PLO and the PA.11 It amended the definition of “defendant” to expressly include the PA and the PLO.12 And, it provided two new factual predicates for conduct that will be “deemed” consent to personal jurisdiction: (i) if the defendant makes any payment, directly or indirectly, to any payee (or payee’s family) involved in an action of terrorism against a national of the United States; or (ii) the defendant continues to “maintain” or “procures” any office in the United State, or “conducts any activity while physically present in the United States on behalf of the Palestine Liberation Organization or the Palestinian Authority.”13

Analyzing what constitutes “consent,” Judge Furman emphasized that “to satisfy the requirements of due process it ‘must be willful, thoughtful, and fair.' ‘Extorted actual consent’ and ‘equally unwilling implied consent’ are not the stuff of due process.”14 As such, “the PSJVTA does not,” concluded the court, “constitutionally provide for personal jurisdiction over Defendants in this case.”

Judge Furman was “blunt” in summing up the analysis:

“In the final analysis, the Court cannot acquiesce in Congress’s legislative sleight of hand and exercise jurisdiction over Defendants here pursuant to the PSVJTA. A defendant’s knowing and voluntary consent is a valid basis to subject it to the jurisdiction of a court, but Congress cannot simply declare anything it wants to be consent. To hold otherwise would let fiction get the better of fact and make a mockery of the Due Process Clause.”15

Notwithstanding the above, Judge Furman left the door open for further litigation, noting that lawsuits claiming that certain future conduct of the PLO or the PA may in fact satisfy the jurisdiction requirements of the PSVJTA. He also dismissed the Fuld case without prejudice, which means that the plaintiffs have the right to refile their lawsuit in the future, based on the argument that new facts have come to light.

On April 27, 2020, the Supreme Court granted certiorari and vacated the Second Circuit Sokolow decision, remanding the case for further consideration in light of the PSJVTA.16 The original U.S. district court judge who previously found personal jurisdiction over the PLO, Judge George B. Daniels, retired in May 2021. With the successive circuit court decisions finding no jurisdiction over the PA and the PLO, this conclusion is not likely to change in light of the PSVJTA. Judge Furman’s dismissal of the Fuld case is a strong validator of this prediction. Be that as it may, the final word is not in on whether the PSVJTA’s “deemed consent” provision is constitutional.

The legal basis behind the PLO’s successful record of lawsuit dismissals, anchored as it is on the Due Process Clause of the U.S. Constitution, is clear and legally compelling. Yet, members of Congress and lobbyists considered these decisions as mere loopholes that allowed the PLO and the PA to escape accountability for their alleged support for terrorists.17 If in the future plaintiffs succeed in legislatively setting aside decades of constitutional personal jurisdiction jurisprudence in order to exercise jurisdiction over the PLO and the PA, the plaintiffs will still have to succeed on the merits of their claims.

On the merits, plaintiffs have to prove proximate cause of the death. The district court in Shatsky, for example, held that “no reasonable jury could conclude that the PA proximately caused the bombing by paying [. . . ] a salary [to a Captain in the Palestinian security forces who recruited a suicide bomber].”18

Would a reasonable jury find that the PLO had proximately caused the stabbing of Fuld because it provides needs-based social welfare support to families of Palestinian martyrs or political prisoners? That’s hard to predict because juries are not known to strictly apply the law — the Sokolow jury verdict is a prime example.

It is undisputed that the amendments to the ATA were conceived, crafted, and passed into law in order to circumvent, and as Judge Furman insightfully said, “to make a mockery of,” the Due Process Clause — part of the bedrock of our Constitution. The Constitution so far has prevailed; for how long this will last, we shall see in the next chapter of the politically driven and well-financed litigation against the PLO and the PA.

Abed Awad is a founding partner of Awad & Khoury, LLP located in Hasbrouck Heights, New Jersey. The views expressed in this piece are his own.

11. For example, the court in Shatsky held that “martyr payments” did not confer specific jurisdiction over Defendants. In other words, the PSJTVA cannot declare that such conduct “shall be deemed” to be consent. 955 F.3d at 1022-23, 1037

13. The PSJVTA excluded certain activities and locations such any office used exclusively for the purpose of conducting official business of the United Nations.

17. Laura Kelly, Congress set to pass bill to help terrorism victims win compensation from Palestinian Authority, The Hill (December 17, 2019) (“Lawmakers in both the House and Senate have worked for over a year to craft the language, which is an amendment to the Anti-Terrorism Clarification Act (ATCA) . . . . meant to close loopholes that allowed the Palestinian Authority to avoid paying a $655 million verdict to American victims of Palestinian terrorist attacks.”).