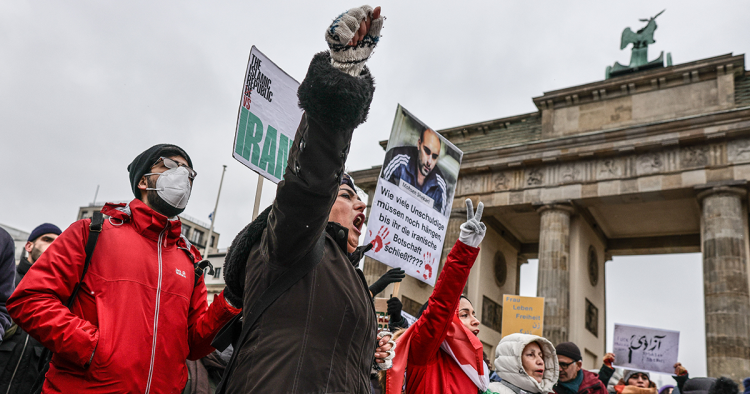 Unlike in Iran, media in the West are not supposed to take orders from the state, and the Iranian foreign ministry’s rage directed at the French government was obviously misplaced. Nonetheless, the Islamic Republic was quick to launch its first retaliatory measure, announcing the closure of a long-running institution for Iranian studies in Tehran affiliated with the embassy of France: the French Institute of Research in Iran (French acronym IFRI).

The Iranology center was founded in 1983, as a result of the merger of the French Archaeological Delegation in Iran (DAFI), established in 1897, and the French Institute of Iranology in Tehran (IFIT), launched in 1947 by the late philosopher Henry Corbin. The four-decades-old IFRI has long been a wellspring of academic research pertaining to Iranian history, archaeology, and culture, and its initiatives included facilitating scholarships for young Iranian researchers to study in France, issuing publications, as well as holding conferences and exhibitions.

The French center had been dormant for years until it resumed its activities in 2013, when the pro-reformist President Hassan Rouhani came to power and commenced a thaw in relations with Europe. Its shutdown this month will likely not seriously undermine the projection of French soft power but could further damage relations between Iran and the wider international community.

This is not the first time Iran’s cultural ties with the world — already limited since the 1979 revolution — have come under serious threat. Last October, the German Foreign Office announced a new package of punitive actions against Iran in response to the government’s violent crackdown on the nationwide protests. The sanctions included a reduced on-the-ground presence of German cultural institutions.

Another major example of rupture in cultural connections between Iran and the West was the suspension of British Council operations on Iranian soil in 2009, when the institution’s entire local staff of 16 was summoned by the office of then-President Mahmoud Ahmadinejad and instructed to resign. Pressure on the organization had been growing in the lead-up to the British Council’s withdrawal, including routine accusations of its supposed involvement in subversive plots. Ten years later, Iran’s Ministry of Intelligence declared that any cooperation with the British Council would be deemed a criminal offense.

No comprehensive list exists of foreign cultural and academic entities based in Iran. But after years of grinding sanctions, growing isolation, and the government’s strict protectionist policies, any such presence appears to be trivial. Rather than institutional relations, mostly left are small numbers of Iranian academics, artists, writers, and cultural practitioners who maintain personal ties with international counterparts.

While the Iranian authorities view the activities of international organizations with deep skepticism and even occasionally seek to curtail the diplomatic representation of other countries in Tehran by cutting back the number of approved diplomats in embassies, the global trend is toward further cultural exchange and greater collaboration. Paris, for instance, is home to 58 foreign cultural centers. In India, 14 international cultural institutions operate as of 2021.

At first blush, it might appear that the void being left as a result of major European countries withdrawing their cultural footprint from Iran or being forced to leave has created an opportunity that states maintaining close relations with Iran, such as China and Russia, will jump to seize. But no evidence exists that such a scenario is currently unfolding. China’s Confucius Institute has a branch at the University of Mazandaran in northern Iran, but it is not a particularly large or outsized one. Also, in 2019, Shanghai University and Tehran's Allameh Tabataba'i University inaugurated what was termed the first China Studies Center in Iran, which is more of a research center rather than an outfit to promote Chinese culture.

There are departments of Russian language and literature at various Iranian universities, some of which are funded by the Russian government. But they are not especially high profile, and their functioning is broadly limited to those academic institutions, without extending into the public sphere.

The general policy of the Islamic Republic is to constrain, as much as possible, its citizens’ exposure to foreign cultures and prevent their engagement with the outside world, which explains why cultural ties, even with neighboring or friendly countries, are so scant. For example, despite the government insisting on the idea of Islamic solidarity, and notwithstanding efforts to force itself into the geopolitical calculi of the Arab world, Iran doesn’t host any cultural centers run by Arab League governments. In 2015, Iraq opened a cultural center in Tehran amid considerable publicity, but it was closed down in less than a year due to internal administrative issues.

The reasons are manifold and the long-term implications grim. The Iranian government has traditionally thrived on isolationism and keeping its populace detached from the global community so as to maintain its grip on power. This blueprint helps the authorities stem the potential tide of protest and minimize popular demands for more freedoms or a better future that Iranians might have been exposed to if they retained open access to outside societies.

The phrases “cultural NATO” and “cultural invasion” have long been mainstays of the leadership’s political jargon. By those terms, the Iranian authorities mean any challenge to the rigid, ideological value system they have cobbled together over the years and tried hard to prop up through systematic indoctrination. One way such orthodoxies might be contested is via cultural diversity of the sort championed by the international institutes long resented by the Islamic Republic.

This self-inflicted isolation has alarming consequences for Iran’s intelligentsia, academics, and cultural practitioners. By contrast, in neighboring Qatar and the United Arab Emirates, dozens of American and European universities have sprung up over the years, and their governments are moving swiftly toward internationalization. Yet qualified Iranian students, university professors, artists, writers, journalists, curators, and others engaged in the cultural ecosystem all must struggle to find opportunities for mentorship, training, cooperation, capacity-building, and markets for their products.

As a result of this government-generated insularity, Iran’s young population has become cut off from global cultural developments and often deprived of the latest products and services that are readily available to their peers in the rest of the world. At the same time, these policies have exacerbated the nation’s brain drain. As long as this situation persists, more Iranians with the intellectual skills and capabilities to benefit their fellow citizens will pack up and depart in search of more inclusive, tolerant destinations.

Kourosh Ziabari is an award-winning journalist from Iran, an Asia Times correspondent, and a former Chevening Scholarship recipient.