The Gambia Charges Genocide at the World Court: Pursuing and Achieving Justice for the Rohingya 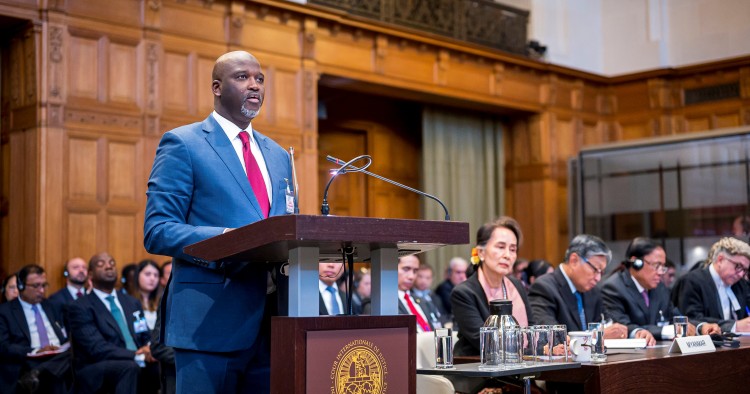 In December 2019, as Rohingya refugees gather in the camps of Bangladesh chanting “Gambia, Gambia,” the brilliant and indefatigable Abubakr Tambadou, Minister of Justice of The Gambia, the smallest country in mainland Africa, acting on behalf of the 57-member Organization of Islamic Cooperation (OIC), took on Myanmar’s State Counsellor and Nobel Peace Prize laureate, Aung San Suu Kyi, at the World Court for her country’s blatant violations of its obligations under the 1948 Genocide Convention.[1]

Minister Tambadou broke new ground, acting solely out of international public interest to uphold a pillar of the post-Second World War rules-based international order. The impetus for his brave and inspiring action[2] lies in the events subsequent to August 25, 2017, when decades of unfathomable persecution of the predominantly Muslim Rohingya ethnic minority in northwest Myanmar took a brutal turn. The State of Myanmar and its agents, under the pretext of strengthening security and defusing tensions, systematically attacked and razed hundreds of Rohingya villages, raped women and girls and massacred thousands and thousands of Rohingya men, women and children.

In just a few weeks, the campaign resulted in 10,000 deaths. More than 700,000 Rohingya Muslims fled from Myanmar into Bangladesh, joining 300,000 Rohingya who were forced out during previous waves of State-sponsored violence most recently in 2016. This is one of the largest and fastest-growing refugee crises since the Rwanda genocide. Over a million Rohingya Muslims, half of whom are women and children, have been displaced from Myanmar. The perpetrators’ declared intent — so-called “clearance operations” — was to expel them permanently from their homeland. Even though the UN, U.S., Canada, France, Bangladesh, Malaysia, The Gambia and the 57 member Organization for the Islamic Conference (OIC) have spoken out on genocide against the Rohingya, those responsible have gone largely unpunished. Myanmar has denied the facts and been undeterred in its conduct.

Given the exceptional gravity and ongoing risks of irreparable harm, The Gambia sought Provisional Measures from the International Court of Justice (ICJ), the UN body that adjudicates disputes between sovereign states.[3] Among the provisional measures requested by The Gambia in its 46-page filing last November are that:

Widely known for working at a leisurely pace, the Court swiftly ordered immediate injunctive measures. Although the ICJ did not instruct Myanmar to admit UN investigators to the country, the 17-member Court nonetheless, in a momentous and unanimous decision, issued orders that are binding on Myanmar and create legal obligations that must be enforced. The emergency provisions direct Myanmar to:

The measures are binding and not subject to appeal, but the Court possesses no direct means of enforcing them.  However, the Court’s orders automatically seize the UN Security Council for purposes of supervising compliance. On February 3, the Council — which failed so far to refer Myanmar to the International Criminal Court (ICC) due to the threat of the double Chinese-Russia veto — discussed the Court’s orders, but failed to agree on a statement.[6]

No matter the challenges within the Security Council, and while individual accountability of those personally responsible can and should be pursued elsewhere, including and specifically at the International Criminal Court (ICC),[7] the bold action by The Gambia before the ICJ has openly exposed Myanmar’s diversions and tiring denials of a painful truth to a public process of legal contestation, judicial scrutiny, and ultimately adjudication. The ICJ’s landmark unanimous ruling, apart from the likelihood of having a real impact in protecting the 600,000 Rohingya who remain in the country,[8] showed that Myanmar’s flippant rebuttals and facile defenses of “fake news” and “fake rape” could not and will not stand up.  Indeed, the ICJ’s public process offered a sort of truth-determining exercise which on its own will be valuable for the prospects of success of the case on the merits. A final judgment against Myanmar holds the prospect to prevent genocide from occurring in the future, and, ultimately, deliver reparations ranging from financial compensation for the victims to structural reforms aimed at granting the Rohingya their full rights, including restoring their citizenship, and ending their persecution once and for all.

More to the point, and as evidence in the many searing reports issued by the UN Fact Finding Mission on Myanmar,[9] a critical aspect of this case would be the adjudication of the state-sponsored, widespread and systematic sexual violence committed against Rohingya women and girls as a central component of the genocidal policy planned and waged by Myanmar at the highest echelon of government. This will make clear this prohibition in contemporary international relations and law, and will be a welcome affirmation of the international rule of law in a period when it is badly needed.  As such, a fulsome case needs to be made before the Court for which it would be welcome if other States would weigh-in as The Gambia called for in its statement at the UN General Assembly last September. Indeed, such a case is unlikely to present itself again anytime soon, so this opportunity should not be lost for the benefit of the Rohingya and for the rules-based order.

The seriousness of the case, its process and possible consequences will disrupt business as usual. Adjudication by the World Court has made it far more difficult for the unscrupulous defenders of Myanmar’s regime and for those appearing to empathize with and provide humanitarian support for the victims to continue investing in the spoils of genocide. Moved by the remarkable example of The Gambia, which is preparing to file the initial pleadings in the case,[10] the other 150 States parties to the Genocide Convention must now decide where they align and whether they want be on “the right side of history” in supporting The Gambia on the long road ahead of pursuing and achieving justice for the long-suffering Rohingya.

[7] International Criminal Court (ICC), “Bangladesh/Myanmar Situation in the People’s Republic of Bangladesh/Republic of the Union of Myanmar,” ICC-01/19, https://www.icc-cpi.int/bangladesh-myanmar.