Gaza on the verge 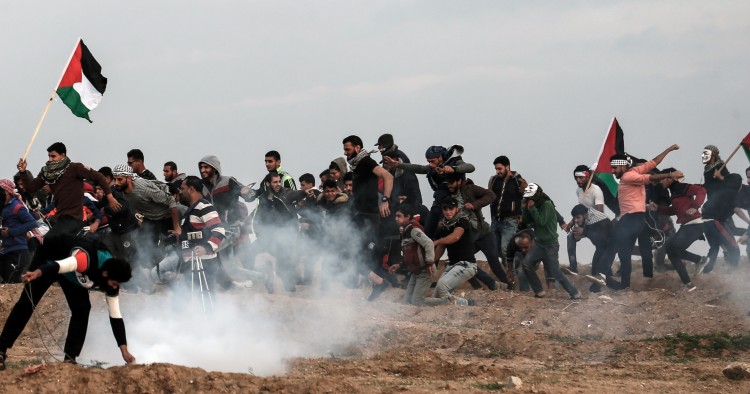 Once again Gaza is on the verge of an explosion. A perfect storm of security and economic issues threatens to destabilize the 365-sq-km territory, home to 2 million Palestinians who have known nothing but hardship and deprivation for generations.

Today’s crisis in Gaza is the consequence of three intersecting elements. At the heart of Gaza’s misery is Israel’s battle against Hamas, which has incited three wars and regular conflict across the border. The Israeli-controlled economic blockade is also an instigator of the military contest and keeps Gaza just on the internationally tolerable side of penury and malnutrition. Finally, there is the debilitating battle for influence and control between the militarily dominant Hamas and the sclerotic Palestinian Authority, led by President Mahmoud Abbas, who rejects any effort to relieve Gaza’s despair as long as Hamas rules.

Every year international organizations turn their attention to the Gaza Strip as part of the annual meeting of the UN General Assembly. For more than a decade, reports have chronicled Gaza’s manufactured descent into hopelessness and deprivation with growing urgency. The latest World Bank report on Palestine charges that Gaza's race to the bottom is accelerating. It reiterates that Gaza's peril is entirely man made and is the result of a monumental failure of leadership by those claiming a role in its future. “The status quo in Gaza is unsustainable and has incalculable socioeconomic and human consequences,” the World Bank reported earlier this year.

“(I)t is of utmost importance that efforts are conducted by all parties to help Gaza escape its deteriorating trajectory,” the report stated. It went on to add, "(T)he combination of multiple episodes of war, the blockade and internal challenges have had a huge toll on Gaza’s economy. Unemployment and poverty have reached staggering rates and the quality of life for the large majority of Gaza’s citizens is hardly bearable. The feeling of hopelessness has been pervasive. … The recent decline in incomes for a large share of Gazans has significantly worsened the situation, causing Gaza to be ‘on the verge of collapse.’”

These warnings have long ago ceased to excite the international community to effectively demand an end to Gaza’s travails. Diplomats are fatigued by the failure of U.S.-led efforts to turn the now moribund and discredited Oslo process into sovereignty for Palestine and peace with Israel. A new generation of officials no longer remembers the enthusiasm that once attended efforts to solve the Palestinian problem. When they look at Gaza today, they see only an endemic crisis with irreconcilable demands from its architects. Today’s efforts have produced diplomatic stalemate, chronic instability, and regular civilian casualties across Gaza’s border with Israel. However intolerable, Gaza’s predicament serves the interests of contesting parties better than any alternative.

Israel is the prime architect of Gaza’s penury, claiming the credit for putting Gaza “on a diet” more than a decade ago. This was more than one year before Hamas took control of the Strip from the Fatah-led Palestinian Authority. “The idea is to put the Palestinians on a diet, but not to make them die of hunger,” explained Dov Weisglas, an aide to then Prime Minister Ehud Olmert.

The modulated blockade made Gaza the only place on the planet where exports are effectively forbidden and the import of everything from petrol to diapers is strictly regulated as part of Israel’s campaign against Hamas. The embargo was also part of the broader effort, inaugurated by Israel’s then Prime Minister Ariel Sharon in 2004, to force Gaza to become Egypt’s ward in the wake of Israel’s evacuation from the area.

But like all previous battles since 2007 the next war promises neither peace nor victory.

Notably, Israel’s security and intelligence arms now realize that the campaign to unseat Hamas has failed, and that the “diet” is a force for instability rather than for a stable border regime that keeps Israeli communities on Gaza’s periphery out of harm’s way.

Negotiations shepherded by Egypt appear to be making progress in establishing a new, more stable chapter in the ongoing conflict. But instability remains at the heart of the Gaza standoff.

According to a recent report in the Lebanese daily Al-Akhbar, a step-by-step, 10-point plan is now on the table.

1. Hamas will restrain demonstrations along the Gaza border fence and punish protesters who do not heed organization's orders.

2. Weekly “March of Return” demonstrations will cease at the end of the year.

3. Flotillas embarking from Gaza towards the Strip's naval border with Israel will cease.

4. Egypt will work to lift 70 percent of the economic siege imposed on Gaza until the complete termination of the protests.

5. Gaza's fishing zone will increase up to 14 nautical miles.

7. Egypt will work to implement the currently moribund prisoner exchange deal between Hamas and Israel.

8. A “calm” of at least three years on the Gaza border will be established under international supervision under the auspices of the United Nations and Russia.

9. The Rafah (Egypt) crossing and additional crossings for transferring goods into Gaza to support the Strip's power station and infrastructures will be opened.

10. Economic rehabilitation projects will be launched to provide 30,000 jobs for university graduates in Gaza.

The draft has yet to be finalized.

Neither Israel, the PLO, Hamas, nor Egypt should escape responsibility for the deteriorating prospects of a generation. But if these stakeholders are unable to solve the problem, the very least they can do is stop the guns and open the borders.