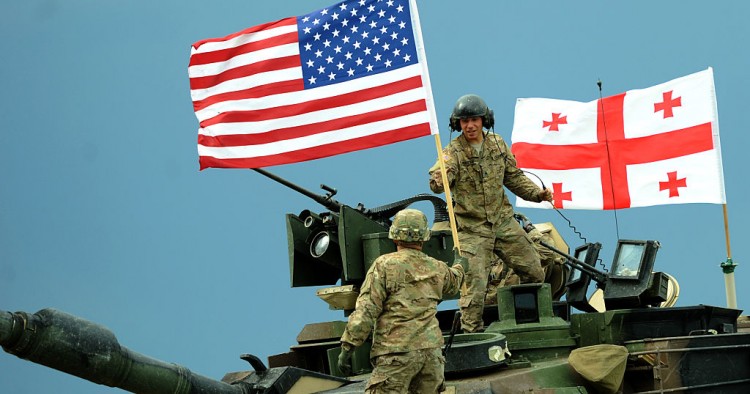 Following the dissolution of the Soviet Union, an independent Georgia found itself challenged by the separatist movements backed by the Russian Federation in the Abkhazia and Tskhinvali regions, leading to civil war in the early 1990s. Since then, Russia has acted as a main destructive actor in the development of Georgia and its statehood, as demonstrated with the Russia-Georgia War of 2008 and the 20 percent of Georgian territory still under Russian occupation.

NATO integration and military cooperation with the United States are the two most significant driving forces behind Georgia’s military reform and hopes of countering Russian aggression. There is widespread consensus within Georgian society of the need to pursue NATO membership through full commitment to compatibility and interoperability with the NATO Standard Operating Procedures.

The conflicts in the Abkhazia and Tskhinvali regions have significantly hindered the state-building process of an independent Georgia. The formation of Georgia’s security and defense institutions in the early 1990s were carried out amidst power struggles between the independent paramilitary units and the civilian government.

While the NATO Partnership for Peace Program, launched in 1994, provided a new platform for Georgia to upgrade its relations with the West, the weakness of Georgian state institutions at that time meant initial NATO-Georgia cooperation was also weak and lacked substance[i]. Against this backdrop, military subordination to the civilian leadership was enforced only towards the end of the millennium, and with improved civil-military relations Georgia was able to upgrade its relations with NATO. Georgia’s participation in international peacekeeping missions began in 1999 by deploying the first 34 peacekeepers to NATO’s Kosovo Mission (KFOR). Following improved defense force posture and increased political interest towards contributing to international security, Georgia increased its contribution to a total of 2 225 military personnel for KFOR.

The first time Georgia declared its aspiration for NATO membership was in 2002, coinciding with increased U.S. interest towards to the country. Following the September 11 attacks, Georgia joined the Global War on Terror and in 2002, the U.S. initiated the Georgia Train and Equip Program (GTEP) which assisted Georgian security forces with internal terrorist threats in Pankisi Gorge. Later, GTEP became a foundation for the Georgian Sustainment and Stability Operations Program (GSSOP), which trained Georgian forces for U.S.-led peace support operations in Iraq and enabled Georgia’s contribution of 2 300 troops to the U.S.-led coalition forces.

Territorial defense is the primary responsibility of the Georgian Defense Forces and also remains at the forefront of U.S.-Georgia military cooperation. Through the Georgian Defense Readiness Program (GDRP) (2017-2021), the U.S. is assisting Georgia in improving combat readiness and achieving self-sustaining institutional capacity to train a force prepared to accomplish national missions. U.S. bilateral assistance, combined with Georgia’s engagement in NATO’s international training programs, exercises and missions, has significantly increased military professionalism within the Georgian Defense Forces.

During almost three decades of regained independence, Georgia has gradually expanded its geopolitical outlook. Georgia has a 360-degree perspective on its security environment and the nature of threats. Tbilisi identifies itself as the Black Sea and South-East European state with a role in connecting the East and West. Georgia is increasingly viewed by the U.S. as an important actor in the transatlantic security architecture, demonstrated through the 2009 United States Georgia Charter on Strategic Partnership, the 2016 Memorandum on Deepening Security and Military Cooperation, and the three year Georgia Defense Readiness Programlaunched in 2017.

Meanwhile, Georgia’s contribution to international missions increased both in terms of quality and quantity through its participation in the International Security Assistance Force (ISAF) in Afghanistan. Despite Georgian international peacekeepers being called back to serve in the Russia-Georgia War, Georgia remained committed to its international responsibilities. In 2009, Georgia renewed its support of the NATO mission in Afghanistan with an initial deployment of 173 soldiers, increasing to 749 troops in 2010 and 1 571 troops in 2012. Since 2004, Georgia has deployed more than 20 000 servicemen through ISAF and then later the NATO-led Resolute Support Mission (RSM), becoming a leading non-member contributor. Participation in international missions has also widened the scope of civil-military relations in Georgia. By joining these peacekeeping missions, Georgia has presented itself as a responsible international actor.

America’s bilateral cooperation with Georgia has not only contributed towards capability building within the Georgian Defense Forces, it has also had overwhelming influence over Georgia’s understanding of its role within the regional security context. Over two decades, successive Georgian governments have prioritized Euro-Atlantic integration as a core pillar of Georgia’s foreign policy. This is an important way for Georgia to position itself as a strategic partner to the Transatlantic Alliance, promising enhanced cooperation and increased interoperability. According to Major General Nikoloz Janjgava, the first deputy chief of the Georgian Defense Forces, by standing with the U.S. and NATO countries where they need it the most, Georgia aspires to become “a household name, rather than an exotic country for NATO member-states.”[iii]

US and NATO influence on Georgia's military outlook

Frozen conflicts in the Abkhazia and Tskhinvali regions, and defending Georgia’s territorial integrity against an aggressive Russia, are the core responsibilities for the Georgian Defense Forces. Georgia’s aspiration to become a NATO member state stands at the forefront of Georgian foreign and security policy. NATO membership provides incentives for Georgia to deter Russia, as well as to integrate into the transatlantic community. United States bilateral military cooperation with Georgia and continuous support in the NATO integration process not only improves the capacity of the Georgian Defense Forces but also reiterates America’s commitment to peace and stability in the Black Sea region. Thus, Georgia’s participation in NATO multilateral programs, including the contribution to international missions, represent the extension of protecting national security interests.

Rusudan Zabakhidze is a fellow with MEI's Frontier Europe Initiative and a research development consultant for Council for European Studies at Columbia University (CES). The views expressed here are her own.

[i] Interview with Davit Darchiashvili, Former member of the Parliament of Georgia, professor, interviewed by Rusudan Zabakhidze on 14 April, 2019 at Ilia State University

[iii] Interview with Nikoloz Janjgava, the First Deputy Chief of Defense Forces of Georgia, interviewed by Rusudan Zabakhidze on 15 April, 2019 at Ministry of Defense of Georgia.