Georgian Elections 2020: A strong mandate for democratization and Westernization 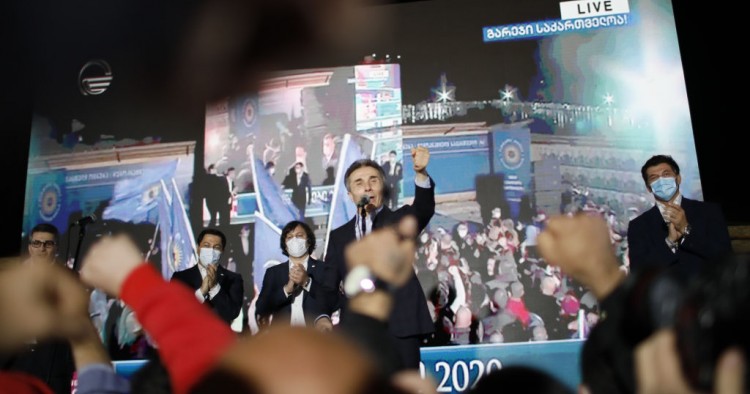 Georgia’s parliamentary elections resulted in an expected landslide victory for the ruling party, Georgian Dream (GD). The Economist Intelligence Unit predicted a major gain for the incumbent party, motivated primarily by their spectacular managing of COVID-19. GD’s leadership team are indeed entitled to give themselves credit for their governing during the pandemic, but this is not the only reason they have secured another term. Their win was also empowered by the primary opposition, which adopted a flawed campaign strategy, weakened by its most powerful and divisive figure, Mikheil Saakashvili.

The opposition’s political strategy focused on two issues. GD and its billionaire leader Bidzina Ivanishvili have been accused of backsliding the country’s democracy and of ties with Russia. But during the eight years of GD leadership, Georgia has made significant progress on both democratization and Western integration. Georgia’s actual weak spot is the economy. Despite constant economic growth, 20 percent Georgians still live in poverty. The next four years will place enormous pressure on the ruling party to navigate Georgia out of the post-pandemic economic crisis. If the opposition can build a coherent political strategy focused on policies geared toward a strong economic reform program, they will stand a much better chance in Georgia’s 2024 elections.

Georgia’s opposition has experienced internal fragmentation and polarization, driven largely by the increasingly controversial Saakashvili, known amongst many in the West for the 2008 Georgia-Russia War and for extreme public moves like threatening to jump off a Kiev rooftop. After he was voted out in 2012, Saakashvili lost his Georgian citizenship, gained Ukrainian citizenship (which was later revoked and re-bestowed), was sentenced in Georgia in absentia for abuse of power, and is now de facto running in the Georgian elections from Ukrainian self-exile. Meanwhile, Saakashvili’s ongoing presence has not fared well with the Georgian public. Voter turnout during Georgia’s 2018 presidential elections increased in the second round by 10 percent, with voters mobilizing against the opposition.

While the opposition’s campaign focused on democratic backsliding and foreign policy, the reality is that Georgia has fared well over the last eight years and GD has stayed on the path of democratization and reform. According to Western standards of democracy, Georgia has made tremendous progress over the last eight years. Transparency International’s Corruption Perceptions Index scores Georgia higher than EU members Greece, Slovakia, and Italy. Georgia ranks 12 worldwide in terms of economic freedom, up from 26 in 2010 and ahead of many EU countries. On press freedom, Georgia ranks 60 in the world, slightly better than Poland and significantly better than a decade ago when Georgia ranked 100. And last year, the World Bank placed Georgia in the world’s top seven countries for Ease of Doing Business (and first in the region).

The incumbent party’s willingness to give into the opposition’s pressure and modify the electoral system to a proportional one has resulted in changes enshrined into Georgia’s Constitution, effective in 2024. But the opposition refused to vote on these constitutional changes and initiated protests to pressure parliament into changing the electoral process for the 2020 elections. Negotiations between the ruling and opposition parties, brokered and commended by the West, resulted in a part-proportional voting system for the 2020 elections.

Electoral reform negotiations between GD and opposition parties also set the minimum required votes on forming a government at 40 percent, mostly because the opposition thought GD could not reach the threshold. But a remarkably well managed COVID response strengthened the incumbent party in the polls, enabling GD to stay in power for a third term with over 48 percent votes in the first round. At the same time, the limit set for entering parliament has been negotiated to just 1 percent of votes, enabling a considerable number of opposition parties to enter parliament. This means that opposition parties have the potential to strengthen and significantly increase their power before the next elections.

Georgia’s opposition parties have accused GD of harboring anti-Western sentiments. In reality, GD has maintained a steady and strong pro-Western policy, shoring up American and EU support. Georgia is a leading recipient of U.S. foreign and military assistance in Europe and Eurasia. In 2014, GD finalized negotiations with the EU and implemented in 2016 the Association Agreement, permitting the country’s vital access to the single market. The Georgian Parliament also initiated an amendment to enshrine Euro-Atlantic integration into Georgia’s Constitution. The amendment was successful, reflecting the constant popular support of between 74 and 77 percent for NATO accession, and 82 percent for EU integration. But the opposition once again refused to vote on this, effectively removing the bipartisan consensus Georgia needs for Western integration.

Recent IRI polls showed that for an overwhelming majority of Georgian voters, the economy and unemployment were the major factors driving their vote. In the last decade, Georgia experienced an average GDP growth of around 5 percent and the IMF forecasts 5 percent growth in 2021, the highest in the region. This year, however, Georgia’s economy will shrink by 5 percent due to the global economic crisis. The government has so far been able to secure economic support from the EU and international financial institutions to fight the COVID-19 crisis but will face a significant challenge in attracting Western investment in the years to come to maintain economic growth and reduce poverty levels.

The Georgian Dream government managed the pandemic too well not to ensure a landslide. Georgia’s 2020 free and fair elections secure the country’s position as a regional beacon of democracy. Such well-deserved democratic progress shines bright in the context of democratic backsliding across Central and Eastern Europe, and even brighter when considering the regional context of Russia, Turkey, Syria, Iran, and the conflict between Armenia and Azerbaijan. Georgia’s ruling party will face two major challenges over the next four years: first, a proportional electoral system which will institutionally strengthen the opposition, and second, the most difficult economic recovery it has seen in a decade of power.

Iulia Joja is a senior fellow for MEI's Frontier Europe Initiative. The views expressed here are her own.