The growing threat of Iran’s speedboats 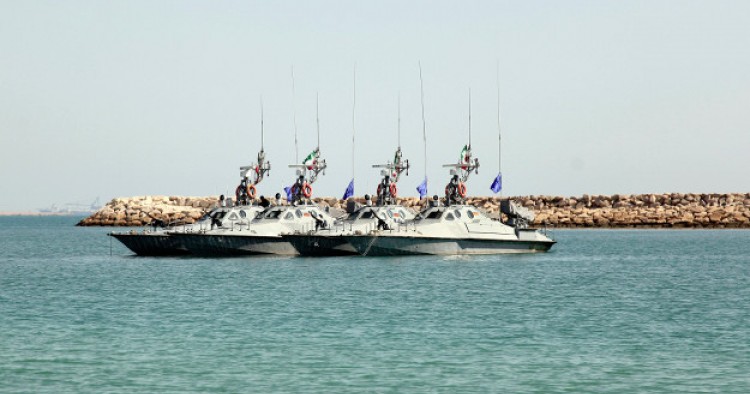 Iran’s Defense Ministry today unveiled a new propulsion system for military speedboats, Tasnim News Agency, which is affiliated with the Revolutionary Guards, reported. “The maritime propulsion system, which allows military speedboats to reach higher velocities, leads to lower fuel consumption, and increases maneuverability in shallow waters, is also equipped with automatic running systems,” Brigadier General Qassem Taqizadeh, the deputy minister, pointed out. The system has a mobile shaft for transmission of power as high as 1,800 horsepower. The ministry also introduced a protection system for military and civilian vessels.

Comment: In recent years, Iran has developed more advanced speedboats as part of a broader effort to upgrade its naval capabilities.

Last year, Islamic Revolution Guards Corps speedboats repeatedly harassed American vessels in the Persian Gulf. In March, for example, the USNS Invincible and three British vessels were forced to alter course in the Strait of Hormuz when two Iranian speedboats approached them as close as 550 meters. US officials said such incidents happened regularly and warned that Iranian provocations may lead to miscalculations and dangerous confrontations in the future.

In May, the chief of staff of the Iranian Armed Forces hinted that the country’s naval forces would use speedboats manned by “martyrdom-seeking combatants” against the US Navy in case of a naval warfare in the Persian Gulf. “These boats are not just a piece of equipment; they are a culture,” Major General Mohammad Hossein Bagheri said at a conference on speedboats in Tehran.  “The combatant that mans it is inspired by faith and trust in God and the martyrdom-seeking spirit of Ashoura [a major religious commemoration of the martyrdom of Prophet Muhammad’s grandson at Karbala]. He shuts his eyes to worldly attractions and steps into jihad [holy war] against the infidel front. He is ready to sacrifice his life,” Bagheri added.

He described the new IRGC speedboats as a “miracle” that will enhance Iran’s deterrence power against the United States and other foreign enemies. He continued: “We have encountered hostility and threat from America since the outset of the revolution’s victory [in 1979]. Successive administrations that have come to power in this country [the United States] have threatened the Islamic Republic of Iran with different words yet in similar ways. And these threats are primarily sea-based.” He warned that although the US and its allies have extensive and powerful naval presence in the Persian Gulf and have taken advanced measures to protect them, “they are vulnerable and will suffer heavy losses and casualties.”

Bagheri’s remarks indicate that to counter the US naval supremacy in the region, Tehran may employ “swarm tactics” and has put increased emphasis on fast-moving vessels that could inflict severe damage to US naval forces in a potential war. In the past, the IRGC has blown up large target vessels mimicking US aircraft carriers in mock exercises by missiles and swarms of Iranian gunboats in the Strait of Hormuz.

US military officials say IRGC speedboats have recently halted the routine harassment of American naval assets in the Persian Gulf, but they are unsure about what may have prompted a change in the IRGC Navy’s behavior or whether the change is only short-term because of the Trump administration’s tougher stance on the Islamic Republic.