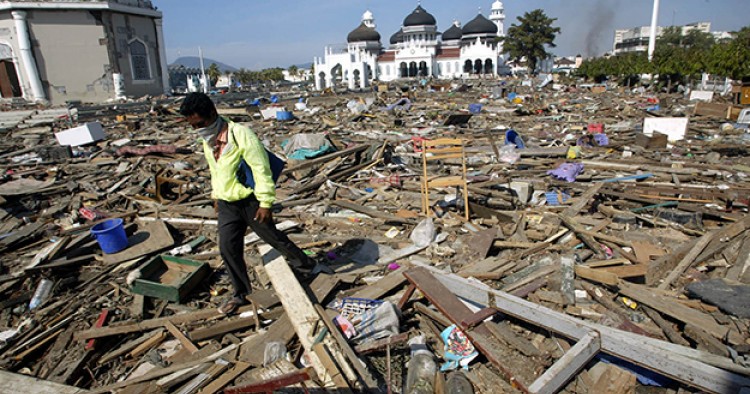 While there have been studies on the development of Islamic philanthropic organizations in fostering social welfare in Southeast Asian countries such as Indonesia and Malaysia, the role of international Islamic aid agencies, including those from Gulf countries, in their dealings with Southeast Asian domestic welfare issues remains unexplored. This essay discusses the growth of Gulf charitable organizations operating in Southeast Asia, particularly the reasons for this phenomenon and the types of activities in which these organizations are engaged, and then takes an in-depth look at two Gulf charities that are active in Indonesia, namely the United Arab Emirates’ (UAE) Asian Muslim Charity Foundation (AMCF) and Qatar Charity.

In the aftermath of 9/11 and other violent attacks involving Muslim radical groups that took place in some Asian and African countries, a number of Islamic charitable organizations were shut down by the international community under pressure from the United States and the United Nations. However, this did not halt the proliferation of Islamic charitable organizations. Instead, many Muslim countries have witnessed an unprecedented development of charitable organizations with different religious and political ideologies.[1] Gulf charities in particular have become more active in conducting relief missions in disaster-affected spots. The involvement of such charities as the World Assembly of Muslim Youth (WAMY), the International Islamic Relief Organization (IIROSA), Qatar Charity, the Asian Muslim Charity Foundation (AMCF), and Kuwait’s Jam‘iyyah Ihya al-Turas in disaster relief reflects the current type of Muslim social activism.

There are two main reasons why Muslims’ eagerness to operate charitable organizations worldwide has increased. First, the idea of the umma (the Islamic community) is an essential concept utilized by Muslims in projecting their social, economic, and political activities. Fostering the welfare of the umma, as conceived by Muslim NGOs, may comprise a wide range of meanings, such as protecting Muslim communities from threats, strengthening Muslim economic activities, and upholding the superiority of Islam in the social and political spheres. Through their aid, Muslim NGOs can also become political actors as “others suspect them of using aid to enlarge the umma.”[2]  Secondly, Gulf charities have witnessed the process of modernization of aid, which Marie-Juul Petersen has labeled “developmentalizing Islamic aid,” meaning the endeavors of Muslim NGOs “to adjust their ideologies to the culture of development aid, thereby hoping to create resonance with other international agencies.”[3]

These two factors have been instrumental in driving the presence of Gulf charities in Southeast Asia. This is partly because, over the centuries, Islam has had a “special” place in Southeast Asian countries such as Indonesia, Malaysia, and Brunei, where Muslims are in the majority. Indonesia is the world’s largest Muslim country, while in Malaysia Islam is the state’s official religion. Likewise, in Brunei, Islam has for many years become part of the sultanate’s social and political culture. Unsurprisingly, Islamic laws have been partially implemented in these three countries. This does not, however, mean that in Thailand and the Philippines, where Muslims are in the minority, Islam is less important. In the southern provinces of Thailand (Pattani, Yala, and Narathiwat) and the southern Philippines (Mindanao), Islam has been a determining factor in shaping the population’s religious, social, and political identity.

It is under these circumstances that Southeast Asia has experienced an increasing presence of Gulf charities and an intensified contact with the Middle East. Petrodollar country-sponsored Islamic charitable associations have played extensive roles in dakwah (religious propagation), education, social work, and disaster relief. For years, many Islamic schools and orphanages in Southeast Asia have received considerable support from Gulf charities. Likewise, a number of dakwah associations in Indonesia, Malaysia, and Thailand have established partnerships with Gulf charities.

One of the most notable cases representing the engagement of Gulf charities in disaster relief in Southeast Asia was in regard to tsunami relief in coastal areas of Aceh, Indonesia. The 2004 tsunami killed thousands of people and devastated hundreds of villages and in turn stimulated the flow of money from the outside world to the disaster-affected regions. Gulf charities in particular became some of the major players in providing supplies and managing reconstruction programs.[4] In the aftermath of tsunami relief, Gulf charities remained active in sponsoring various types of social and religious activities by supporting the establishment of mosques, orphanages, and Islamic schools. A similar case was in Java in 2006 after a devastating earthquake ruined villages in southern parts of Yogyakarta and Central Java. Not only did Gulf charities deliver aid to the disaster victims, but they also developed a closer partnership with local Muslim organizations in the educational, religious, and social sectors.

Muslims in southern Thailand have also faced a great deal of social and economic difficulties due to the long-term conflict between Pattani Muslims and the Thai central government. Here, too, Gulf charities have taken part in sponsoring the establishment of mosques, religious schools, and charitable foundations. In Yala Province, where Islamic College was founded, Muslim leaders receive money directly from Saudi’s philanthropists in order to financially support those students most in need. In a conflict spot like Pattani, the engagement of Gulf philanthropists and charitable organizations in supporting needy Muslims is considered problematic by the Thai authorities, as the government views the flow of money as a form of political support for rebels or as a tool to radicalize Pattani Muslims.[5]

The problems faced by Muslim communities in Mindanao in the Philippines have also stimulated Gulf charitable organizations to operate development aid projects, such as poverty alleviation and welfare-oriented activities. The Ancop GK Bahrain in the Philippines, for example, has made an attempt to revitalize slums in Mindanao by building 700,000 dwellings in several villages. Likewise, when Typhoon Haiyan hit some areas in the Philippines in 2013, the Mohammad Bin Rashid Charity and Humanitarian Establishment (MBRCHE) immediately sent aid.[6]

In short, the linkages between Southeast Asian Muslims and transnational movements from Gulf countries have had a considerable impact on the flourishing of foundations working on religious propagation and social services, as well as the spread of Islamic relief NGOs in such countries as Indonesia, Malaysia, Thailand, and the Philippines.

Dakwah and Education in Depth

The first organization considered here is the Asian Muslim Charity Foundation (AMCF) of the UAE, which represents one of the most active dakwah movements in Indonesia. The establishment of this foundation can be traced to 1992, when the Muhammadiyah (a modernist association founded in 1912) and the Dar al-Bir Society made an agreement to establish a joint secretary to run programs in education, relief, and social activities. Under the banner of Yayasan Muslim Asia (the Asian Muslim Foundation), the AMCF has officially been registered with Indonesia’s Ministry of Law and Human Rights since 2002.

The second organization is Qatar Charity, which was founded by Qatar’s emir, Sheikh Hamad bin Khalifa al-Thani, in 1992 and has emerged as a nonprofit organization specifically working on three main programs: sustainable development, preparedness, and disaster response. As an outcome of the memorandum of understanding with Indonesia’s Ministry of Religious Affairs in 2002, Qatar Charity Indonesia (QCI) founded its branch office in Jakarta in 2006. Like other Gulf charities, both the AMCF and Qatar Charity are very much concerned with education and dakwah. They have been instrumental in financing the establishment of mosques and in developing Islamic education in urban and rural areas, including in isolated regions and outer islands.[7] Qatar Charity has reconstructed mosques mainly in disaster-affected areas, whereas the construction of new mosques has been carried out within Islamic schools. In 2011, Qatar Charity constructed or reconstructed 41 mosques in Java and Sumatra. Meanwhile, the AMCF recently built and reconstructed 850 mosques throughout Indonesia.

Qatar Charity is known for its rigorous support of the establishment of Islamic schools run by local Muslim communities. In Indonesia, especially after the decline of Suharto’s New Order regime, Muslim groups affiliated with the Islamist PKS (Prosperous Justice Party) have initiated the operation of full-day Islamic schools, referred to as SDIT, or Sekolah Dasar Islam Terpadu, meaning “integrated Islamic school.” SDITs have been popularized by the members of tarbiyah (education and upbringing) movements. This full-day schooling system provides an education that differs from that offered by the traditional Islamic boarding schools (pesantren) and from that provided in conventional state schools. SDITs can even compete with long-established schools that belong to other Muslim organizations, both modernist and traditionalist. This is partly because the Muslim middle class and especially upper middle class have become increasingly interested in enrolling their children in SDIT schools rather than conventional Islamic schools.

Just like Qatar Charity, the AMCF has been active in sponsoring Islamic education. The AMCF has strongly supported the establishment of the Islamic Higher Education Institutions (Ma‘had ‘Ali) that concentrate on Arabic and Islamic studies. The AMCF does not work alone in running its educational institutions. Instead, it has engaged long-established Islamic universities that belong to the modernist movements, such as Muhammadiyah and Persatuan Islam (Persis). The AMCF’s Ma‘had ‘Ali can be found in areas of Java and Sumatra and are mainly attached to Muhammadiyah higher educational institutions, such as Muhammadiyah University of Yogyakarta, Muhammadiyah University of Surakarta (Central Java), and Muhammadiyah University of West Sumatra. Meanwhile, in Bandung, West Java, the AMCF has cooperated with Persis. The AMCF very rarely attempts to establish a partnership with traditionalists, such as Nahdlatul Ulama. The Ma‘had ‘Ali have been instrumental in educating and producing many young preachers, some of whom have been sent for da‘wa (missionary work) on the outer islands.

Although the AMCF and Qatar Charity share many similarities, differences can be seen in their involvement in disaster relief. The AMCF has acted more as a da‘wa organization than a relief agency. Also, the AMCF’s “development perspective” is restricted to the provision of Islamic education, and is not involved in the social and economic sectors. By contrast, Qatar Charity has intensified its relief and development programs, such as health care (for children, families, and women), the environment (in regard to water, sanitation, and hygiene), education, and culture.[8] It should be noted that both Qatar Charity and the AMCF require volunteers with a strong background in Islamic education, and these volunteers are mainly close to the modernist circle. In particular, the volunteers who have been appointed to lead Qatar Charity and AMCF sub-field offices are mainly graduates of Islamic universities in Indonesia or the Middle East.

The engagement of Gulf charities with domestic issues, particularly disaster relief and poverty, in Southeast Asia, including Indonesia and Thailand, has increased both in quantity and quality since 9/11. In many cases, Gulf Islamic charitable associations can operate in Indonesia unimpeded. In Thailand, even though Muslims are a minority and the government has kept the transfer of aid to Muslim communities under surveillance, especially in southern Thailand, Muslims still can work together and establish partnerships with Gulf philanthropists through both informal and official networks to run dakwah and Islamic education. Therefore cultural propinquity between international charities and domestic civil society organizations has led to an open reception from domestic organizations to transregional aid agencies. It is unsurprising that in order to strengthen reciprocal relations with domestic civil society organizations, international Islamic charities have supported religious and social activities in the communities. This support in some ways has shaped a particular pattern of Muslim social activism as well as religious and political orientation.

[3] Marie Juul Petersen, “For Humanity or for the Umma: Ideologies of Aid in Four Transnational Muslim NGOs,” Dissertation, University of Copenhagen, 2011, 15-16.