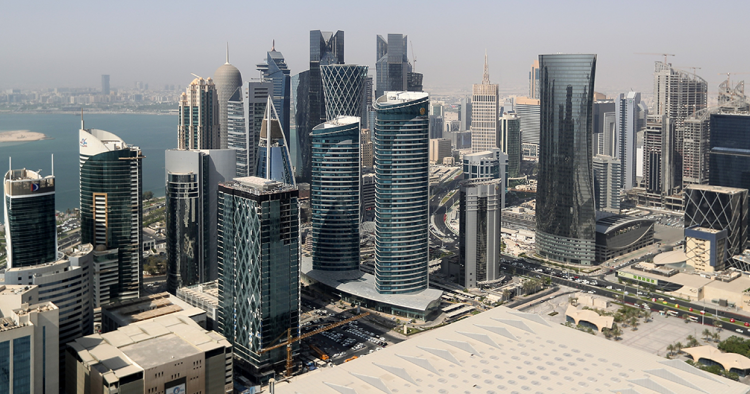 After achieving respectable economic growth in 2021 despite the persistent fallout from the pandemic, the Gulf Cooperation Council (GCC) member countries now face the risk of monetary (over) tightening. This is due to the need to follow the interest rate adjustments made by the U.S Federal Reserve to maintain the currency peg arrangements between GCC currencies and the U.S. dollar.1 The failure to do so would likely lead to large capital flows out of the region in search of higher rates of return on investment, with destabilizing impacts on the Gulf financial system.

The expected increase in interest rates is not warranted, however, as the GCC economies currently face relatively moderate inflation. Instead, they should use the available fiscal space to mitigate the negative fallout of monetary tightening (and other negative supply shocks) and make greater use of public-private partnerships (PPPs) for future infrastructure development.

Meanwhile, inflation has remained moderate, averaging 3.6% in 2022 compared to the U.S.’s 9.1%.2 This is due to a minimal increase in the cost of housing and other services (so-called non-tradable goods and services, whose prices depend on domestic supply and demand), while the prices of tradable goods and services are expected to increase by the rate of global inflation plus or minus the expected appreciation or depreciation of the U.S. dollar.

The discrepancy between the economic outlook in the GCC and that of the anchor economy (the U.S.) points to a mismatch in the business cycle: GCC economies appear to be expanding, whereas the U.S. economy is contracting. Therefore, the only reason policy interest rates in the GCC are kept in line with those of the Fed is the need for consistency given the currency peg arrangement with the U.S. dollar.

Despite recent monetary tightening in the GCC in tandem with moves by the Fed, liquidity in the region has remained sufficient. This is largely due to the rise in oil and natural gas prices since the beginning of the war in Ukraine, which has resulted in a significant increase in liquidity. A strong bank-deposit base in particular, increasing year-on-year (y-o-y) up to May 2022 by 10.0% in Saudi Arabia, 7.5% in Kuwait, and by 23.3% in Oman, allowed banks to loosen lending standards and increase credit,3 which in turn rose y-o-y by 8.7% in Kuwait, 14.1% in Saudi Arabia, and 24.7% in Oman.4

Therefore, it can safely be assumed that, by and large, monetary authorities in the GCC did what they could to counter the supply shocks of the pandemic and the war in Ukraine, providing the economy with the needed financing. Nonetheless, more can be done on the fiscal front, taking advantage of the available fiscal space.

Use the available fiscal space to boost growth

One major advantage GCC economies enjoy is the available fiscal policy space resulting from their accumulated savings in sovereign wealth funds (SWFs). Recent estimates put the total SWF assets for these countries at $3 trillion, with $1.19 trillion for the UAE alone.

Part of these savings were transferred to the government budget and along with higher international hydrocarbon export receipts helped to maintain a fiscal surplus in the GCC.5 This is projected to come in at 6.6% of GDP in Kuwait, 5.6% in Oman, 8.5% in Qatar, 5.5% in Saudi Arabia, and 8.1% in the UAE in 2022; Bahrain is the exception and is expected to run a deficit of 3.3% of GDP.

With the total value of planned and unawarded projects in the GCC countries expected to reach almost $2 trillion, it is clear that PPPs — partnerships between private corporations and public entities that allow for joint funding and operation of projects — are needed for sustained development.6 The PwC report on PPPs in the Gulf points to the uncertainty surrounding the supporting legal framework as the main obstacle to their use in the GCC — outside the energy and utilities sectors — and recommends various improvements, including:

Putting the pieces together

As global economies become prone to unexpected supply shocks, it is important to rethink the economic policy toolkit. With the exchange and interest rate policy outsourced to the Fed, the GCC countries would do well to make greater use of the available fiscal space so that they can pursue more expansive fiscal stimulus, supported by more active PPPs for infrastructure development, to mitigate the monetary tightening underway. Going forward, this will require improvement in the medium-term fiscal framework, a formal fiscal-monetary coordination process, and the graduation to a counter-cyclical fiscal policy set-up.

Mohamed Z. Bechri is a former economics professor at the University of Sousse in Tunisia. He served as the principal economist at the Central Bank of the UAE from 2001 to 2022 and was an economist with the IMF's African Department in 1993-95. The views expressed in this piece are his own.