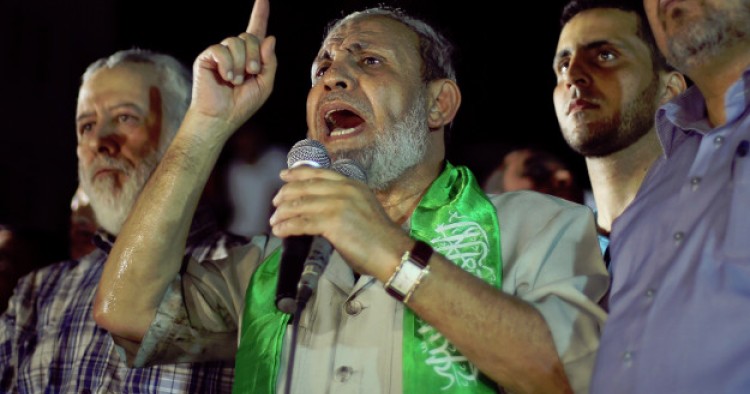 A senior official of the Palestinian Hamas has called on Iran to organize an international conference of Islamic countries to condemn the Trump administration’s decision to move the American embassy to Jerusalem. “The presence of Israeli occupiers in any part of Palestine is illegal and illegitimate,” Mahmoud al-Zahar, a member of Hamas’ political bureau, said in an interview with Iran’s Tasnim News Agency, which is affiliated with the Islamic Revolution Guards Corps (IRGC). “We will not recognize the american embassy in either Eastern Jerusalem or Western Jerusalem,” he added. The Hamas official also stressed the need for a new intifada (uprising) against Israel. “The West Bank is an occupying territory and the Palestinians must resist the occupiers,” he stressed. Zahar also criticized the Palestinian Authority in the West Bank for “not allowing Palestinians to stage resistance against the occupiers.” He emphasized that Hamas will not reconcile with any Palestinian group that would maintain relations with Israel.

Comment: The Hamas official’s remarks came after the US State Department said that it will officially move the US embassy in Israel to Jerusalem by May.

Since the Trump administration first announced the move in December, Iranian leaders have been trying to exploit Trump’s decision to recognize Jerusalem as Israel’s capital to further strengthen Tehran’s ties with Palestinian militant groups. Soon after President Donald Trump’s speech on Jerusalem, President Hassan Rouhani and Quds Force Commander Qassem Soleimani called leaders of Hamas and other Palestinian militant groups to pledge Iran’s “all-out support” for their struggle against Israel. “We are confident that a new intifada will continue its path to attain the rights of the Palestinian nation,” Rouhani told Haniyeh over the phone, according to the Iranian media. Meanwhile, Soleimani told the leadership of the Palestinian Islamic Jihad and Izz ad-Din al-Qassam Brigades that other groups within the “resistance axis in the region” are also ready to defend the al-Aqsa mosque in Jerusalem.

One the one hand, Tehran is portraying itself as the “real” defender of Sunni Palestinians in an effort to change the regional perception that it is promoting a sectarian agenda by aiding only Shiite armed groups in the Middle East. Tehran also hopes that Washington’s decision to unilaterally declare Jerusalem as Israel’s capital would help Iran’s efforts, as one analyst wrote in IRGC-affiliated Tasnim News Agency, to further strengthen the “resistance front” in the region against the United States and Israel.

The read-out of Soleimani’s phone call did not disclose which regional groups the Quds Force commander was referring to as willing to help the Palestianian struggle against Israel, but several Iranian-supported regional Shiite groups have recently expressed readiness to join the fight against Israel once the battle against ISIS in Iraq and Syria is over. These groups include the Lebanese Hezbollah, Afghan Fatemiyoun Division, and Iraqi militia groups such as Harakat al-Nujaba and Asa’ib Ahl al-Haq.

Many Iranian leaders also claim that Trump’s decision justified their views that the only way to achieve a Palestinian state is through armed “resistance” rather than diplomacy. Ayatollah Ahmad Khatami, an aide to Khamenei, called for an uprising against Israel. “With this decision, Trump rejected all negotiations of the past seven decades and demonstrated that the only and only way to achieve the Palestinian aspiration is through intifada, which would change the Zionist regime’s daylight into a dark night. You should rage against this occupying regime; and the more you inflict damage to this usurper and criminal regime, the closer you have taken a step toward pleasing God,” he told worshipers during today’s Friday prayer in Tehran.