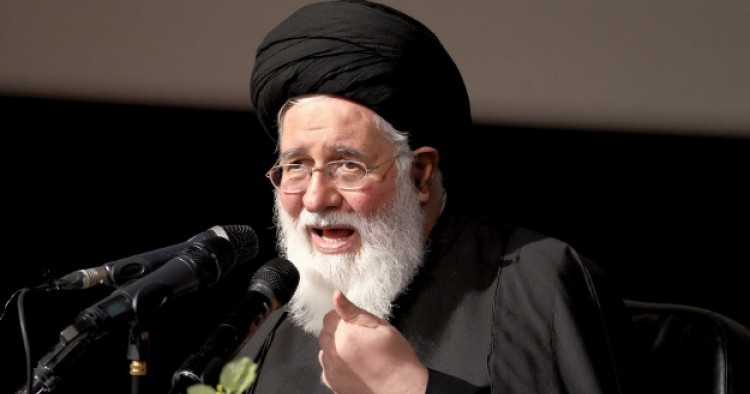 A prominent Iranian cleric today warned the Rouhani government against trusting European powers to renegotiate the Joint Comprehensive Plan of Action (JCPOA), the nuclear deal Tehran signed with world powers in 2015. “The Europeans are currently betraying [us] and defending the Americans. Do not make another European JCPOA with traitors and bravely avoid these deadly blows to the economy,” said Ayatollah Ahmad Alamolhoda, the Friday prayer of Mashhad and Supreme Leader Ali Khamenei’s representative to Khorasan Razavi Province. The hardline cleric argued that the nuclear deal has “brought humiliation” to Iran and called on the Rouhani team “not to repeat the same mistake by replacing the American JCPOA with a European JCPOA.” Alamolhoda claimed that “America is today weak and doomed” and urged the government to boldly resist American pressure. “When we criticized the [nuclear] negotiations, they called us coward, mentally disturbed and obsessive. But today they see that these objections were not unwarranted,” he concluded.

Conservative politicians and media outlets have also increased pressure on the Rouhani government not to hold talks with European powers over the country’s missile program or regional activities.

An article in Arman Daily, entitled “France’s Dual Positions and Iran’s Interests,” for example, echoed a similar view. It argued that the French foreign minister’s upcoming trip to Tehran to discuss Iran’s missile program and regional role has two objectives: “First, France wants to supplement the JCPOA, and second, it aims to side with America regarding the missile issue.” The author pointed out that European powers do not entirely agree with the Trump administration regarding the Iran nuclear deal, but cautioned that they would ultimately side with Washington because of their “extensive relations” with the United States.

Comment: As the Trump administration is increasing economic pressure on Iran and is threatening to “terminate” the Iran nuclear deal, an intense debate is taking place inside Iran about whether the Islamic Republic can count on European support to preserve the nuclear accord.

While the Rouhani government and reformists prefer to work closely with Europeans to “isolate” America and minimize the impact of new U.S. sanctions, hardliners see it as a mistake and believe that European countries will ultimately side with Washington not Tehran.

Last month, the head of Iran’s powerful Judiciary ruled out any negotiations with the United States and other world powers over the country’s controversial missile program, and warned European countries not to side with Washington in the latest U.S.-Tehran standoff. “The Europeans should understand that if they cooperate with America, we will stand up against them the same way we have confronted the United States,” Ayatollah Sadegh Larijani said. He particularly cautioned that Iran will not accept any demand to negotiate and relate the country’s missile program to the nuclear deal. “In addition to the nuclear issue and JCPOA, American officials’ statements predominantly focus on two issues: Iran’s missile power and the Islamic Republic’s presence in the region. The answer to both issues is clear and the U.S. officials need to pay attention to it,” Larijani added. “The Islamic Republic of Iran’s missile power is for defense and we will definitely not have any JCPOA-2 or JCPOA-3 and any negotiations about it.” He emphasized that Tehran will continue to further enhance its missile power and deterrence capabilities.

Larijani also defended Iran’s military involvement in regional conflicts, stressing that Tehran has deployed its forces to Syria and Iraq upon requests from the two countries’ governments. He further stressed that Iran “is present in its own geographical region” and questioned the U.S. intent on establishing military bases in faraway Middle East.

Similarly, Ayatollah Ahmad Khatami, a member of Iran’s Assembly of Experts and close aide to Khamenei, called on the Rouhani government “not to rely on European support because if Europe has to choose between Iran and America, it will choose America.”

Javan Online, a mouthpiece of the Islamic Revolution Guards Corps, wrote recently that Zarif’s idea to work with Europe to isolate America is unrealistic. It said the Rouhani team was similarly optimistic about negotiating with the United States, but all Iran got was more sanctions and more military threats. Javan also pointed to the latest proposal by France that the nuclear deal could be supplemented with “consultations” on loopholes within the accord, including the post-2025 period and Iran’s missile program. It argued that such talks show that Europe will still be keen to work with America against Iran in the future.

In contrast, officials within the Rouhani government and pro-Rouhani media outlets count on European support to prevent U.S. from walking away from the deal. The Rouhani government has waged a diplomatic offensive to gain European support to pressure Washington to remain committed to the nuclear deal. Iran daily, a government-run outlet that reflects the policies of the Rouhani team, for example, wrote that European countries, particularly the business community, support the nuclear deal and close relations with the Islamic Republic. The paper referred to a recent Iranian investment conference in Switzerland, in which Helga Schmid, secretary general of the E.U.’s foreign policy affairs, spoke in support of the nuclear accord to a large gathering of European business representatives.