Harvesting Water and Harnessing Cooperation: Qanat Systems in the Middle East and Asia 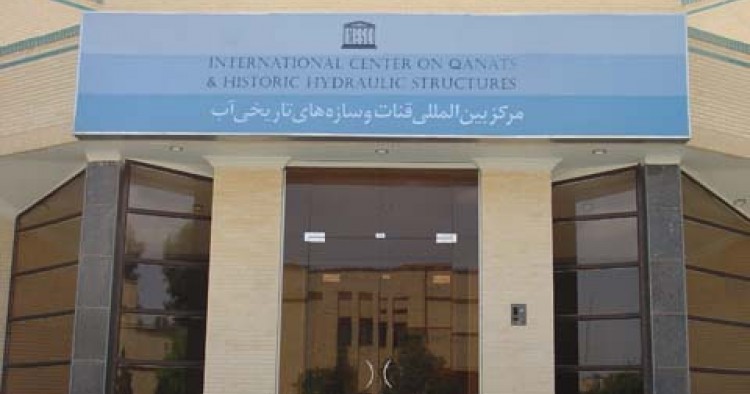 For centuries, human societies in drylands have overcome the challenge of water scarcity through traditional methods of water harvesting. The utilization of qanat technology is one of them.

Qanat is the generic term for an ancient environmentally sustainable water harvesting and conveyance technique believed to have originated in Persia in the early first millennium B.C.

The qanat system consists of a network of underground canals that transport water from aquifers in highlands to the surface at lower levels by gravity. This ingenious technology ― known as falaj In Oman, khettara or foggara in North Africa, karez or kanerjing in the northwestern desert of China, and karez in Afghanistan, Pakistan and Central Asia ― continues to provide reliable supply of water for human settlements and irrigation in hot, arid and semi-arid climates. In fact, qanat technology exists in more than 34 countries. In Iran alone, there are an estimated 50,000 qanats, nearly three-quarters of which are still working. In Oman, there are more than 3,000 active qanats (aflaj). 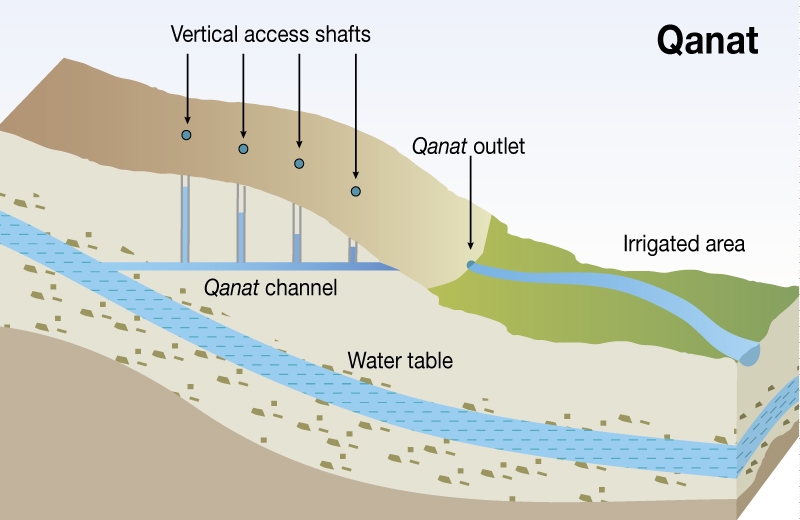 Qanats are a valuable part of the cultural heritage of the countries in which they are found. They are also a time-honored practical tool ― underpinned by mutual dependence and communal values ― for sustainable water management. Yet, many qanats have fallen into disrepair or have dried up. Many of those which remain active are threatened by silt sedimentation in canals, the urban migration of youth, and the decline of experts for managing such systems. In addition, some governments have begun to abandon traditional, sustainable water conveyance systems in favor of modern, less sustainable but more productive hydraulic systems.

At the same time, however, there is evidence of renewed interest in this ancient system of underground channels. There is a growing body of literature on the subject. In addition, the United Nations Educational, Scientific and Cultural Organization (UNESCO), the United Nations University (UNU), The International Center on Qanats and Historic Hydraulic Systems (ISQHS) in Iran, and the IPOGEA Traditional Knowledge Center are just a few of the increasing number of organizations that are encouraging the further study, conservation and rehabilitation of qanats and, more broadly, that are facilitating the search for ways to incorporate modern advancements with traditional knowledge about water resources management.

While qanat systems cannot replace modern advances in water resources management, they still have a role to play as a sustainable groundwater management tool. The essays in this series provide snapshots of the continued importance and potential of qanats in western China, Pakistan, Oman and Syria.

Qanats and Water Cooperation for a Sustainable Future
Joshka Wessels
Qanats are underground tunnel systems that bring infiltrated groundwater, surface water, or spring water to the earth’s surface using only gravitational force. Qanats have been used for irrigation and drinking water for centuries worldwide, particularly in the Middle East and North Africa and Central and West Asia. Although qanat technology is ancient, it is not anachronistic. The use of qanat systems could prove crucial in mitigating the effects of the world water crisis in the dry areas where they are found. However, this potential is being squandered as qanats are falling into disuse and are being abandoned at a rapid pace.

The water harvesting and underground transmission system called a karez in the Uygur language, or kan er jing in Mandarin, has provided sustainable water supplies in some communities of the Xinjiang Uygur Autonomous Region (Xinjiang), China for over 2,000 years. These water systems have also been used in countries in North Africa and West Asia, as well as other Asian countries, including Afghanistan, Iran, and Pakistan.

The Necessity of Karez Water Systems in Balochistan
Daanish Mustafa
Land is infinite in Balochistan. It is the one place in South Asia where if you ask someone how much land they have, they will generally have no idea. Instead, it is water that matters. In Balochistan, social station is not determined by landholdings but by the size of one’s share of water in a karez. These manmade underground channels passively tap groundwater and provide the lifeblood of villages at the valley floor.

The International Center on Qanats and Historic Hydraulic Systems (ISQHS) is a UNESCO water related center headquartered in Yazd, Iran.

ISQHS is focused on research, training, technology transfer, scientific collaboration, publications, and technical cooperation. Its main mission is "...recognition, transfer of knowledge and experiences, promotion of information and capacities with regard to all the aspects of Qanat technology and other historic hydraulic structures to fulfill sustainable development of water resources and the public welfare within the communities whose existence depend on the rational exploitation of the resources and preservation of such historical structures." 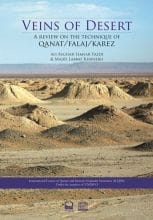 Translated from the French by Dorothée Vandamme

Khettaras are a historical, artistic and cultural testimony of how man faces climatic aridity while respecting natural resources. Also known as qanat, foggara or karez, they are water catchment tunnels which function through the phenomena of capillarity, filtration and condensation. Illustrating how we can tackle the global water issue, they are a symbol of how mastering traditional knowledge can be useful to develop new sustainable strategies for human progress. They hold a particular importance for water supply in extremely arid zones, for their capacity to supply drinking water and irrigation to arid and semiarid areas.

The Living Ecomuseum of Khettaras, in the Tafilalet region, Morocco, is located in a region with one of the highest concentration of khettaras in the world. The aim of this ecomuseum is to preserve and highlight this heritage. The Tafilalet Oasis’ Sustainable Territorial Development Program (POT) develops the project, which is implemented by the Direction of Territorial Planning and the UNDP, among others. The underlying concept behind building the museum is to present khettaras as a symbol of appropriate use of resources and of the relationship between cultural heritage and sustainable development. This territorial project has a double effect: first, its diffuse nature leads to a territorial dynamic, as the global coherence of the museum integrates components of oasis ecosystems. Second, the conceptual approaches reflect the POT’s action for integrated sustainable development.

Museum’s guests will undertake a journey of learning through travel and discovery of the different types of catchment tunnels, water-management systems and oases, with the help of information and documentation screens, and encounters with the local population, art, folklore, music and traditions. Different areas are organized for leisure activities, hospitality and reception in certified family-managed structures and hotels. Local authorities, the Jamâa, associations and artisans will also be involved in managing and organizing the museum. All the information concerning the ecomuseum and touristic information will be available online with Google Earth geo-references points, and via Wi-Fi throughout the online visitors’ itinerary.

The museum hub is located in Fezna. The junction of different landscape areas enables to understand and experience the ecology of the desert: the desert area in the south-east; the palm grove area in the east with a nomad settlement area and water phyto-treatment, a 950-meters-high mountain area (about 3,116ft) in the south, offering a panoramic view of the museum, the desert and the khettaras, and a desert ecosystem testing area (5).

Shaped like a ksar, the museum planimetry is a reminder of the local architectural style, built with thick mud brick walls and angle turrets. The general outline is composed of geometric modules placed along the water gravitation route, which comes down from the cave-hill in the north-west and goes to the oasis garden in the southeast. The museum is built around a courtyard, and the premises are closed to the outside.

The itinerary across the three sectors ― garden, services and offices, and museum ― follows the water flow. A fourth sector, fully integrated to the natural environment, is composed of the cave underground area and the panoramic rocky patio. Each of the four rooms in the museum has a theme: “The Khettaras life cycle: construction, functioning, restoration”; “Khettara, the hydraulic system of the Tafilalet region, and collective water management in Oases and the Tafilalet Desert”; “The Ecomuseum of Khettaras: a water- and energy-integrated management model in the Tafilalet region”; “The Majhoul route and the Ecomuseum of Khettaras’ satellite sites”.

For additional information on the Ecomuseum of the Khettaram see IPOGEA Traditional Knowledge Research Center.

Abdunah, Fawzi and Saad Twaissi. “Innovation or Technology Immigration? The Qanat Systems in the Regions of Udhruh and Ma'an in Southern Jordan,” Bulletin of the American Schools of Oriental Research, Issue 360 (November 2010), pp. 67-87.