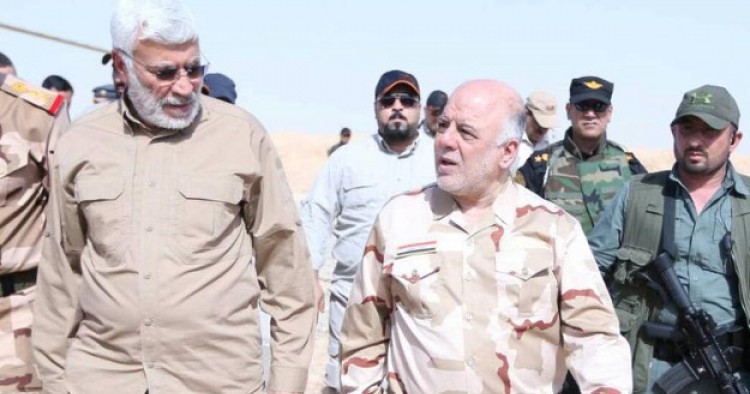 Mahdi al-Muhandis, the operational commander of the Iraqi Popular Mobilization Forces (P.M.F.), wrote in a personal letter to Nasrallah that the paramilitary forces are in a “united front” with Hezbollah against terrorism and Israel, according to reports in the Iranian media. “You’re the leader of the resistance and resistance has no meaning without you. We learned from you how to move forward in the path of resistance. And we learned from Hezbollah martyrs how to embrace land at the cost of blood,” said Muhandis, who has close relations with Iran. “Three decades ago, Hezbollah was a spark. Today it has turned into a freedom project and your men are torches of liberty,” he added. “The nation of resistance and your followers and devotees will continue your path and approach. And this path has no limits or boundaries.”

Qais al-Khazali, the secretary-general of Asaib Ahl al-Haq, another Iranian-linked group within the P.M.F. said all criticism leveled against Hezbollah was politically motivated and claimed the deal did not jeopardize Iraq’s security. “It is possible that this agreement has ignored Iraq’s political and social complexities… but it cannot be argued that this will have security and military implications for Iraq because the 300 Daesh [Islamic State] members do not change the balance of power and military equations,” Khazali told a gathering of worshippers for Eid prayers. According to Iran’s Fars News Agency, the Iraqi Hezbollah also defended Nasrallah.

Separately, Nouri al-Maliki, the head of Iraq’s Islamic Dawa Party, echoed similar sentiments. He claimed that the transfer of the militants to Syria’s Deir Ezzor Province was part of the overall counterterrorism strategy. The former Iraqi prime minister also accused Abadi of hypocrisy, alleging that the Baghdad government recently secured the liberation of Tal Afar through a deal with the Islamic State. “We are in a united front fighting against terrorism,” Maliki said in defense of Hezbollah and its allies.

Comment: On Monday, Hezbollah and the Lebanese Armed Force began to transport hundreds of Islamic State fighters and their family members in air-conditioned buses to eastern Syria. The transfer was part of a deal between the Islamic state and Hezbollah and the Syrian government.

While the Syrian regime and its foreign allies have made similar deals with terrorist and opposition groups on several occasions in the past, it was the first time that such a deal was highly publicized. The fact that the Islamic State militants were transferred near the Iraqi border also raised concerns in Baghdad in Erbil.  "Honestly speaking, we are unhappy and consider it incorrect," Abadi told reporters Tuesday. "Transferring terrorists from Qalamoun (an area on the Lebanese-Syrian border) to the Iraqi-Syrian border is worrying and an insult to the (Iraqi) people," he added.

The reactions to the deal yet again highlighted divisions among Iraqi politicians and military leaders. While the Abadi government sees the deal as a threat to the Iraqi security, Iranian-backed militia groups and politicians defend Hezbollah and see the deal as benefiting the broader objectives of the Iranian-led regional alliance.

The arrangement also angered the U.S.-led coalition fighting the Islamic State in Iraq and the broader region. According to latest reports, the Islamic State convoy is still stranded in the middle of Syria because the coalition conducted airstrikes prevented them from advancing in Deir Ezzor toward the Iraqi border.