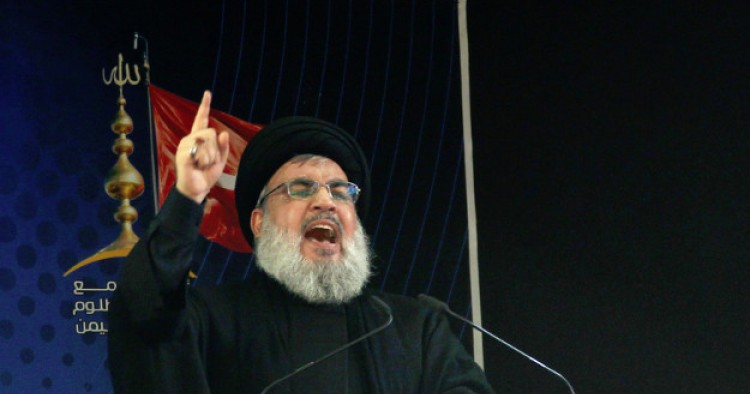 Lebanese Hezbollah’s Leader Hassan Nasrallah has declared victory in the Syrian war, Iranian and Lebanese media reported today. According to Lebanon’s al-Akhbar daily, Nasrallah said at a religious gathering in Lebanon that Hezbollah and its allies have won the war in Syria and what remains are only scattered battles. “Our martyrs, wounded and prisoners are changing equations and writing the history of the entire region, not just Lebanon’s,” he was quoted as saying. Nasrallah also claimed that the latest American-Israeli-Qatari-Saudi project aimed at defeating the “resistance front” in Syria and Iraq has failed and that Hezbollah and its allies are victorious.

Nasrallah also recalled his meeting with Iran’s Supreme Leader Ali Khamenei at the outset of the Syrian civil war six years ago. He said he told Khamenei that “if we don’t fight in Damascus, we will have to fight in Hermel, Baalbek, Dahieh, Ghazieh, western Bekaa Valey, and southern Lebanon.” Khamenei had reportedly agreed and added that the fight would also reach the Iranian soil.

Comment: Over the last three decades, Hezbollah – a predominantly Shi’ite group and a US-designated terrorist organization – has emerged from obscurity and become the most powerful group in Lebanon. With Iranian financial and military assistance, Hezbollah now dominates Lebanese politics, maintains a militia force stronger than the Lebanese Armed Forces, runs an extensive social welfare program, and functions as a state within a state. Hezbollah’s intervention in Syria was its first major role in a foreign conflict, as the group had historically mainly fought against Israel. According to Ali Alfoneh, a non-resident scholar at the Atlantic Council who tracks Shiite militia casualties in Iran and Syria, Hezbollah has lost more than 1,100 combatants in the Syrian war since October, 2012.

In the past six years, Iran and Hezbollah have played a vital role in propping up the embattled regime of Bashar al-Assad. It was also Iranian Quds Force Commander Qassem Soleimani, who during his July 2015 trip to Moscow convinced the Kremlin to militarily intervene in Syria to save Assad – a development that rapidly changed the balance of power in Assad's favor and resulted in immense human suffering. Hezbollah, on the other hand, has deployed thousands of its forces to Syria and helped train Iranian-led militia forces to fight alongside the Assad Army. Without the Russian air power and tens of thousands of militiamen recruited, trained and funded by Iran and Hezbollah, the Assad regime would not have survived.

The news about Nasrallah’s victory speech comes as the Russian Defense Ministry announced today that the Syrian Army and its allies have recaptured about 85 percent of the country’s territory from the control of insurgents and terrorists. The Russian defense minister also today met with Assad in Damascus to discuss joint military efforts and the future of bilateral defense ties between the two countries.