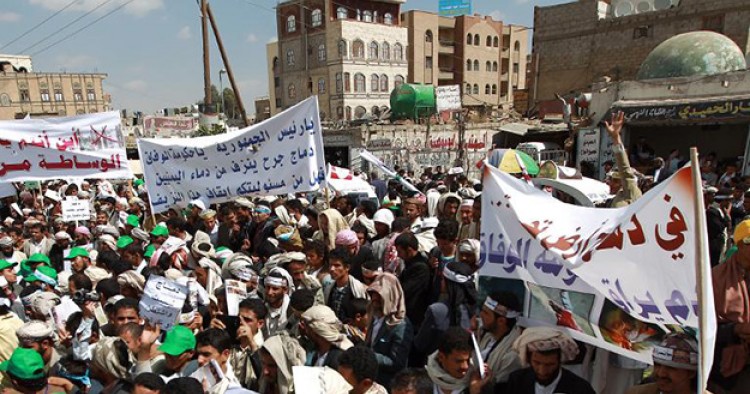 The removal of Yemeni President Ali Abdullah Saleh in 2011 has created an existential crisis for Yemen’s Houthis. Like many other armed political groups in Yemen and elsewhere, the Houthis’ survival depends on the continued existence of an enemy. With Saleh gone, their raison d’être has become difficult to define and their armed opposition hard to defend.

Given this paradox, the Houthis have been playing a contradictory game recently. Though this group, associated with both Zaydi and Twelver Shi`ism, has been participating in Yemen’s National Dialogue Conference, it has at the same time continued to wage battles against Salafis and other tribes in the north of the country. Though the Houthis recently signed a ceasefire deal with Salafis in the northern Yemeni town of Dammaj, battles remain on other fronts. This continuation of violence has as of late led to a decrease in the Houthis’ legitimacy among their supporters.

Beginning in the 1970s, Saudi Arabia, with an eye to increasing its influence in Yemen’s northern governorate of Sada, began to fund a Salafi Wahhabi group there to convert Shi`i Zaydi locals to Wahhabism. By the 1990s, the Salafis had become powerful in the area, which made then President Saleh fearful of their increasing influence. Saleh used the familiar strategy of playing factions off against each other in order to temper this influence. He countered the Salafis by supporting the Houthis, letting the group’s leader, Hussein al-Houthi, run for parliament under Saleh’s ruling party.

Saleh eventually regretted his encouragement of the Houthis, particularly after Hussein al-Houthi turned against him, and armed conflict broke out between the Yemeni government and the Houthis in Sada in 2004. In September of that year, Yemeni government forces killed Hussein al-Houthi. The violence escalated in 2009, when, in response to Houthi cross-border attacks and territory grabs, Saudi Arabia retaliated with its own attacks and air raids. Saudi Arabia ended its direct military involvement in the conflict in January 2010, after the Houthis ceded Saudi Arabian territory they had previously captured. Although Saudi Arabia framed this outcome as a military triumph for the Kingdom, it suffered significant casualties.

The violence has continued since then, mainly between Houthis and Salafis in the north of Yemen. In the last few months, the two have engaged in heavy battles that have led to tens of deaths and injuries on both sides. The ceasefire in the town of Dammaj went into effect on January 11, but peace is not assured. Indeed, countless truces have been broken over the past decade by all parties involved in the fighting. As for the relationship between the Houthis and the Yemeni government, it is a fraught one whose tensions are clear as Yemen undergoes a transitional process aimed at bringing a new constitution and new leadership to the country after the removal of Saleh.

The Houthis and the 2011 Uprising

When Yemen’s uprising started in 2011, supporters of the Houthis joined the masses in the streets against Saleh, receiving a warm welcome from much of the Yemeni public for relinquishing their weapons and choosing to wage a peaceful struggle.

However, the Houthis then publicly rejected the Gulf initiative that removed Saleh from power even though it achieved their goal of ousting the president. They described the initiative as a conspiracy by Saudi Arabia and the United States—the initiative’s supporters—to hijack Yemen’s revolution. Because many of Yemen’s elites kept their powerful roles under the terms of the initiative, the Houthis felt that more change was needed and that all should step down in order for Yemen to forge a new path. After Saleh’s vice president, Abdu Rabbu Mansour Hadi, was brought to power, the Houthis continued to protest, though other political groups had withdrawn their members from demonstrations.

But by 2013, the Houthis were participating actively in the National Dialogue Conference (NDC), a still-ongoing dialogue consisting of a cross-section of Yemen’s population that aims to set the country on a fresh course through a new constitution and elections. The NDC is part of the Gulf initiative and is funded and supported by the U.S. government. The Houthis thus appeared to concede to the terms of the initiative and to the Hadi power transfer that they had once condemned.

Yet the Houthis have in actuality walked a contradictory path through Yemen’s current political scene—one that includes participating in the NDC while at the same time publicly condemning the transitional government and the international community’s role in the country, as well as waging battles in the north.

The Houthis’ recent activities demonstrate this split identity. While the Houthis have 35 delegates in the NDC, they have been not only launching battles in Sada, but also expanding into different provinces around Sada, fighting with tribes allied to the Islah Party, Yemen’s most influential Islamist party, and with Salafi groups. The Houthis are also creating new political alliances with Yemenis from Sunni backgrounds, including leftists, separatists from the southern movement, and other non-religious groups and leaders. The Houthis claim that these new alliances are an attempt to broaden their coalition, but critics see them as a way to disguise the group’s sectarian motives.

The Houthis became popular with the Yemeni public over the course of 2013, though their popularity was not due to their ideology. Rather, the Houthis’ influence grew because of a power vacuum. This was the result of the fact that their political enemies, particularly Islah, have lost popularity outside of their support base, and because the transitional government has failed to meaningfully respond to the people’s needs. The Islah Party has especially lost favor among the general public due to the perception of it as greedy and manipulative. The Houthis were also attractive to the public because of their contradictory path and ambiguous identity; their lack of a clear statement of purpose or ideology allowed them a certain nebulous appeal. However, their continued use of violence has shown them to simply be an armed group.

It remains to be seen how successful the Houthis will be in using their paradoxical strategy. Now that Saleh is no longer in power, the Houthis’ proximate objective has been accomplished, and they must redefine their goals. Thus far, it appears that their strategy is as ill-defined as their objectives.