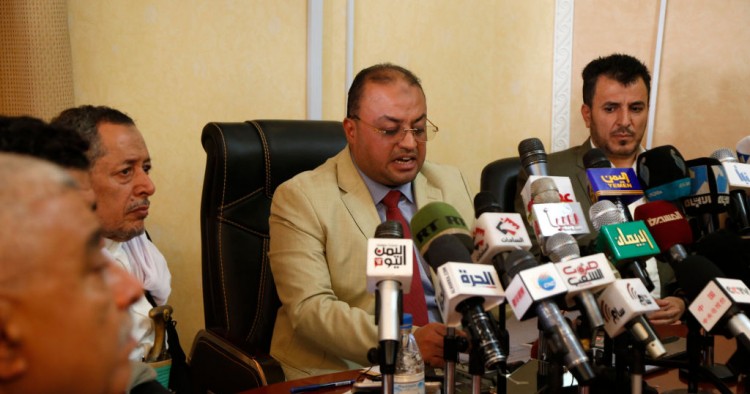 “Yemen has no cases of coronavirus, but we will hold the United Arab Emirates responsible if any infection appears in the country,” said Dr. Taha al-Mutwakel, the Houthi-appointed minister of public health and population, in a press conference at the beginning of March. Al-Mutwakel did not elaborate on his reasoning, but it’s part of a pattern of using any crisis that affects Yemen as an opportunity to attack his adversaries and deflect attention from the militia’s wrongdoing.

The pandemic, which has yet to be documented in Yemen, is a gift for the Houthis. They are always looking for opportunities to emphasize their narrative linking the Saudi-led intervention in Yemen with the country’s humanitarian crisis and absolve themselves of responsibility. The Houthis — who are aligned with Iran and fighting Yemen’s internationally recognized government and its Saudi backers — have underplayed the effects of the coronavirus among their allies and overplayed its consequences everywhere else.

The Houthi-operated Al Masirah satellite TV channel’s coverage of the COVID-19 pandemic provides an excellent example of this politicization of information, especially when it comes to Iran. There is no mention at all of how the coronavirus has spread there, or how the health sector has coped, but there is plenty of coverage of another story, about how Iran is attacking U.S. bases in Iraq. Al Masirah’s website features extensive coverage of Iranian political affairs and quotes its leadership frequently. A quick search on the website reveals that it has detailed reporting of coronavirus statistics for the UAE, Saudi Arabia, Italy, China, South Korea, Taiwan, Japan, and the Netherlands, among other countries, but somehow fails to specify the number of cases in Iran.

The Houthis’ media blackout on the effects of the coronavirus in Iran is meant to hide the failures of the Islamic Republic in handling the crisis, the severity of which it seriously underestimated. Yemen’s official state news agency, Saba News, which the Houthis now control, covered the spread of the virus in Iran by highlighting statements from the Iranian foreign minister protesting the sanctions imposed by the U.S. on his country. Other coverage painted Iran in a positive light, demonstrating how the Islamic Republic is effectively combating the virus despite the American “maximum pressure” campaign, even going so far as to claim that Iran is developing a cure.

The Houthis are keen to maintain the Islamic Republic’s image as a powerful country capable of confronting the most formidable challenges, and this is the reason for their efforts to obfuscate how Tehran is handling the pandemic. They do not want to draw attention to the alarming rate of infections in Iran, given their close military, religious, diplomatic, and trade ties with the Islamic Republic. The Houthis have an embassy in Tehran headed by Ibrahim al-Dailami and other staff who frequently travel to Yemen. Senior members of the Houthi militias meet regularly and publicly with the Iranian leadership and with military commanders from the Islamic Revolutionary Guards Corps, such as Reza Shahlai. In addition, many Yemenis in Houthi areas receive full and partial scholarships to study in Qom, one of the cities that was most affected by the coronavirus.

Unfortunately, instead of taking precautions to limit exposure, the Houthi leadership is focused on stepping up their rhetorical attacks against Saudi Arabia and the U.S. Mohammed al-Houthi, the second-most-prominent leader of the Houthi militia, described the Saudis’ decision to suspend prayers at the Grand Mosque in Mecca, part of the country’s efforts to impose a quarantine to protect travelers and residents, as one of the “greatest sins.” Al-Houthi took to Twitter, posting that the quarantine is a ploy by the Saudis, who are becoming more secular and want to stop Muslims from having an emotional attachment to the House of Allah. Al-Houthi also pre-emptively announced that any spread of the epidemic is the result of “Saudi-led aggression,” criticizing Riyadh for permitting flights from Jordan and Egypt to Yemen.

Moreover, al-Houthi has also promoted the Iranian regime’s conspiracy theory that the virus is an American plot and criticized the World Health Organization’s (WHO) statistics for the Middle East because the number of COVID-19 cases for Iran was higher than what the Houthis reported. Al-Houthi said that the WHO should not have published the figures without “verifying the accuracy of the information they gathered.”

Maintaining a consistent strategy of pre-emptively blaming the Saudi-led coalition for any coronavirus cases in Yemen, militia spokesperson Mohammed Abdul Salam stated recently that all major tragedies in the country are a result of the Saudi-led intervention, adding that the blockade and prevention of food and medicine deliveries are responsible for the spread of famine, cholera, and other epidemics. To be clear, the Saudi-backed coalition and the Government of Yemen have been reckless, jeopardizing the country's health infrastructure with aerial attacks and failing to provide services in government-held areas, but they are not solely to blame for everything. In his recent statement to the UN Security Council, Mark Lowcock, the UN under-secretary-general for humanitarian affairs and emergency relief coordinator, emphasized that the Houthis are a major contributor to Yemen’s humanitarian crisis and have obstructed aid delivery in the areas under their control.

However, if there is a silver lining to this ordeal, it is that the meticulous cover-up of Iran’s mishaps suggests an awareness of the policy failures that the Houthis must themselves avoid. That the disease has spread like wildfire among the upper echelons of the Iranian regime is likely a concern that looms large in the minds of the Houthi leadership, who stand to be more affected than the average citizen given their close ties and regular contact with Iranian officials. The Houthis have recently announced several measures to deal with the pandemic, establishing a hotline to report cases and symptoms, training medical teams in districts under their control, opening medical quarantine units, and introducing testing for suspected cases. They have also closed Sanaa International Airport — which is almost exclusively used by UN staff — to incoming flights for the next two weeks, and announced a quarantine for those entering the country by land.

While these measures are better than nothing, implementation has come up short. Many residents in areas under their control have no faith in the Houthi establishment. The Houthis have failed to deal with several previous pandemics over the past five years and even exploited the situation by blocking aid and vaccines from reaching their intended recipients. Some residents are reluctant to visit hospitals for fear of arrest. Travelers have been stranded at checkpoints and barred from entry, as Houthi authorities told them that they were under quarantine. According to eyewitness testimony posted online, at one border checkpoint there were no medical staff to conduct tests and those who paid a bribe were given a free pass.

Unfortunately there is no scenario in which a country like Yemen — with limited resources, poor infrastructure, and severe water shortages — is capable of escaping this pandemic. But pre-emptively blaming adversaries is not going to stop the virus. The Houthis need to dedicate all of their resources to fighting this threat, which will undoubtedly reach Yemen. Given the Houthis’ lack of leadership and propensity to support conspiracy theories, the WHO must enforce its recommendations now to help them combat this global pandemic. The exploitation of COVID-19 for political purposes must end immediately, along with the Houthis’ military expansion, or Yemen and the region will find themselves in a crisis that they cannot contain.