How Iran might respond to a US military offensive 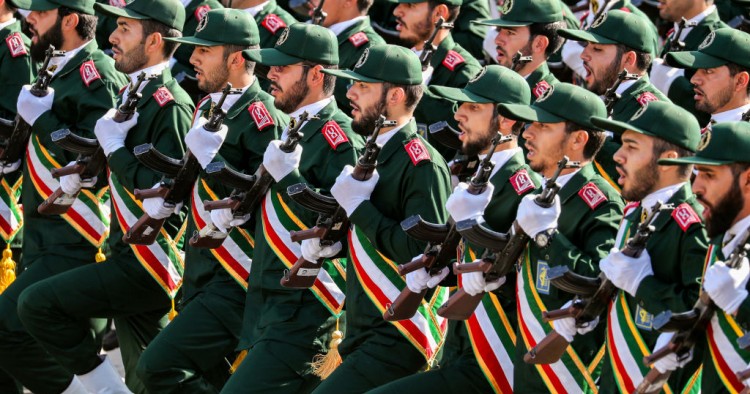 Having earlier threatened Iran with “obliteration” in the event of war, U.S. President Donald Trump warned on July 2 that the Islamic Republic was “playing with fire” after it breached the 300-kg cap on the stockpile of low-enriched uranium set by the nuclear deal — officially known as the Joint Comprehensive Plan of Action (JCPOA). Tehran vowed in early May that it would gradually reduce its compliance, including enriching uranium to a higher degree than the JCPOA-stipulated 3.67 percent limit, if world powers did not move within 60 days to shield its interests against the Trump administration’s “maximum pressure” campaign. The 60-day deadline expires on July 7.

With tensions between the two adversaries soaring, Trump floated the idea of a short war with no “boots on the ground” in a Fox News interview, which Iranian Foreign Minister Mohammad Javad Zarif immediately dismissed as an “illusion.” “Whoever begins war will not be the one ending it,” he tweeted, reiterating Iran’s aversion to negotiations under duress and stressing that sanctions are not an “alternative” to war but war itself.

Yet, despite reportedly engaging in suspected “sabotage attacks” on a number of oil tankers in the Gulf of Oman — presumably as a form of asymmetric retaliation against crippling economic pressure — Iran is very unlikely to initiate a direct conflict with the United States, but the scale and scope of its response to potential U.S. military action is not entirely clear. Will it resort to overwhelming strategic force in the hope of dissuading the “aggressor” from further escalation, thus risking a major confrontation, or respond surgically to potential U.S. “tactical” strikes?

“A detailed and specific answer to this question would disclose our defense capabilities and retaliation strategy,” Alireza Akbari, a former Iranian deputy defense minister, told MEI. “Transparency can undermine deterrence.”

On June 20, President Trump retracted his earlier decision to launch a military attack against Iran in retaliation for the Islamic Revolutionary Guards Corps (IRGC) downing a high-tech American drone, which it claimed had violated Iranian airspace.

“Iran will not remain content with a limited response,” according to an IRGC-affiliated intelligence analyst based in Tehran.

“In the drone incident, which was just a territorial transgression rather than military aggression, we downed the unmanned vehicle and announced that we could have even shot down a U.S. Navy P-8 aircraft with a crew of 35 flying nearby too,” the source told MEI. “This means in case of military aggression, Iran will respond harshly, which could very well include targeting all American bases and vessels in the neighborhood.”

Iranian military officials and IRGC commanders have repeatedly asserted that Iran will not surrender to external pressure even if it is bombed, and any “adventurism” on the part of the U.S. and its allies will be met with a “hard, crushing, and obliterating response.” However, while the threat of deploying overwhelming force in retaliation might serve as a deterrent against military action in the first place, fears of a small-scale conflict escalating into all-out war could keep Iran’s potential response in check.

“The Islamic Republic has not yet forgotten Operation Iraqi Freedom in March 2003, which ended Saddam Hussein’s rule in only 19 days,” Saeid Golkar, senior fellow on Iran at the Chicago Council on Global Affairs, told MEI. “If military conflict erupts, Tehran will likely avoid escalating and expanding the confrontation out of fears for regime survival, but it will undoubtedly tap into proxy warfare with a good degree of plausible deniability.”

Since the U.S. designation of the IRGC as a foreign terrorist organization and the Department of Treasury decision to halt sanctions waivers for buyers of Iranian oil in late April — in an attempt to bring Iran’s oil exports down to “zero” — a number of suspicious rocket attacks have taken place near American bases and headquarters of Western oil firms in Iraq. These attacks, which have not resulted in any casualties so far, indicate that Iran-backed non-state actors in the region, such as parts of the Iraqi Popular Mobilization Forces (PMF, or al-Hashd al-Shaabi) and Lebanese Hezbollah, will open their own fronts against commonly perceived hostile targets and systematically assist Iran’s war effort.

“It is wrong to regard Iraqi Hashd [as] a homogeneous group in terms of their objectives and allegiances,” Mustafa Habib, Iraqi security analyst and visiting fellow at the European Council on Foreign Relations, told MEI. “There are three subgroups, including those loyal to Iran such as Kata’ib Hezbollah, Asa’ib Ahl al-Haq, and Harakat al-Nujaba, the faction close to Ayatollah Ali al-Sistani, and those affiliated with Muqtada al-Sadr.”

“While the latter two will remain neutral, pro-Iran paramilitary forces are expected to get involved in fighting, perhaps by threatening U.S. military bases in Iraq, especially the Ain Asad airbase in the Anbar Province,” Habib added.

“All facts indicate that Hashd units ideologically associated with Iran will attack American forces inside Iraq and might even extend their operations beyond the borders to target U.S. allies in the region, but the majority of [the] Iraqi military wouldn’t want to drag Iraq into a confrontation between Iran and the United States,” he told MEI.

American officials recently concluded that drone attacks against a major Saudi oil pipeline on May 14 — which Iran-backed Houthi rebels in Yemen claimed — in fact originated from Iraq. Meanwhile, the Houthis have intensified their military campaign against positions within Saudi territory in recent months, to include repeated drone and missile assaults on the Abha Airport, around 180 km from the Saudi-Yemen border. These and similar developments have lent credence to the perception that Tehran is trying to indirectly punish those regional allies of the U.S. that are playing a significant role in the “maximum pressure” campaign against Iran, a source of leverage that could be systematically utilized in the event of war.

“As any military action by the U.S. might possibly involve using the territories of at least one of its regional allies, Iran would consider directly targeting those states’ interests,” Hamidreza Azizi, professor of international relations at Shahid Beheshti University in Tehran, told MEI. “In this case, countries such as the UAE and Bahrain — given their geographical proximity to Iran and close cooperation with the U.S. — would be the first affected at the same time as Iran-allied non-state groups throughout the region would ‘indirectly’ target their interests and positions.”

Another theater of retaliatory operations might be Syria, where Iranian proxies from Pakistani and Afghan Shi’a fighters to Hezbollah forces have established an extensive presence in the course of the eight-year Syrian civil war to prop up the Assad government against anti-regime insurgents. On July 1, Israeli warplanes operating from Lebanese airspace launched missile strikes against multiple targets on the outskirts of Damascus and Homs, reportedly killing 16, including 10 Iran-backed militia fighters and Hezbollah members, according to the Syrian Observatory for Human Rights. The move was meant to disrupt Iranian arms supplies for the Lebanese group.

“In Syria, Iran has so far exercised an interesting level of restraint both toward the American moves in eastern parts and frequent Israeli attacks against Iranian targets, with the major reasons behind it being the interests and considerations of Russia and Turkey, Iran’s main partners in the Astana framework,” Azizi explained. “However, this trend can easily change in the event of military confrontation with the U.S. Iran would most probably activate the groups under its control to take on American forces and Israeli positions across the border.”

“Overall, a total escalation is expected to happen in Syria in case of a U.S.-Iran conflict,” Azizi added.

Two days after Israeli airstrikes against multiple Iranian and Hezbollah targets in Homs and Damascus, Israeli Foreign Minister Yisrael Katz told an international security conference in Herzliya that Israel is bracing for involvement in a possible confrontation between the Islamic Republic and the United States if “a shift from the ‘gray zone’ to the ‘red zone’” occurs as a result of Iranian miscalculations. A day earlier, on July 1, Mojtaba Zolnour, a hardline lawmaker in Iran’s parliament and new chairman of its National Security and Foreign Policy Committee, had threatened that should the U.S. attack the Islamic Republic, Israel would be destroyed in “only half an hour.”

“Israel would rather not take part in any military confrontation between Iran and the U.S., but because of probable Iranian attacks against Israeli interests, it is expected to join the conflict and target Iranian infrastructure across Syria and Iraq in order to minimize Iran’s ability to launch missiles and drones against Israel,” Yossi Mansharof, research fellow at Haifa University’s Ezri Center for Iran and Persian Gulf Studies, told MEI.

If an Iranian-American clash in the Gulf spills over into the Levant and affectsIsrael, Hezbollah will likely find itself at the forefront of a new war with Israel, which has the potential to extend far beyond the Middle East and play out across Europe and even the United States.

“Hezbollah would attack Israel from the Syrian territory, the Red Sea, and might even harm Israeli interests across Europe,” Mansharof explained. “Hezbollah's 910 unit, which coordinates its external operations, is even capable of targeting various facilities in the United States, thanks to its seeming recruitment of operatives there over the past years.”

“But this will only come to pass if Iranian Supreme Leader Khamenei and IRGC leadership find it appropriate.”

Maysam Behravesh (@MaysamBehravesh) is a senior political analyst at Persis Media and a PhD candidate in the Department of Political Science at Lund University, Sweden. The views expressed in this article are his own.