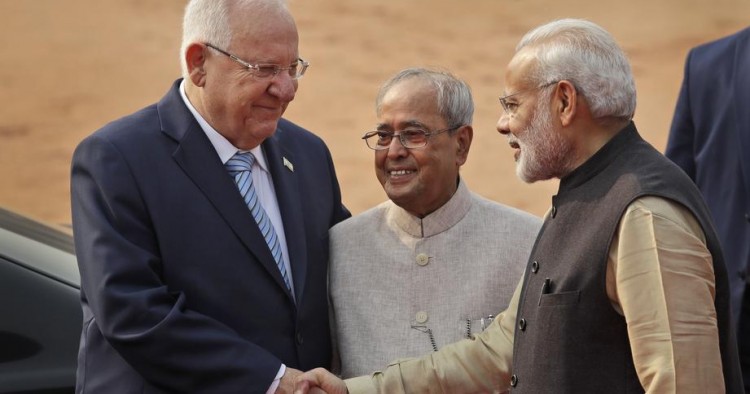 India's interests and capabilities extend well beyond the subcontinent. This essay is part of a series that explores the geopolitical dimensions, economic ties, transnational networks, and other aspects of India's links with the Middle East (West Asia) -- a region that plays a vital role in India's economy and its future. More ...

January 2017 marked the 25th anniversary of diplomatic ties between India and Israel. India recognized Israel in September 1950 but deferred the establishment of full diplomatic relations until January 1992.[1] For the last two decades, trade and economic relations have taken an upward swing. While both governments prefer to publicly emphasize cooperation in the fields of agriculture and information technology, defense ties, especially arms sales, have been a major component of this flourishing partnership. India has become Israel’s largest arms export market in the world over the last decade (replacing China); and Israel became one of India’s largest arms supplier.[2]

Why did India develop a strong military partnership with a country it had ignored for 42 years? What can explain the development of defense ties in spite of limited political leadership involvement over the past decade? Finally, what are the prospects for defense relations as India grows to become one of the world’s largest defense importer.[3] This essay answers these questions by providing an account of the evolution of Indo-Israeli defense cooperation over the past 25 years.

The Indian military had always admired the experience and expertise of the Israeli army in its different successful military campaigns and had already lobbied for more cooperation with its Israeli counterpart.[4] The study of some of the 1967 Israeli military operations had for instance been made compulsory for officers of the Indian army.[5] In January 1963, three months after the border conflict with China, the Israeli Chief of Army Staff and the Chief of Military Intelligence were welcomed to New Delhi for an exchange of views with some of India's military top brass, including the Chief of Army Staff.[6] There were other instances of Israeli military assistance during the conflicts of 1962, 1965, and 1971. In times of strategic need and of international arms embargo, the Israeli provision of mortars and ammunition was essential.[7]

However, this professional appreciation of Israel’s military and experience was never translated into actual cooperation primarily because the two countries did not have diplomatic relations and the Indian military has little say in the making of India’s foreign policy. However, there was an urgent need to diversify India’s military procurements given India’s dependence on Soviet equipment,[8] the increasing obsolescence of Soviet acquisitions, and the failure of the indigenous military industry to deliver the equipment expected by India’s armed forces.[9] The change in arms procurement strategy became even more pressing following the collapse of the U.S.S.R. and the division of the Soviet military industry in 15 different states. As a consequence, the Narasimha Rao government openly acknowledged that it had taken the defense procurement factor into consideration when justifying the establishment of diplomatic relations with Israel in January 1992.[10]

Prudent Rapprochement in the 1990s

Despite the establishment of diplomatic relations, India still hesitated to buy weapons from Israel until the late 1990s as there was remaining internal political opposition. Furthermore, the lack of contacts and of knowledge of the structure of both defense industries meant there would be an initial stage of discussion to identify the potential areas of cooperation. Because of perceived domestic and regional opposition, most subsequent defense exchanges and visits were not disclosed until they had happened, and no details of the discussions were revealed. In addition, most visits were either followed or preceded by a compensating visit to another Arab capital.[11] Due to internal reluctance, it also took five years of lobbying from the Indian military establishment to convince the MEA and political class for the need to have a defense attaché permanently based in Tel Aviv.[12]

Some members of the Indian Congress Party (I.N.C.) believed that developing defense ties with Israel would prejudice the I.N.C.'s electoral prospects at home by alienating the domestic Muslim population.[13] Another decisive actor involved in the defense procurement process also opposed discussions with Israel’s defense industries. The state-controlled Defense Research and Development Organization (DRDO), which was in charge of most of India’s national defense projects, had institutional interests in limiting increased purchases and cooperation with the Israeli military industry. The DRDO was in fact in competition with Israeli companies such as Israeli Aerospace Industries (IAI) and Rafael over projects like the upgrade of MIG's, the development of various missile systems, satellite technology, and even the production of UAVs.[14]

In addition, there were international obstacles to technology transfer. The international arms control guidelines like the Missile Technology Control Regime (M.C.T.R.)[15] — which India did not join until June 2016 — originally prevented India from cooperating with Israel on ballistic missile technology. Some of the Israeli technology was also co-produced with the US any technological transfer required prior approval from Washington to enter in negotiations with third.[16] Nevertheless, there were many visits from the lower echelons of the Defense Ministries as well as from representatives from the Israel defense industry. The first purchases of UAVs in the mid-1990s seemed also to indicate possible cooperation in this particular field.

A combination of factors in the late 1990s led to the emergence of a defense partnership. There was first the rise to power of the Bharatiya Janata Party (B.J.P.) which had traditionally promoted better relations with Israel, even before the establishment of diplomatic relations.[17] After the nuclear tests of May 1998, India was also sanctioned by a military embargo. Unlike the United States and most Western countries, Israel did not condemn the test and resumed its defense exports to India. This increased Israel’s credibility as reliable arms supplier.

Nevertheless, it was the aftermath of the Kargil conflict led to a major change. In spite of the final diplomatic and military victory, the Kargil crisis led to an important debate over India’s defense and intelligence failures.[18] Pakistan’s phased infiltration in the forward outposts in elevated terrains revealed the Indian’s military unpreparedness in both spotting and preventing the incursions across the Line of Control, as well the lack of training and experience in mountain warfare. In its efforts to remedy these problems, and within an enabling context of defense reforms, the Indian security establishment turned towards Israeli assistance and technologies. Lessons from the Kargil conflict notably encouraged India to obtain surveillance equipment such as UAVs, cross-border sensors, and Airborne Early Warning (A.E.W.) Systems, three fields where Israel had a competitive edge in the international market.

In other high-technology niche areas such as missile defense where India had failed to build robust indigenous ...capabilities, Israel could offer important equipment and expertise, such as the Barak-I AMD systems India bought in 2001.[19] Israel also proved to be an indirect access U.S. defense technology (such as sub-elements of the Arrow system like the Green Pine Radar).[20] Israel equally provided qualitative upgrades to some of India’s ageing soviet equipment.[21] A new qualitative edge was attained with the $1.1 billion purchase of three Phalcon AEW systems which were finally delivered when the Congress Party was in power in 2009.[22] India approved the purchase of two additional Phalcons in 2016 in 2016.[23]

Over the past 15 years, Israeli defense industries have demonstrated their willingness to transfer technology and to engage with the Indian defense industry in joint ventures, production and Research and Development in high-technology military equipment. These opportunities have been framed as a way to develop India’s own indigenous defense production, especially under Prime Minister Narendra Modi’s “Make in India” initiative.[24] For instance, IAI has been cooperating with DRDO on the development of a medium Surface-to-Air Missiles system for the Indian Army.[25] This is a significant development since Israeli defense industries and the DRDO previously competed on similar projects.

The Future of Defense Ties: Beyond the Transactional Partnership?

Because military-technical cooperation with Israel has indirectly been framed as enabling India’s quest for self-sufficiency, it has been perceived positively by politicians across the spectrum as an instrument preserving India’s strategic autonomy (which has little meaning unless India develops its own indigenous defense production).[26] Furthermore, since most of Israel’s sophisticated weapons have been developed indigenously, there were fewer risks of external pressures on Israel to stop supplying India with military equipment, especially during military crises. For example, Israel did not interrupt its military supplies to India during the two Indo-Pakistani crises of 1999 and 2001-2002.

Because of the technical nature of this collaboration, most politicians have deferred to defense bureaucrats for the negotiations. The difficulties in reversing the new Israel policy have been directly observable since the return of the Congress Party to power in 2004. While expressing strong anti-Israeli rhetoric during the electoral campaign,[27] Congress has been more rhetorically prudent since it came to power. Congress has even declared it would not review its diplomatic relations with Israel which had now been framed as a “strategic imperative.”[28] In fact, bilateral defense relations were resumed and even dramatically increased under the Congress tenure. After it came to power in 2014, the B.J.P. government resumed defense deals that had been negotiated under the previous Congress governments, such as the acquisition of 262 Barak-I missiles for India’s Navy and the purchase of the Israeli Spike anti-tank guided missiles launchers and missiles over its U.S. competitor, the Javelin.[29]

It remains to be seen whether current Prime Minister Modi is willing and capable to elevate the transactional relationship to a more visible political and strategic partnership, especially as he is scheduled to be the first sitting Indian Prime Minister to visit Israel in June-July 2017. Until now, the solid buyer-seller relationship with Israel has benefited from being insulated from developments in India’s domestic politics as well as from its open and parallel political support to Palestinian authorities. In addition, the wide differences between Indian and Israeli worldviews, notably on Iran, and the absence of common enemies limit the immediate need for a stronger strategic rapprochement.

[2] Tanvi Madan, “Why India and Israel are bringing their relationship out from “under the carpet,”” Brookings Institution, February 11, 2016, accessed March 1, 2017, https://www.brookings.edu/blog/order-from-chaos/2016/02/11/why-india-and-israel-are-bringing-their-relationship-out-from-under-the-carpet/.

[5] See former Chief of Army Staff of the Indian Army General V. P. Malik’s statement on his visit to Israel in 1998 in Mahendra Ved, “Slow and Steady: Growing Security Ties with Israel,” Times of India, March 30, 1998.

[11] For instance, the Indian Army Chief of Staff, General V.P. Malik was sent to goodwill visits Syria and Egypt in 1998 after his very symbolical first visit to Tel Aviv in March 1998.

[15] For details concerning the MTCR, see the official website: http://mtcr.info/.

[16] The US had previously criticized and even blocked the Israeli transfer of Lavi, patriot missile, and Phalcon technologies to China. These precedents served as cautionary tales for further joint ventures between India and Israel. See Yitzhak Shichor, “Israel’s Military Transfers to China and Taiwan,” Survival 40:1 (1998): 68-91, http://www.tandfonline.com/doi/pdf/10.1093/survival/40.1.68.

[26] The need for greater defense industrial self-reliance was notably emphasized in Sunil Khilnani et al., Non-Alignment 2.0: A Foreign and Stratgic Policy For India in The Twenty-First Century (New Delhi: Centre For Policy Research, 2012) 62.