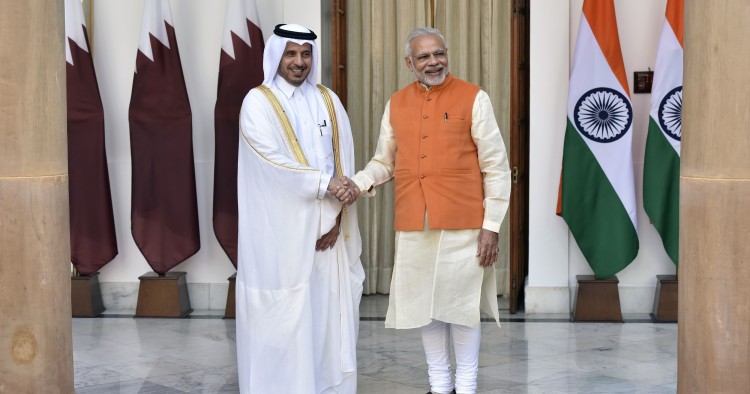 India’s interests and capabilities extend well beyond the subcontinent. This essay is part of a series that explores the geopolitical dimensions, economic ties, transnational networks, and other aspects of India's links with the Middle East (West Asia) -- a region that plays a vital role in India’s economy and its future. More ...

Examining India’s relations with Qatar provides a lens through which to illuminate Delhi’s goals and approach to West Asia at a time when the Gulf countries are mired in tensions and controversies.

During most of the 20th century, India’s relations with Qatar consisted primarily of a small but flourishing pearl import trade as well as the export of spices. Qatar’s fortunes dramatically improved with the discovery of the Dukhan onshore oil field in 1940 and the country’s first offshore field two decades later, followed by the steep rise of global oil prices. As Qatar’s economy surged, so too did the country’s expatriate labor force. By the 1990s, Qatar’s foreign-born workforce included more than half a million Indian migrants, accounting for nearly a third of its population.[1]

Over the years, the composition of India-Qatar trade has broadened, with India exporting cereals, machinery and electronic goods exported while importing oil, plastics and chemicals imported to India amounting to $17 billion. However, liquefied natural gas (LNG) is the most important element of the bilateral trade relationship. Qatar accounts for 80% of India’s LNG supplies.[2] This vital energy link underscores the importance of India’s economic ties with Qatar, despite that the total value of two-way trade is modest compared with the United Arab Emirates (UAE).[3]

Since 2014, the Modi administration has built on its predecessor’s efforts to improve ties with Qatar as a part of India’s “Look West” strategy. In this regard, Prime Minister Narendra Modi held high-profile summit meetings with his counterpart Emir Tamim bin Hamad Al Thani in 2015[4] and 2016.[5] These meetings proved fruitful for India, resulting in the halving of the per unit price of Qatari gas. Additionally, Qatar forgave the $2 billion debt owed by India for non-compliance with previously agreed volumes of gas shipments.[6]

India also worked hard to extend cooperation with Qatar beyond trade. Modi’s 2016 visit to Qatar culminated in the signing of a Memorandum of Understanding (MoU) aimed at cooperation in cyber security, defense, health, and energy.[7] Looking to attract Qatari sovereign wealth funds (SWF), Modi encouraged Shaykh Al Thani to invest in the development of India’s urban infrastructure. In exchange, Modi promised to facilitate the exchange of skilled labor to help Qatar achieve the stated objectives of the Qatar National Vision 2030, including expertise in ensuring the smooth workings of the 2022 FIFA World Cup.[8]

The possibility of conducting joint operations in battling terrorism also figured prominently in these diplomatic interactions. Counterterrorism cooperation is a priority for India, as over the years, the country has suffered multiple terrorist attacks. In some cases, the perpetrators of such attacks have bankrolled their activities through illegal money transfers from abroad. Accordingly, India and Qatar have declared their interest in working together to combat terrorist financing. Although it is unclear when or how such pledges might be fulfilled, there are no apparent fundamental disagreements between India and Qatar that might stand in the way. Their respective positions on the Muslim Brotherhood, for example, are compatible.[9]

Steering Through the Gulf Diplomatic Crisis

The eruption of the Qatar diplomatic crisis in June 2017 complicated India’s relations with the Arab Gulf states. The Indian government referred to the rift as an internal matter involving the Gulf Cooperation Council (GCC) countries.[10] Nevertheless, the Saudi-led bloc’s closure of sea, land and air borders appeared to pose two challenges for Delhi: 1) how to maintain trade relations with Qatar and 2) how to effect the evacuation from Qatar of the massive number of Indian migrant workers should the situation further deteriorate. An additional concern at the time was that Saudi Arabia and the UAE might turn the boycott of Qatar into a global issue, which, at least theoretically, could might have entailed their demanding that India suspend ties with Qatar indefinitely or risk retaliation.

Yet, the perceived ill effects of the feud never materialized. After Delhi initially placed a hold on exports shipments to Qatar, normal trade flows between the two countries resumed.[11] Indian expatriates residing in Qatar encountered few problems except for minor difficulties rebooking flights.[12] Furthermore, the fear of pressure being brought to bear on Indian workers elsewhere in the Gulf, or the nightmare scenario of their being expelled proved to be unfounded — fueled by little more than irresponsible media reporting. For one thing, were Indian expatriates to have been subjected to such pressure or threatened with retaliation en masse, the Indian Ministry of External Affairs undoubtedly would have intervened to mediate the crisis and avert such hardship (which would have imposed massive costs in India). For another, had the members of the Saudi-led bloc followed such a path, they would have incurred substantial economic costs of their own.

Furthermore, Saudi-led coalition members could not have replaced Qatari LNG with supplies, and thus were never positioned to leverage them in exchange for India’s strict compliance with the boycott. Even UAE, a key coalition member, did not halt gas imports from Qatar when the crisis broke out.[13] Here, it is worth underscoring Qatar’s importance as an LNG supplier to India, which is seeking to increase the share of cleaner energy resources in its primary fuel mix.[14]

The worst moments of the Qatar diplomatic crisis have long passed. Meanwhile, however, the political lines in the Middle East have been redrawn. The Gulf countries appear to have adapted to the impasse rather than to have found a formula to break it. The underlying conditions that precipitated the crisis have not fundamentally changed. The ongoing diplomatic feud has not significantly disrupted or damaged India’s relations with Qatar or its adversaries. But that is no reason for complacency.

Looking ahead, India-Qatar relations will continue to be shaped by three factors. First, Saudi and UAE hostility toward Qatar is likely to persist, casting a long shadow over India’s relations with all three countries — each of which is a major trade partner, hosts many thousands of Indian citizens, and constitutes an important source of remittances.

Second, Qatar’s recent withdrawal from OPEC and corresponding decision to increase LNG exports underscores the country’s importance in world gas markets and as a crucial LNG supplier for India at a time when Delhi is seeking to augment the share of cleaner primary energy resources to fuel the country’s economy.[15]

Most importantly, over the years India has assiduously maintained a neutral position in all the region’s internecine conflicts and feuds.[16] This approach, which has, if anything, hardened under the Modi administration, strongly indicates that India will take every precaution to ensure that relations with Qatar remain on an even keel.

Regardless of the results of the upcoming general elections in India, any Indian government will look to sustain the current momentum of positive relations and heighten the benefits it obtains from ties with Qatar. Looking ahead, the following four issues deserve a place on the bilateral agenda. First, Delhi should prioritize negotiations for the protection of Indian expatriate workers in Qatar, many of whom have experienced various forms of labor abuse.[17] Second, India could seek to collaborate with Qatar on developing a cleaner and more energy efficient environment.[18] Third, in light of the popularity of Bollywood among Qataris, India should seek to boost its “soft power” influence through additional avenues of cultural exchange. Finally, the bilateral relationship can be further strengthened by continued cooperation in the education sector. The presence of many Western universities in Qatar is an attractive feature for Indian students who are looking for quality education abroad without the long distances and high living costs of the West. Thus, there is scope for the further development of the India-Qatar relationship, which has proven strong and resilient throughout the seemingly intractable diplomatic crisis.

[8] Government of India, Ministry of External Affairs, “India-Qatar Joint Statement during the visit of Prime Minister to Qatar,” June 5, 2016, documents.htm?dtl/26870/IndiaQatar+Joint+Statement+during+the+visit+of+Prime+Minister+to+Qatar.

[9] “Mahendra Pande asked: How India views the coming of Muslim Brotherhood into power? Would it give rise to Islamic extremism?” Observer Research Foundation, http://www.idsa.in/askanexpert/MuslimBrotherhoodintopower.