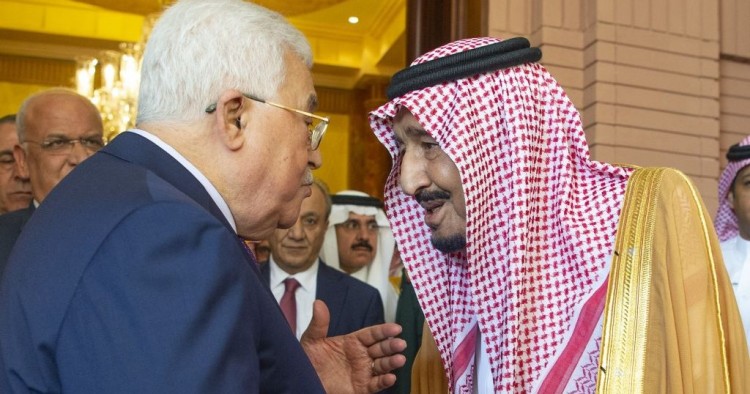 There is much that we don’t know about the relationship between the Palestinians and the Gulf states. When we hear about it, it is mainly in the Israeli-Palestinian context, and usually when the Gulf states try to establish a truce following an outbreak of violence or offer to mediate as part of a peace initiative. However, when Israel is removed from the equation, the Gulf states’ involvement in the West Bank and Gaza remains largely in the shadows, attracting little media or scholarly interest. Why is Mahmoud Abbas, the president of the Palestinian Authority (PA) and a frequent traveler to the Gulf, boycotting the UAE? How did Qatar, one of the staunchest supporters of Hamas, also become an important ally of Abbas? How can we explain the difference between Saudi Arabia’s massive economic support to the Palestinians and its failure to promote its own interests in this arena? The answers to these questions illuminate the complexity of Gulf-Palestinian relations and can be traced back to the relationships between the Gulf states themselves.

In the past decade, serious rifts have opened up between the Gulf states. In effect, the Gulf is now split into three different blocs. At one end is Qatar, which has been growing ever closer to Iran and Turkey following the diplomatic and economic blockade imposed by Saudi Arabia, the UAE, Bahrain, and Egypt in June 2017. The second bloc represents the growing alliance between Saudi Arabia, the UAE, and Bahrain. The third is the neutral bloc of Oman and Kuwait, which have chosen to set themselves apart from their neighbors. This division is one of the keys to understanding the foreign policies of the Gulf states, and specifically their relations with the Palestinian leadership and the Palestinian people. One of the major implications of these intra-Gulf rifts is the growing element of competition in their foreign policy, which not only affects relations between the blocs but also within them.

The Gulf states’ involvement in Palestinian affairs takes the form of providing economic support, offering political backing for various Palestinian actors, hosting Palestinian figures in their territories (such as Hamas leaders in Qatar and Mohammed Dahlan in the UAE), and making occasional attempts at mediation. The Gulf states leverage their patronage in these areas to reinforce their status as influential leaders in the Arab-Muslim world. This is especially true for Saudi Arabia, Qatar, and the UAE, which since the Arab Spring have adopted a vigorous and proactive foreign policy to expand their influence abroad. In the Palestinian arena, Qatar ramped up its involvement in Gaza; Saudi Arabia increased its efforts to promote regional initiatives, occasionally even without Palestinian support; and the UAE discovered numerous opportunities to use its close ally Egypt to gain a foothold.

The Gulf states have had a marked impact on leadership struggles in Palestine through their extensive support for different political parties and local leaders, which largely reflect their own divisions. On the same day Qatar’s neighbors announced that they were severing all diplomatic ties with it, Saudi Foreign Minister Adel al-Jubeir was interviewed as saying that by supporting Hamas and the Muslim Brotherhood, Doha was undermining the PA. His statement highlights how the Gulf states’ engagement with the Palestine cause and in internal Palestinian politics is used to promote their own interests and rivalries — rivalries that have led them to become entrenched in increasingly polarized political and ideological positions.

In the past two and a half years the hostility between Qatar and the UAE has been unmistakable. When Qatar encountered logistical issues in transferring financial aid to Gaza, the UAE leadership stepped in to establish an unusual collaboration with senior Hamas officials in Gaza, including Yahya Sinwar. The UAE proceeded to transfer larger sums to Hamas than before, and it was even included in the multilateral talks in Cairo with Egypt, Dahlan’s representatives, and Hamas. Still, much of the UAE’s efforts to expand its role in this area are taking place behind the scenes. In 2018, while Qatar apparently provided support and financing for the March of Return protest demonstrations along the security fence, which enthralled thousands of Palestinians, high-ranking official UAE delegations stepped up the frequency of their visits to Egypt, possibly to explore options for mediating between the parties to the conflict.

The role of the mediator is considered an important political instrument in the Gulf, and one that brings with it influence and prestige. Identifying the mediator in each round of violence in Gaza clearly reveals the competition between Qatar and Egypt. Both states pandered to Hamas in their desire to lead a diplomatic process. Qatar’s support for the Muslim Brotherhood in Egypt under former President Mohammed Morsi and during the protests that led to his rise to power is the reason that Cairo is now so hostile to Doha under President Abdel-Fattah el-Sisi. Viewed through that lens, it becomes easier to understand how the split between these two states, and the UAE’s alliance with Egypt, created an opportunity for the UAE to extend its competition with Qatar to the Palestinian arena.

The politics of mediation do not end there, however. Oman made headlines when it hosted President Abbas followed shortly thereafter by Prime Minister Benjamin Netanyahu, in an effort to promote a diplomatic dialogue between the two sides and serve as the mediator in the process. As for Bahrain, little is heard about its relationship with the Palestinians, although Manama did host the economic workshop for the U.S. peace initiative on the Israeli-Palestinian conflict — the so-called “deal of the century.” In the context of the Gulf, the politics of mediation highlight the existence of multiple centers of power and influence, on the one hand, and the constraints under which power and influence operate, on the other. The Palestinians have a major say in choosing the actors they consider most relevant and convenient for them, which is why Oman’s success in hosting Abbas under the framework of an optional negotiation process, however preliminary, underscores the limits of Saudi influence in the Palestinian arena. For nearly four decades, Saudi Arabia has initiated peace plans and proposed to mediate in the Israeli-Palestinian conflict, but has been unable to put its proposals into action, despite its remarkable political power in the Middle East.

As the Gulf states intensify their competition over Palestinian hearts, the Palestinian leadership has come to play a more significant role in shaping its relations with the Gulf monarchies. Although the UAE’s decision to side with Dahlan was beneficial in its struggle with Qatar and gave it access to Gaza, it also riled Abbas, Dahlan’s greatest political rival, who has refrained from visiting the UAE since 2011. Abbas has instead chosen to move closer to Qatar, even though the latter has done much to bolster Hamas. Despite the conflicting interests, the PA leadership still considers Qatar as one of the most committed supporters of the national Palestinian cause: Unlike the UAE, which transfers aid to the West Bank through the Red Crescent and UN organizations, Qatar provides direct economic support to the Palestinians.

With respect to Saudi Arabia, it seems that Abbas’ persistent objections to Saudi support for the U.S. peace initiative finally resulted in a change in Saudi foreign policy toward the Palestinians and in the nature of its involvement. At a meeting in November between President Abbas, King Salman, and Crown Prince Mohammed bin Salman, the three decided to establish a joint economic committee to develop collaborative projects in the business sector. This move signals Saudi Arabia’s understanding that the best way to increase its involvement in the Palestinian sphere is to pursue pragmatic, achievable steps rather than wide-ranging diplomatic initiatives.

While the Arab states affected by the Arab Spring continue to focus on their domestic concerns, and the Palestinians have turned their back on the Americans, the Gulf states are wielding more influence in the Palestinian arena than ever before. These states are investing considerable time, energy, and resources to create a broad foundation for even greater involvement in the future — by joining forces with the Palestinians through joint projects, creating dependencies, and betting on potential future political leaders. It is therefore clear that we cannot fully understand Palestinian politics without analyzing the involvement of the Gulf states.

Dr. Moran Zaga is a Policy Fellow at Mitvim - The Israeli Institute for Regional Foreign Policies and a Research Fellow of the Chaikin Geostrategy Chair at Haifa University. The views expressed in this piece are her own.