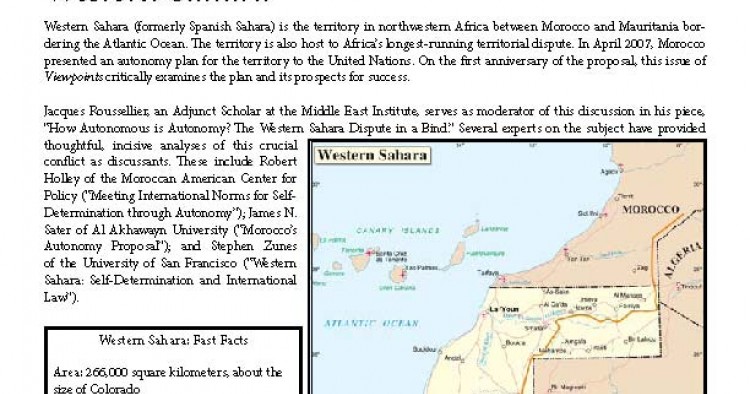 Western Sahara (formerly Spanish Sahara) is the territory in northwestern Africa between Morocco and Mauritania bordering the Atlantic Ocean. The territory is also host to Africa’s longest-running territorial dispute. In April 2007, Morocco presented an autonomy plan for the territory to the United Nations. On the first anniversary of the proposal, this issue of Viewpoints critically examines the plan and its prospects for success.

Jacques Roussellier, an Adjunct Scholar at the Middle East Institute, serves as moderator of this discussion in his piece, “How Autonomous is Autonomy? The Western Sahara Dispute in a Bind.” Several experts on the subject have provided thoughtful, incisive analyses of this crucial conflict as discussants. These include Robert Holley of the Moroccan American Center for Policy (“Meeting International Norms for Self-Determination through Autonomy”); James N. Sater of Al Akhawayn University (“Morocco’s Autonomy Proposal”); and Stephen Zunes of the University of San Francisco (“Western Sahara: Self-Determination and International Law”).