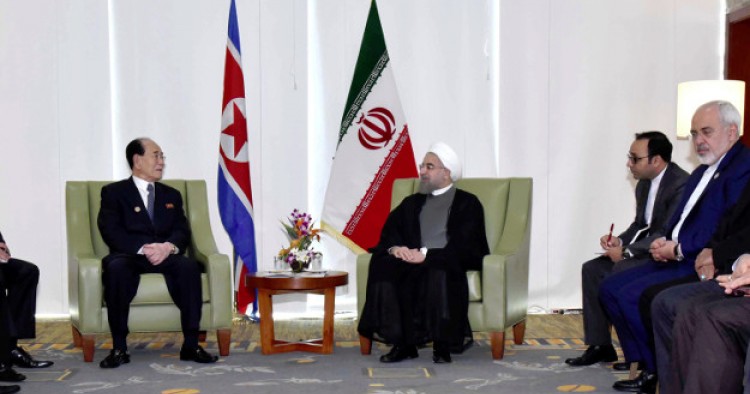 The head of the Iranian parliament’s National Security and Foreign Policy Committee has called for further expansion of bilateral ties between Iran and North Korea. “The parliamentary friendship group of the Islamic Republic of Iran and North Korea at the parliament is ready to facilitate and accelerate cooperation between the two countries in different fields,” Alaeddin Boroujerdi said in a meeting with North Korean Ambassador to Tehran Kang Sam-hyon. The Iranian lawmaker, who also chairs the Tehran-Pyongyang friendship group at the parliament, added that there “are great opportunities for expanded cooperation” and called for more frequent meetings between senior officials of the two countries in the near future.

The North Korean ambassador echoed a similar sentiment and stressed that closer ties between the two countries would help confront the United States. “Given America’s unprecedented sanctions against Iran and North Korea, using these capacities can benefit both countries,” Sam-hyon was quoted as saying by state-run Islamic Republic News Agency. “The source of terrorism in the world and the region is America, Western countries and Israel,” he added, referring to the June 7 terrorist attacks in Tehran. “We support Iran’s firm stances against terrorism and are delighted that Iran’s position is getting stronger in the Persian Gulf.” The North Korean diplomat invited Boroujerdi and members of the Iran-North Korea parliamentary friendship group to visit Pyongyang.

Comment: Boroujerdi, a senior lawmaker who plays an influential role in Iran’s foreign policy, has placed a great deal of emphasis on expanding Iran’s diplomatic, economic and military ties with North Korea in recent months. Part of this increased engagement is to counter the Trump administration’s efforts to isolate the two countries. On January 30, Boroujerdi told North Korea’s Sam-hyon that “Iran and North Korea are at a united front against interference and bullying by America and its allies and they resist different kinds of pressures and sanctions imposed by the West on both countries.” The Korean diplomat, according to the Iranian media, said that expanding ties with Tehran in the political, economic and defense arenas was among Pyongyang’s top priorities, and added: “America is the source of instability and insecurity in different parts of the world, and North Korea backs Iran’s positions to oppose America’s bullying and imperialistic interference.”

Similarly, Iranian Parliament Speaker Ali Larijani met with his North Korean counterpart Choe Thae-bok in February and the two sides called for further strengthening ties between their countries, the Iranian parliament’s official website reported. “We have always pursued lasting relations with North Korea. In addition, we thank the North Korea delegation for attending the conference in support of the Palestinian people. The Palestinian issue is a definitely an important matter, and your participation in this conference is valuable,” Larijani told Thae-bok, the chairman of North Korea’s Supreme People’s Assembly in the meeting, who was visiting Tehran to attend an international conference in support of the Palestinians. “Americans constantly want to pressure independent countries and they don’t want peace to be established in different regions. Therefore, the Islamic Republic’s approach is to create peace in the Middle East and the Korean peninsula. And we oppose the United States’ provocative actions in this regard,” he added.

Cooperation between Tehran and Pyongyang, especially in the military field, has been a matter of grave concern for Washington and its allies for a long time. A Congressional Research Service report last year noted that Iran “has developed a close working relationship with North Korea on many ballistic missile programs.” In February, Iran’s Defense Minister Brigadier General Hossein Dehghan revealed that Iran had imported supplies for the country’s shipping industry from North Korea.

Shortly after Donald Trump took the oath of office, the White House website released a policy statement – titled “Making Our Military Strong Again” – which stated that the administration will “develop a state-of-the-art missile defense system to protect against missile-based attacks from states like Iran and North Korea.” In a U.S. Congressional hearing titled “Iran on Notice” on February 16, American lawmakers also raised the issue of cooperation between North Korean and Iranian militaries.