Iran and Turkey: Power dynamics in the South Caucasus 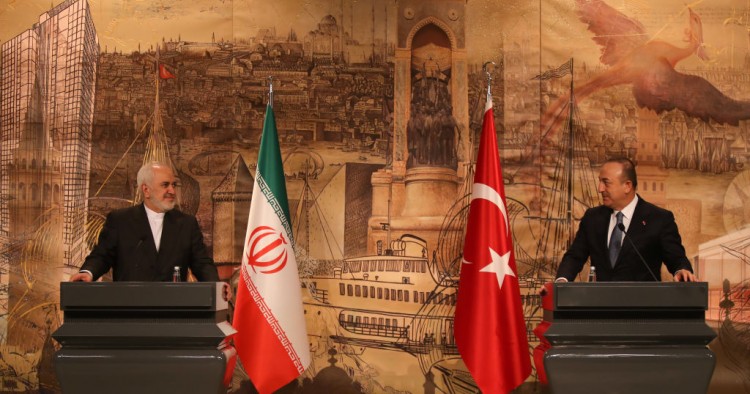 Iran was caught off guard by the July 2020 round of conflict between Armenia and Azerbaijan. Tehran was even more alarmed by the proactive role Moscow and Ankara played during and in the aftermath of the six-week war that ended with the Russian-brokered ceasefire on November 10. In fear of being kept on the sidelines, Iran’s Foreign Minister Javad Zarif embarked on a regional tour last month to Azerbaijan, Armenia, Russia, Georgia and Turkey.

The visits were ostensibly aimed at keeping Iran at the table amidst heightened uncertainty in the South Caucasus about the ramifications of the latest round of war. As Zarif put it, his intention for the tour was to find ways regional countries could “work together to help the Nagorno-Karabakh crisis [to come to an end] and [improve] the situation of peace and stability.” That might very well be, but there is also no doubt that Tehran clearly senses it has been too neglectful of the significance of the South Caucasus for Iranian geostrategic, including economic, interests.

Time will show if Tehran can recover any lost ground but its recently announced pursuit of a “six-party union” (Armenia, Azerbaijan, Georgia, Iran, Russia, and Turkey) is more a case of wishful thinking than a cogent strategy. The question for Tehran is less about whether it can enter into agreements with Armenia, Azerbaijan, and Georgia. All three states already have fairly good working relations with Tehran and will mostly hold back in developing these further until US-Iran tensions subside and until the wrath of Washington can be avoided when cooperating with Tehran. Instead, the Iranians should be far more attentive to Russian and Turkish interests and whether they, despite what is publicly said, would give Iran much room to maneuver in the South Caucasus. At the very least, if relations with Turkey are anything to go by, Tehran can expect stiff competition from the Turks.

During Zarif’s visit to Istanbul in late January 2021, Iran and Turkey officially declared to be seeking common ground and solutions to a number of policy challenges, including the future of Syria and stabilizing the South Caucasus through a multilateral effort. The Turks also publicly urged Washington to remove sanctions on Iran. It all appeared very convivial. This pledge of cooperation followed a period in 2019-2020 where Iranian-Turkish relations experienced many ups and downs and even turbulence in various fields.

Turkish trade with Iran is a case in point. Bilateral commerce declined sharply between 2017 and 2020. US sanctions were not the only reason behind this drop. For its part, Tehran certainly believed the Turks used American sanctions on Iran as a pretext to reduce trade. Not even the argument that the coronavirus crisis had reduced demand in Turkey for Iranian energy and goods had much credence in Tehran. Thanks to border closures, land-based trade had come to a halt for much of 2020 but Turkish actions preceding the pandemic were as, if not more, telling for the Iranians.

When, in early 2020, reported Kurdish militants blew up a section of a gas pipeline from Iran to Turkey, Tehran was quick to offer to jointly repair the damaged pipeline. The Turks ignored this offer, leading Iran’s Oil Minister Bijan Zangeneh to accuse Ankara of being an irresponsible partner. Zangeneh is among the more diplomatic-minded senior officials in Tehran. His publicly expressed anger spoke volumes about Iran’s state of indignation at Turkey. Not only were the Turks refusing to repair the pipeline and restore natural gas imports from Iran, they were at the same time increasing Liquified Natural Gas (LNG) imports from the US.

The Turks could point to lower prices for American LNG supplies than the gas that comes from Iran via the pipeline. To Iran, however, this was less about commercial logic and more to do with Turkey simply looking to downgrade its energy ties with Iran. There is also no indication Iran and Turkey will extend the 25-year gas contract set to expire in 2026. Turkish energy imports from Iran have been the bedrock of bilateral trade. The Turks might have very good reasons to reconsider their energy trade with Iran, and it has to be remembered that Ankara’s energy policy recalibration, aimed at energy security through diversification, is not only impacting Iran. Turkish gas imports from Russia have also declined.

In September 2020, the presidents of Iran and Turkey recommitted to increasing bilateral trade to $30 billion a year. Iranian-Turkish trade has sat at around $10 billion a year for the past decade, so the mentioned goal would be a significant leap. At the same time, in the last decade alone, many promises to increase trade have been left unrealized. But this latest policy goal was announced at a time when trade volumes were in fact fast declining. In the first six months of 2020, trade between Iran and Turkey declined 73 percent to about $1 billion.

In the second half of 2020, another reality jolted Iranian-Turkish relations. Tehran was blindsided by the war in the South Caucasus. The Iranians appear also to have been equally startled by the extent of Russian and Turkish involvement during the fighting and in the aftermath of the ceasefire that was brokered by Moscow but where Ankara was – unlike Iran – a party to the negotiations.

Over the last 20 years or so, fearing Russia’s reaction to an assertive Iranian policy in the South Caucasus, Tehran has kept a relatively low profile in the region. This was at a time when the Turks were busy recalibrating their approach to the region. Most notably, the Turks increased cooperation with Azerbaijan in military-to-military relations while working closely with Baku to establish Turkey as Azerbaijan’s principal transit route for natural gas exports to Europe.

On Dec. 31, 2020, Europe received its first natural gas shipment from Azerbaijan via the Southern Gas Corridor (SGC). The 3,500km pipeline transports gas from the Shah Deniz field in Azerbaijan’s sector of the Caspian Sea via Georgia and Turkey to Italy. Ankara supported this strategic energy pipeline project and helped Baku to secure European political and financial support.

In contrast, the Turks have since the early 1990s stalled whenever Tehran has requested Turkish cooperation in providing a pipeline transit route for Iranian gas to Europe. At this point, Tehran has two options. The first is to give up on the European gas market entirely and focus on markets in Asia. Alternatively, Iran could reach an agreement with Baku and Ankara to feed Iranian gas into the existing pipelines built by the Azerbaijanis that travel through Turkish territory before arriving in Europe.

In the 1990s, Ankara successfully exploited US sanctions on Iran to sideline Tehran from key regional infrastructure projects. Most notably, any proposals for pipeline routes for Caspian oil and gas to go through Iran were effectively vetoed by Washington. This is why the Baku-Tbilisi-Ceyhan pipeline was built: to take Azerbaijani oil to Turkey, even though the route through Iran to the Persian Gulf and world markets was shorter and less expensive. An even greater free-for-all geopolitical dynamic is at play today. The latest war in the South Caucasus has created new possibilities for regional infrastructure projects. Turkey wants to maintain its role as a transit hub for energy and trade. The Iranians are deeply concerned about again being left out as they were in the 1990s.

Alex Vatanka is director of MEI's Iran Program and senior fellow with Frontier Europe Initiative. The views expressed here are his own.