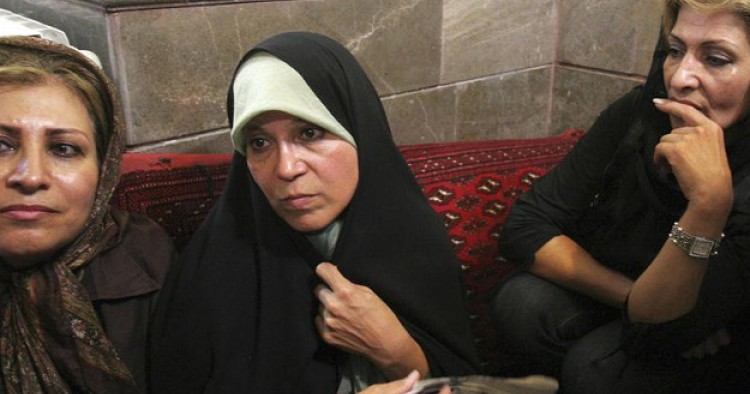 Judicial authorities in Iran have sentenced the daughter of late president Akbar Hashemi Rafsanjani to six months in jail for “spreading lies to disturb the public opinion about the Judiciary and Sepah [Islamic Revolution Guards Corps],” opposition website Kaleme reported today. According to the reformist website, the case against Faezeh Hashemi was opened after she commented on the controversial bank accounts of Judiciary Chief Sadegh Larijani. She has 21 days to appeal the verdict.

Comment: Hashemi’s conviction is the latest in a new wave of regime crackdown on reformist activists in the run-up to the country’s presidential elections slated for May. According to reports in the Iranian media, I.R.G.C. agents have arrested at least a dozen journalists and reformist activists who use the Telegram application this week – prompting Deputy Parliament Speaker Ali Motahari to threaten to impeach the minister of intelligence. Earlier today, one of President Hassan Rouhani’s advisors took to Twitter to criticize the recent “harassment operation” by the country’s security agencies and linked the latest arrests to the upcoming elections.

Hashemi is a human rights activist and a former member of parliament representing Tehran. It is not the first time she goes to jail. She was incarcerated for six months in 2012 because of her social and political activism. She had also been briefly detained after the 2009 presidential elections because of her support for Mir Hossein Mousavi, who has been under house arrest in Iran since February 2011. Hashemi’s father was one of the founders of the Islamic Republic. He died in January.

As the report in Kaleme indicates, however, the arrest of Hashemi is also related to her remarks about the Judiciary’s bank accounts. In a similar move, security officials in November tried to arrest Mahmoud Sadeghi, a university lecturer and lawmaker from Tehran – disregarding his parliamentary immunity – after he called on the Judiciary chief to clarify allegations that he had deposited public funds into his private accounts. Amadnews reported at the time that Larijani had deposited 2,300 billion tomans ($71 million) in his 63 personal accounts. According to the constitution, the Judiciary in Iran is only answerable to the Supreme Leader Ali Khamenei. And Khamenei has proven to be both protective of his control over the Judiciary and opposed to publicizing cases of corruption among officials.