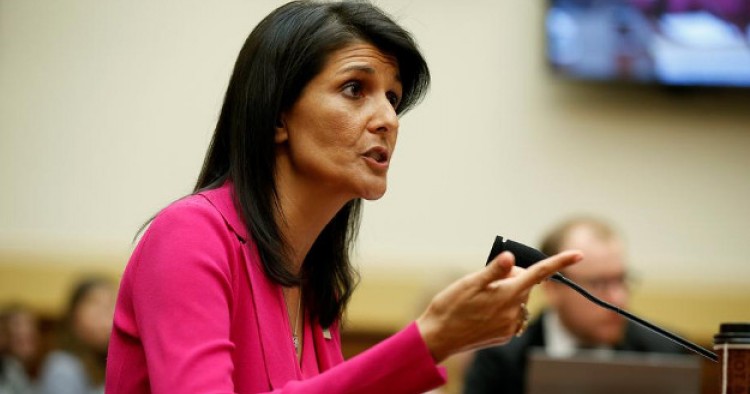 The Iranian Foreign Ministry said Monday that U.S. Ambassador to the U.N. Nikki Haley’s visit to Vienna for talks with the International Atomic Energy Agency officials is a "fruitless" attempt to undermine the 2015 nuclear accord between Iran and world powers, the Iranian media reported "The IAEA's responsibilities have been fully specified and defined. What has been released about the nuclear deal and Iran or declared by the Agency all indicate Iran's commitment to its undertakings and I think that there is no ambiguity in this regard," Foreign Ministry Spokesman Bahram Ghassemi told reporters in Tehran. He stressed Haley’s visit will not achieve anything because all latest IAEA reports have confirmed Iran’s compliance with the terms of the nuclear agreement.

Comment: Haley is set to travel to Vienna this week to express the Trump administration’s concerns regarding Iran’s compliance with the nuclear deal to IAEA officials. While the nuclear watchdog has certified Iran’s compliance, the top U.S. diplomat at the U.N. said earlier this month that the administration remains skeptical of Iran’s adherence to the terms of the nuclear accord. “Iran cannot be allowed to use the nuclear deal to hold the world hostage,” she said in a press statement after Iranian President Hassan Rouhani threatened to leave the accord if U.S. slaps more sanctions on Iran.

While the Trump administration last month certified that Tehran was in compliance with the terms of the nuclear deal, it announced new sanctions against the Islamic Republic and emphasized that the administration was “deeply concerned about Iran's malign activities across the Middle East which undermine regional stability, security and prosperity." The U.S. media also reported that Trump only reluctantly agreed with the certification and is considering abandoning the accord as the administration is currently reassessing U.S. overall policy toward Iran.

Iranian leaders have made it clear in the past that Tehran will not renegotiate the nuclear deal with the United States and other world powers. Last week, the head of the Atomic Energy Organization of Iran (A.E.O.I.) warned that Tehran would keep all options on the table if Washington walked away from the nuclear agreement. He has also noted that Tehran can resume 20 percent enrichment quite easily.