Iran is escalating with the US, not Saudi 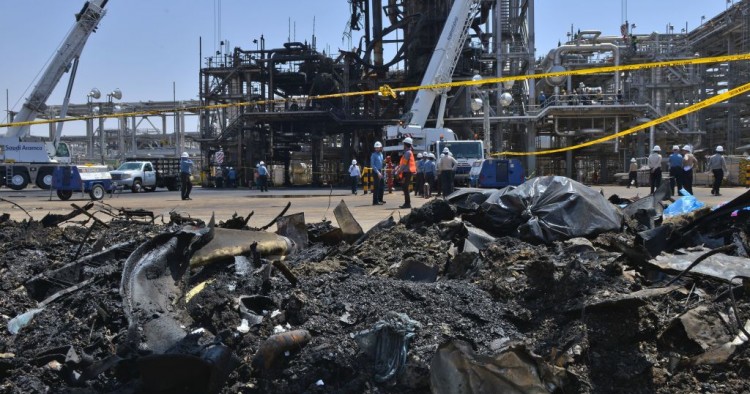 The Sept. 14 attack on Saudi Aramco’s oil facility generated precisely the type of confusion that the Iranian regime aimed to create. Once the magnitude of the attack and its impact on the oil market became clear, policy discussions and public discourse in Washington centered on whether the United States needs to protect the Saudis, while completely ignoring that the attack was a direct result of the U.S.-Iran escalation.

That Iran is the culprit behind the attack on the Abqaiq and Kurais oil installations, regardless of where it originated, should not have come as a surprise to anyone. A little over a year ago, Iranian President Hassan Rouhani threatened to disrupt oil shipments “from neighboring countries” if Washington forced countries to stop buying Iranian oil. “Assuming that Iran could become the only oil producer unable to export its oil is a wrong assumption,” he said. Iran’s confident tone stems from the realization that the U.S. is no longer interested in opening new fronts in the Middle East and has proven unable to protect Saudi Arabia from numerous Houthi attacks over the past two years.

Despite Iran’s clear motives, it has tried to influence events by driving a narrative of victimization to solicit sympathy for the perpetrator of the attack rather than the victim. By claiming that the Houthis alone are responsible for the planning and execution of the attack in response to “aggression,” Iran is trying to frame the conflict as a regional one in which the U.S. should not be intervening. By taking the focus off of U.S.-Iran tensions, Iran instead puts the pressure on Saudi Arabia and the United Arab Emirates to withdraw from Yemen.

The intensification we are seeing in the region today has been building up since President Donald Trump pulled out of the Iran nuclear deal in May 2018, ending the agreement to lift sanctions on Iran in exchange for curbing its nuclear program. As part of Trump’s “maximum pressure” campaign, which was designed to force the Iran regime to negotiate a new nuclear deal that would also address its ballistic missile program, support for extremist groups, and threats against its neighbors and U.S. allies, Washington used its power to pressure other countries to halt all imports of Iranian oil. Iran, the third-largest producer in OPEC, was hit hard by the reimposition of sanctions, with Secretary of State Mike Pompeo saying U.S. measures removed around 2.7 million barrels per day (bpd) of Iranian oil from global markets. As of July Iran’s exporting capacity was reported to have dropped to as little as 100,000 bpd with a threat that its oil sales could reach zero. Backed into a corner, Iran is seeking to change the course of events by imposing its will, rather than bending to that of the U.S.

It’s useful to remember that Iranian officials do not make empty threats. Last July, Iran cautioned that it could obstruct oil shipping lanes in retaliation for what it perceived as hostile U.S. policies. Speaking to Iran’s Tansim news agency, the commander of the Islamic Revolutionary Guard Corps (IRGC), Mohammad Ali Jafari, directly addressed the threat of U.S. sanctions, saying, “We will make the enemy understand that either everyone can use the Strait of Hormuz or no one [can].”

Before escalating, Iran tried to ignore U.S. sanctions and sought an alternative accommodation with Europe, which holds more sympathetic views toward the Islamic Republic. Rouhani turned to Britain, France, and Germany, as well as Russia and China, which have supported the Iran nuclear deal despite the U.S. decision to withdraw. But when the discussions went nowhere, the IRGC immediately took charge, firing warning shots at several Saudi sites using one of their favorite proxies, the Houthi rebels.

The IRGC views escalation as a practical course of action because it has little to lose. As events have proven, it did not seem to matter much if Iran was responsible for placing mines on tankers, disrupting shipping in the Strait of Hormuz, or even shooting down an American drone. Given the IRGC’s appetite for escalation, avoiding a confrontation with this seemingly reckless actor was a good judgement call.

However, the last straw for the IRGC was Trump’s disinclination to endorse French President Emmanuel Macron's $15 billion line of credit initiative, which would have given Iran much-needed sanctions relief. For this, Tehran needed to demonstrate its objection by hurting the United States and the global economy. The attack on the Abqaiq and Kurais facilities and the resulting fire damage cut Saudi oil production by 5.7 million bpd, which represents more than half of the kingdom’s exports and around 5% of the world’s total production.

But despite the risks associated with its attacks, Iran is not escalating recklessly. It understands the American public has no appetite for war, and that there are checks and balances that could prevent Trump from taking action without congressional authorization or international backing. Furthermore, the Islamic Republic is taking full advantage of the Democratic establishment’s guilt complex for greenlighting the Saudi intervention in Yemen, as well as the highly partisan climate surrounding Trump’s presidency. Iran is also emboldened by the antipathy toward the kingdom for its alleged role in the murder of Saudi journalist Jamal Khashoggi, which garnered more attention than Iran’s 40 years of violations against its journalists, citizens, and foreign visitors combined.

Between sanctions or military action, Iran prefers the latter, as it has years of experience launching low-level attacks that are difficult for the U.S. to respond to, but problematic to ignore. Through its proxies in the Middle East, the IRGC has shown its ability to use asymmetrical warfare, which U.S. defense systems in the region are unable to confront effectively.

In some ways, Iran has the upper hand. It has carefully observed U.S. involvement in Iraq, Lebanon, Syria, and Yemen across different administrations, and has a good grasp of the possibilities and limitations of U.S. policymaking and the importance of public opinion, which it sought to heavily influence. A May 2019 report revealed Iran’s sophisticated efforts to create fake news and websites to advance its misinformation and propaganda with the goal of creating a “false narrative” on social media that would cast its adversaries in a bad light.

Realizing that American pressure on its economy will not end soon, Iran wants to demonstrate that it will not yield in the face of sanctions. Given the current confusion and lack of clear support for the Saudis, Tehran will most likely continue its escalation campaign in the hopes that a drastic rise in oil prices will make the international community force Trump to ease the pressure on Iran. For now, Iran’s preferred path forward is to raise the stakes and see if Trump calls its hand.

The IRGC’s behavior and the empowerment of the Houthi militias in Yemen make it clear that they have the ability to inflict real harm should their interests be threatened. A U.S. military confrontation with Iran will play into the IRGC’s hands as it is sanctions, and not military action, that the Iranian regime fears most. This is not to imply that military action should be taken off the table, but that any action should carefully weigh the consequences and aim to achieve specific objectives that would deter Iran’s malign behavior rather than encourage it.