Iran Expands Its Economic Sphere of Influence in Syria 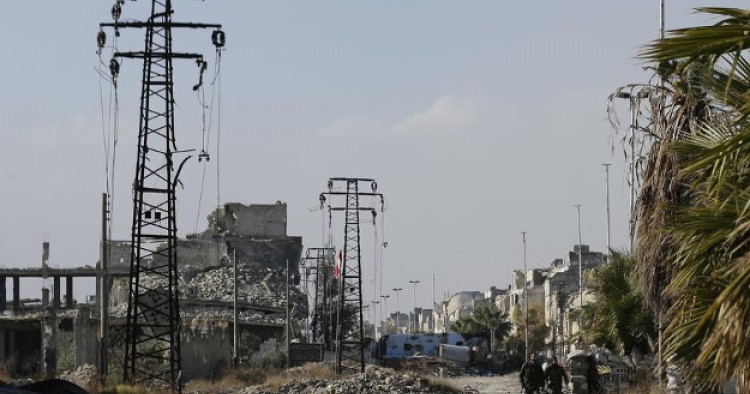 In the latest sign that Tehran is seeking to expand its economic sphere of influence in Syria, the Iranian government on Tuesday signed several agreements with Damascus to restore Syria’s power grid and infrastructure. Although the Syrian war is far from over, the Islamic Revolution Guards Corps (I.R.G.C.) is already looking for financial rewards for its support to the embattled regime of Bashar al-Assad in the past six years. Since the seizure of the northern Syrian city of Aleppo in December, the Syrian government has granted I.R.G.C. companies lucrative contracts on a no-bidding basis. As in Lebanon, the I.R.G.C. is complementing its hard power mission with economic projects and other soft power strategies to consolidate its long-term presence and influence in Syria.

According to Iranian and Syrian media, the contracts, “worth several hundreds of euros,” were signed during a meeting between Iran’s Acting Minister of Energy Sattar Mahmoudi with his Syrian counterpart Zahir Kharboutli in Tehran. "Most of these contracts are related to the reconstruction of electricity equipment, power plants and transmission lines so that we can provide better services to the Syrian clients," Mahmoudi said after the meeting with the visiting Syrian delegation. The agreements include exporting five gas-fired power plants to Syria’s northwestern city of Aleppo. The Mapna Group, an Iranian enterprise with suspected ties to the I.R.G.C., will implement the 130-million-euro project.

In addition, the Syrian minister reportedly signed preliminary agreements with Mahmoudi on the restoration of Damascus’ main electricity station as well as power plants in the Syrian provinces of Homs and Deir Ezzor. The project to reconstruct the 90-megawatt plant in Deir Ezzor comes as the Syrian Army and Iranian-led forces are making steady advances to recapture the region from the Islamic State. Based on another memorandum of understanding, Syria will also import 540-megawatts of electricity from Iran to its Latakia Province. Speaking to reporters after the meeting, Mahmoudi stressed that Iran will play a significant role in Syria’s reconstruction and claimed that the Syrian government and people welcome Iran’s participation in the country’s recovery process.

The Syrian government is heavily indebted to Tehran for its support as the I.R.G.C. and its regional proxies have played a significant role in Assad’s survival. It is therefore no surprise that the I.R.G.C. is now seeking financial dividends in return and Damascus obliges. During Prime Minister Imad Khamis’ visit to Tehran in January, the Iranian government signed several agreements with the Syrian delegation. One major contract to build a mobile phone network in Syria was awarded to the I.R.G.C.-affiliated Mobile Telecommunication Company of Iran – delivering Iran’s elite military force an additional source of revenue. The I.R.G.C. already controls much of Iran’s telecommunications sector, and building Syria’s mobile network will also provide the I.R.G.C. and its elite Quds Force with a valuable intelligence and surveillance tool.

It is worth noting that an Iranian conglomerate bidding for the same project in 2010 did not make the final shortlist as it could not compete with France’s Orange S.A. and United Arab Emirate’s Etisalat Telecommunications Company.

With the Syrian regime now in control of most of Syria’s population centers, Iranian exports to Syria are increasing. In 2010, prior to the start of Syrian conflict, the volume of annual trade between Iran and Syria had reached its peak of $545 million – with Syria’s exports to Iran accounting for about 30 percent. Bilateral trade began to shrink significantly after the war broke out.

In April this year, however, Iran’s trade attaché at the embassy in Damascus, Ali Kazmeni, said annual trade between the two countries had surpassed one billion dollars – nearly double the amount of the pre-war period. He revealed that Tehran and Damascus plan to build two shipping lines to boost trade and expressed the hope that Iranian exports to Syria will increase further in the near future. “The Syrian markets are awash with merchandise from Saudi Arabia, Jordan and other Arab countries, whereas the Syrian people and government are keen to use Iranian goods and products,” he claimed.

Last month, when Syria opened the country’s first international trade fair in six years, Iran was the largest participant, with over 30 Iranian companies attending the event. On the sidelines of the event, the Iranian delegation told Syria’s Minister of Economy and Foreign Trade Mohammad Samer al-Khalil to assign a special envoy to arrange for the implementation of a free trade agreement between the two countries.

In the past one year, the Iranian government has also been encouraging the country’s businessmen and builders to purchase property in Shiite-majority neighborhoods of Damascus. The two countries have also taken steps to strengthen banking relations.

While Iran’s hard power strategies and military role in Syria often make headlines, its soft power influence in the country and the broader region is largely overlooked. After Sattar signed the latest agreements with his Syrian counterpart on Tuesday, he told reporters in Tehran that the Iranian presence in Syria is more than just about bilateral economic cooperation. “It signals an ideological, visionary, humanitarian and political message to the world,” he stressed.

The I.R.G.C. systematically uses its soft power assets to complement its military strategy in the region. Through extensive soft power efforts – including myriad construction projects, charity work, cultural and media activities, and religious (often sectarian) programs – the I.R.G.C. promotes its ideological, political and military agenda at the expense of the interests of the United States and regional Arab countries.

It is worth noting that Iran’s soft power tools are not benign, but are linked with Tehran’s broader expansionist agenda in the region. For example, the I.R.G.C. established the Iranian Committee for the Reconstruction of Lebanon (I.C.R.L.) after the 2006 Israel-Hezbollah war to rebuild Hezbollah-dominated regions in southern Lebanon; two years later, the United States Department of Treasury designated the I.C.R.L. as a terrorist entity because it “financed and facilitated” the activities of Hezbollah, a U.S.-designated terrorist organization. Hassan Shateri, a Quds Force commander, headed the I.C.R.L. under the pseudonym Hessam Khoshnevis from its inception until he was killed in Syria in February 2013. According to Hassan Hijazi, a Hezbollah operative who worked with Shateri, the Quds Force commander had implemented over 5,000 construction and reconstruction projects in Lebanon. It was also the I.C.R.L. that built Hezbollah’s secret fiber optics network that sparked a dangerous political and military crisis in Lebanon in 2008.

Iran’s growing economic activity in Syria also affects the power relations between the two countries. The Islamic Republic has historically used its economic clout to seek political concessions from its smaller trading partners such as Afghanistan. While the volume of trade between Iran and Syria is rising, it disproportionately favors Tehran: Iranian exports account for about 95 percent of the one-billion-dollar trade volume between the two countries. The Syrian government has also reportedly borrowed billions of dollars from Iran in recent years. The disparity in economic ties makes Syria dependent on Tehran for the long haul at a time when the West and many regional powers are unlikely to reestablish ties with Damascus any time soon.