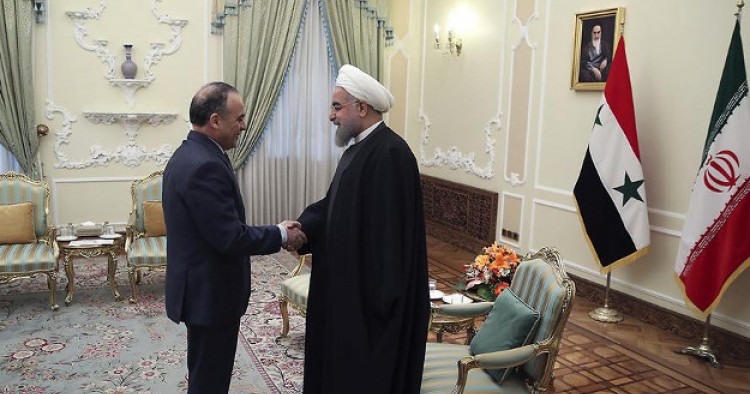 An Iranian parliamentary delegation visited Syria to seek ways of boosting bilateral ties between the two countries, particularly in the economic and trade sectors. According Iran’s Tabnak News Agency, the Iranian delegation met with Syrian Prime Minister Imad Khamis and other senior officials in Damascus. The Syrian prime minister reportedly told the visiting Iranian lawmakers that Damascus will give priority to Iranian companies in all rebuilding projects in the country. He added that the Syrian government will also provide “incentives” to the Iranian companies to take part in the reconstruction process and invest in the Syrian market. He thanked the delegation for Iran’s support for Damascus over the past six year and stressed that the “Syrian victory is an achievement for the resistance front.” The two sides also discussed the Palestinian-Israeli dispute.

Comment: Tehran has recently stepped up efforts to play a major role in Syria’s rebuilding process and become the Arab country’s leading trade partner. In December, the chief commander of Iran’s Islamic Revolution Guards corps (IRGC) revealed that the Guards, rather than the Iranian private sector or other state-run companies, will spearhead Syria’s reconstruction efforts, Tasnim News Agency reported. “Based on meetings held in the government, it was decided that this mission [participation in Syria’s rebuilding] should be assigned to Sepah [IRGC] because of the security situation in Syria,” Major General Mohammad Ali Jafari said at a gathering in Tehran. “Of course it is up to the Syrian government to decide to what extent Iran should participate in in the reconstruction [of Syria]. But the initial work for this mission is underway,” the IRGC commander added.

As Jafari indicated, the IRGC will be the sole beneficiary. In September, the Iranian government signed several agreements with Damascus to restore Syria’s power grid and infrastructure. Iran and Venezuela are also set to start constructing an oil refinery in Syria by this year’s end, according to a senior official of Iran’s Research Center of Petroleum Industry (RIPI). And the main beneficiary of growing Iranian role in Syria’s economy appears to be the Islamic Revolution Guards Corps.

The IRGC, which is heavily involved in Iran’s economy and carries out projects outside Iran, has propped up the embattled Assad regime in the past six years and is now seeking financial rewards for its role. Since the seizure of the northern Syrian city of Aleppo in December, the Syrian government has granted IRGC companies lucrative contracts on a no-bidding basis. When Syrian Prime Minister Imad Khamis visited Tehran in January, for example, the Iranian government signed several agreements with the Syrian delegation. One major contract to build a mobile phone network in Syria was awarded to the IRGC-affiliated Mobile Telecommunication Company of Iran – delivering Iran’s elite military force an additional source of revenue. As in Lebanon, the IRGC is complementing its hard power mission with economic projects and other soft power strategies to consolidate its long-term presence and influence in Syria.