As Iran heads to the polls, could Rouhani be facing impeachment? 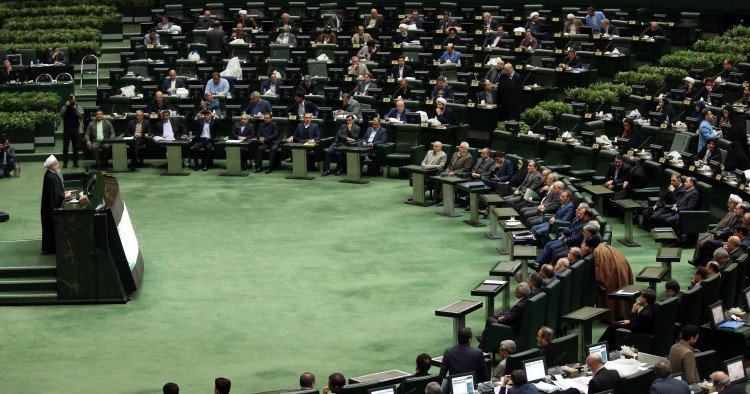 On Feb. 21, Iranians will be voting to elect a new Majlis, the country’s unicameral Parliament. Viewed from the outside, participating in the electoral system might seem futile. While the Iranian constitution recognizes popular will, as represented by an elected president and Parliament, the whole political system operates under the supreme leader, who, although appointed by an elected clerical body (the Assembly of Experts), is, in effect, answerable to no one. The Majlis does, however, have the power to remove the president — a fate that could potentially await President Hassan Rouhani if the conservatives win a majority in the upcoming elections.

The structure of power in the Islamic Republic

In the Islamic Republic power ultimately rests in the hands of the supreme leader. While in theory the Assembly of Experts can dismiss the supreme leader if his leadership is proven contrary to the Islamic system and its interests, in practice this has never happened. The supreme leader is entrusted with absolute veto power in all matters of state interest and has the power to dismiss the president. All candidates for presidential, parliamentary, and Assembly of Experts elections are vetted by the powerful Guardian Council, an institution influenced by the supreme leader because he appoints half of its members. The Guardian Council is also in charge of reviewing any law passed by Parliament to ensure that it conforms to the constitution and Islamic principles.

Despite the authoritarian tendencies enshrined in this institutional setup, which are designed to safeguard the Islamic nature of the republic, participation in elections has previously been widespread and significant. While turnout has always been higher for presidential elections, over 62 percent of eligible voters participated in the last Majlis elections. In this year’s elections, over 14,000 candidates registered for 290 seats. While the Islamic Republic wants a high turnout to claim legitimacy, especially after it acknowledged the accidental downing of a Ukrainian airliner, the state actually benefits from a low turnout, as it increases the electoral chances of its preferred conservative candidates. Whenever Iranians have voted for reformist presidents, the Guardian Council’s vetting process has ensured that the following Majlis is purged of reformists. While numerous reformists decided not to run in the upcoming elections, over half of all registered candidates did not pass the Guardian Council’s vetting process, including 90 current members of the Majlis.

The inability of reformists to change a political system that disproportionately empowers unelected figures will strengthen the influence of the Islamic Revolutionary Guard Corps (IRGC) on the upcoming election. Supreme Leader Ayatollah Ali Khamenei has himself successfully encouraged “young revolutionaries” to run as candidates. But there is nothing to suggest that the IRGC has the ability to mollify Iran’s distressed population, and it played a major role in creating the current dire situation in the first place. While the configuration of the Majlis will not substantially determine Iran’s future direction — this remains in the hands of the supreme leader — a diminished reformist contingent in Parliament could present a major challenge for President Rouhani.

During Rouhani’s time in office, his supporters have been short of an outright majority in the Majlis. However, the Trump administration’s withdrawal from the 2015 nuclear deal and the re-imposition of sanctions has dealt a severe blow to his presidency. Even some reformists have called for Rouhani’s resignation as a result of his mismanagement of several crises: a failing economy, corruption, security concerns, and gasoline price hikes that have unleashed the deadliest political unrest Iran has seen since the revolution. A return of conservatives to absolute control of the legislature could put Rouhani at risk of being impeached and dismissed from office by the Majlis, like the first elected president of the Islamic Republic, Abolhassan Banisadr. While Banisadr had close ties to Ayatollah Ruhollah Khomeini, Khomeini came to support Banisadr’s impeachment because his attempts to curtail the growing powers of the Revolutionary Guards put him at odds with the ruling clerics.

Rouhani has increasingly distanced himself in public from the supreme leader and criticized the Guardian Council. In his latest speeches, he showed his frustration with the Guardian Council and its vetting powers, saying “this is not an election, it’s an appointment.” Other voices from his administration are calling for free elections, without Guardian Council vetting, as was the case in the first election after the revolution, when Banisadr won the presidency. Some are even calling for Rouhani to initiate a reform of the Guardian Council’s powers. Such demands are not likely to achieve much, not because they are unnecessary, but because the Guardian Council has the mandate to review all new legislation from Parliament. Even if Rouhani were to get such a bill approved before the new Majlis takes office in May, it would undoubtedly be blocked by the same Guardian Council whose powers it is trying to restrict. After all, Rouhani is criticizing an electoral system designed to ensure the successful continuation of the Islamic Republic — the same system that made him president.

Eye on the top job

The issue goes beyond just political dissatisfaction with Rouhani. There have been power struggles between the supreme leader and past presidents. However, this situation it is different as Rouhani was previously considered a candidate to become the next supreme leader. There is still a slim chance of that happening, especially if Khamenei should die while Rouhani is still president. He is one of three individuals who have the authority to administer the affairs of the supreme leader until the Assembly of Experts chooses a successor. After all, this is how Khamenei himself became supreme leader: he was the president when Khomeini died.

For these reasons, a new conservative Majlis could move swiftly to dismiss Rouhani. While Khamenei has the power to oust the president directly and has outmaneuvered Rouhani and previous presidents on various occasions in the past, it is more likely that he will instead try to influence the new Majlis to start an impeachment process to remove him from office. In a recent speech, in response to the growing criticism against the Guardian Council, Khamenei called on “those who call this election an appointment” and questioned why “the elections are fair when it is in your favor, but unfair when it is not in your favor.” Facing a rigged election that offers little chance of meaningful change, many Iranians may simply decide not to turn up on Feb. 21, but a boycott will inevitably mean a win for the conservatives. And so, despite the long odds, Rouhani is urging people to vote.

Mona Samadi is an Associate Professor of International Law at Örebro University, Sweden, and specializes in various issues related to Islamic law, constitutional law, and human rights in the Middle East, particularly in Iran. The views expressed in this article are her own.

Photo by STR/AFP via Getty