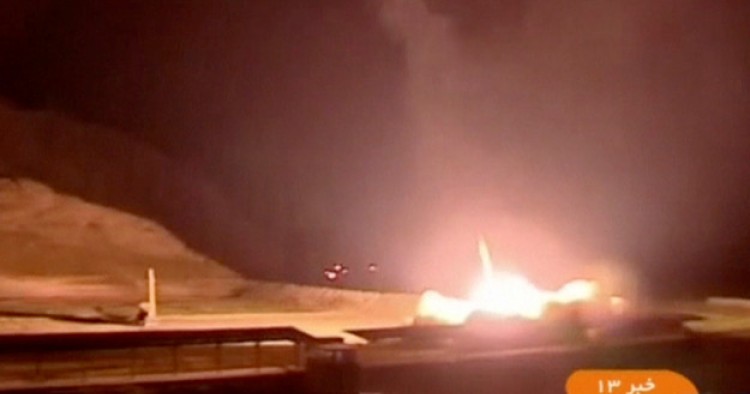 On Sunday, the Iranian military said it had launched six missiles at Islamic State positions in Syria in retaliation for the June 7 attacks in Tehran claimed by the terrorist group. A statement by the Islamic Revolution Guards Corps (I.R.G.C.) confirmed that it fired medium-range missiles from bases in the western Iranian provinces of Kermanshah and Kurdistan and killed a "large number" of Islamic State terrorists in Syria’s Deir Az Zour province. “The message of this revolutionary and retaliatory action is very clear: The Islamic Revolution Guards Corps warns Takfiri terrorists and their regional and international sponsors that if evil actions against the Iranian nation are repeated, the revolutionary wrath and flames of revenge by the Revolutionary Guards will engulf the perpetrators and their supporters,” said the statement posted on the I.R.G.C.’s official website. It added that the I.R.G.C. had made it clear that it would not “let the spilling of any pure blood go unanswered.”

Comments: After the twin attacks in Tehran claimed by the Islamic State, Iranian military and political leaders made it clear that the country would retaliate against the terrorist group. But the missile attacks on Sunday – the first missile attack by Iran outside its borders in more than a decade – were not intended to send a message to the Islamic State alone. The I.R.G.C. had extensive military assets - including thousands of militia forces - to retaliate against the Islamic State. By launching the missile strikes, however, the I.R.G.C. wanted to project power at home and abroad at a time when its credibility was at stake.

The Tehran attacks had exposed Iran’s security shortcomings and may have undermined public confidence in the I.R.G.C. To boost its image, the elite military force, in cooperation with other Iranian security and intelligence agencies, conducted extensive counterterrorism operations in recent days – reportedly dismantling sleeper cells associated with the Islamic State and arresting dozens of suspected terrorists.

The first major attack inside Iran by the Islamic State also signaled that the terrorist group has gained a foothold in Iran. It was not a coincidence that the I.R.G.C. chose to launch the missiles into Syria from the Sunni-majority provinces of Kurdistan and Kermanshah. It was meant to demonstrate that the I.R.G.C. is in charge of those regions and to project Sunni-Shiite unity inside Iran. The missile strikes were also part of the I.R.G.C.’s efforts since the June 7 attacks to present itself as the main protector of the Iranian nation and justify its costly involvement in the Syrian war.

In addition, the Syria strikes were a message to Iran’s regional rivals. “The Saudis and Americans are especially receivers of this message,” I.R.G.C. Spokesman Ramazan Sharif was quoted by the Iranian media as saying. “Obviously and clearly, some reactionary countries of the region, especially Saudi Arabia, had announced that they are trying to bring insecurity into Iran."

Mohsen Rezaei, the former I.R.G.C. chief commander and current secretary of Iran’s Expedience Discernment Council, also warned Israeli Prime Minister Benjamin Netanyahu that Tehran possessed more powerful missiles with longer ranges than ones used against the Islamic State in Syria. “Mr. Netanyahu, this was just the message of Zolfiqar [missile]; the message of Shahab and Zelzal [missiles] is much stronger!” he tweeted. He later deleted the message.

The timing and location of the strikes were also significant. As inferred from the Iranian leaders’ statement, the missile strikes were meant to tell Washington that Tehran was not deterred by new sanctions. The missile attacks came just days after the U.S. Senate passed a legislation that would impose new sanctions against Iran’s missile program. Moreover, the oil-rich Syrian province of Deir Az Zour is expected to be at the center of post-Islamic State power play between pro-Syrian government forces and Syrian rebel groups backed by the United States and regional countries.