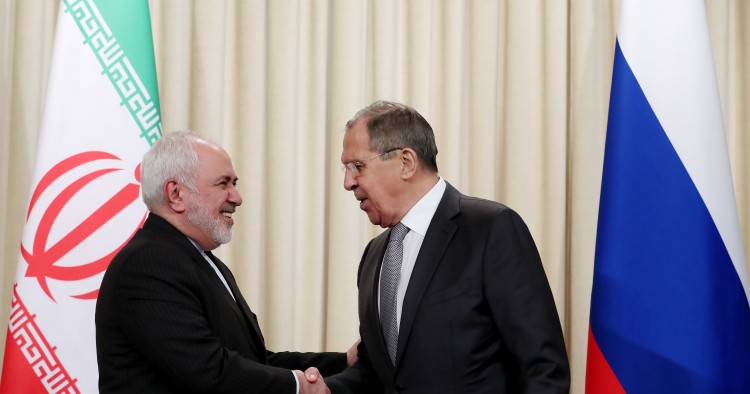 The relationship between Iran and Russia has been strengthened by the rising tensions between Tehran and Washington since Donald Trump took office, and there is no doubt that Iran views Russia as one of its closest allies. The Iranian foreign minister, Mohammad Javad Zarif, has traveled to Moscow some 28 times during his tenure, and has stated that relations between the two countries have never been better.

Russia is a key player in Iran’s efforts to combat U.S. aspirations in the Middle East and has broad support across the political spectrum in Tehran. Not surprisingly, the joint Iranian-Russian-Chinese naval drill in the Indian Ocean and Gulf of Oman in December 2019 was hailed by both the “reformist” camp and the “conservative” camp within Iran.

According to Tehran, Russia and Iran share the same views on various strategic issues in the region, and that serves as a strong motivation to expand its military partnership with the Russians. The feeling is mutual as well: Russia has supported Iran on a variety of important issues and it also views Tehran as an important ally. Russia has vetoed several resolutions against Iran in the UN Security Council, opposed U.S. pressure to include Iran’s missile program as part of the Joint Comprehensive Plan of Action (as the 2015 Iran nuclear deal is officially known), and supported Iran’s request to join the Shanghai Cooperation Organization (SCO), a regional economic and security alliance.

Collaboration between Iran and Russia in the political, economic, and military arenas has increased substantially in recent years. The two are also cooperating strongly on intelligence and security matters, as has been observed in Syria and was made clear by the so-called Iran cables, which were recently published by The Intercept and The New York Times.

In the economic field, Russia is trying to help Iran weather the U.S.-enforced embargoes against it and has been hailed by Iran for its assistance. In doing so, however, the Russians are also securing their own financial interests in the Middle East. To this end, the Russians are very keen to join the Instrument in Support of Trade Exchanges (INSTEX), a new financial mechanism that was created initially by the UK, France, and Germany to maintain trade with Iran and bypass U.S. sanctions. Other current members include Denmark, Sweden, Finland, the Netherlands, and Belgium. Iran and Russia are also reportedly close to an agreement on using their national currencies rather than the U.S. dollar in their bilateral trade.

Despite these areas of collaboration, Iran is well aware that Russia is not driven by a desire to see an overly strong and independent Iran. The Mashregh News agency, which is close to the Iranian intelligence apparatus, has said that Iran must not be dependent on countries like Russia for support in its military programs, pointing to Russian reluctance to sell its S-300 long-range surface-to-air missile system to Iran. In a recent article on the front page of the reformist newspaper Shargh, and echoed by the state-owned Iranian Students News Agency, it was stated that both Russia and China want a weak Iran and that membership in the SCO is not necessarily in Iran’s interest. The author, a professor at the University of Tehran, concluded that being too close to the “East” (meaning Russia) is as dangerous as being too close to the “West” (meaning the U.S. and Europe).

Interestingly, Iran believes that it will have the support of the Russians in the event of a war with the U.S. But even then, Russia would be primarily interested in securing its own interests. In an article published on reformist news website Entekhab, based on reports from the Russian media, it was stated that in the case of a war between Iran and the U.S., Russia will not only occupy Georgia to stop the U.S. from establishing military bases in the area, but will also occupy the other countries in the Caucasus. The conservative Baztab news website, which has close links to Mohsen Rezaei, a former senior commander of the Islamic Revolutionary Guard Corps, also citing Russian media, wrote that even though the Russians have no desire to get involved in a war between Iran and the U.S., they will ultimately side with Iran.

Perhaps partly because of Iran’s fears that Russia will not remain committed to their alliance, Tehran is getting increasingly close to China as well, not least in discussing military collaboration. Closer cooperation between Iran and China will definitely unsettle Russia, and perhaps give Tehran an advantage in their future discussions and negotiations. For Iran, however, a triangular alliance with Russia and China would be the ultimate victory against U.S. alliances in the region. In regard to the recent joint Iranian-Russian-Chinese naval drill, the Iranian hardline newspaper Kayhan wrote, “The alliance of Iran, China, and Russia is the formation of a ‘new maritime power triangle’ and a display of power to Americans and their European and regional allies.”

Iran and Russia may both have a strong strategic interest in reducing U.S. influence in the region, but there are no guarantees that the alliance between them is a permanent one. While there are formally no anti-Russian organizations or entities in Iran, Tehran is very well aware of the fragility of alliances in international politics. At least for now, however, Iran will not only continue to have a close partnership with Russia, but it will also likely seek to deepen its collaboration with Moscow. At the same time, Tehran is in need of new allies, which is why it will look to increase its cooperation with China as well.

Ardavan Khoshnood (PhD) focuses on Iranian foreign policy, the Iranian Ministry of Intelligence, as well as the Islamic Revolutionary Guard Corps. He is a guest lecturer of Offender Profiling (including Political Profiling) at Malmö University. He is also a senior fellow at Lund University. The views expressed in this article are his own.