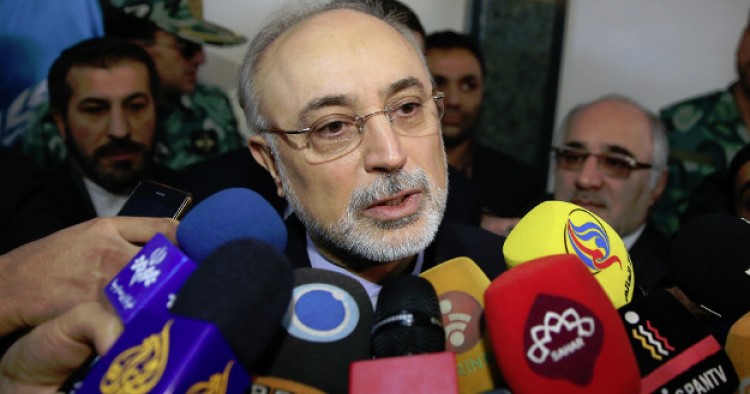 The head of the Atomic Energy Organization of Iran (A.E.O.I.) has said that President Donald Trump is trying to cancel the nuclear deal Tehran signed with world powers two years ago. He claimed that the latest U.S. sanctions violate the nuclear accord and also accused the Trump administration of pressuring the International Atomic Energy Agency (I.A.E.A.) to declare that Iran is in breach of the agreement. The top Iranian nuclear official said that the Islamic Republic will not be the first party to violate the agreement, but stressed that it will not accept any U.S. requests beyond the terms of the nuclear agreement and the Non-Proliferation Treaty (N.P.T.) Additional Protocol.

Separately, Salehi told reporters in Tehran on Sunday that a ministerial meeting between Iran and six other signatories of nuclear deal might be held in New York in September to discuss the implementation of the Jointed Comprehensive Plan of Action (J.C.P.O.A.).

Iran’s Foreign Ministry also called on European powers to confront “unilateral policies” of the United States regarding the nuclear deal.

Comment: The I.A.E.A. is set to release an inspection report on Iran’s nuclear activities within days. All previous I.A.E.A. reports since have certified that Iran has largely complied with the nuclear agreement, and the upcoming report is expected to be not much different. One major point of friction between Tehran and Washington, however, will continue to be the inspection of Iran’s military facilities.

During her trip to the I.A.E.A. headquarters in Vienna last week, U.S. Ambassador to U.N. Nikki Haley discussed Iran’s compliance with I.A.E.A. chief Yukiya Amano. Speaking after the meeting, Haley particularly focused on military sites in Iran which the international nuclear watchdog has not inspected yet. "As good as the IAEA is, it can only be as good as what they are permitted to see," Haley said. "There are also numerous undeclared sites that have not been inspected yet," Haley said. "That's a problem." She continued: "I have good confidence in the IAEA, but they are dealing with a country that has a clear history of lying and pursuing covert nuclear programs.”

Iranian leaders have ruled out the inspected of the country’s military sites.

Furthermore, as the Trump administration is ratcheting up economic sanctions on Iran, Iranian officials are reaching out to potential allies around the world to minimize the impact of U.S. sanctions. Tehran, in particular, is trying to drive a wedge between the United States and major European powers. Iran’s Foreign Minister Javad Zarif have recently held meetings with European leaders to make sure European powers do not side with Washington if the Trump administration cancels the nuclear deal.

On June 27, for example, Iran’s Foreign Minister Javad Zarif blasted the Trump administration’s new U.S. sanctions on Iran in a meeting with his German counterpart Sigmar Gabriel in Berlin. The foreign minister of Germany, which is a signatory to the Iran nuclear accord, agreed with Zarif that the deal should be fully implemented by all parties involved. "We stand behind this agreement and want to support all the parties in their efforts to fulfill it," Gabriel said. "As the Federal Republic of Germany and as Europeans we would oppose any attempts to call it into question."

When French President Emmanuel Macron won the elections in France, President Hassan Rouhani congratulated him and urged the new government in Paris to play a more active role in the implementation of the nuclear agreement. According to the Iranian media, Rouhani praised the French government’s “influential” role in making the nuclear accord possible almost two years ago, whereas he criticized the U.S. for not honoring its commitments.