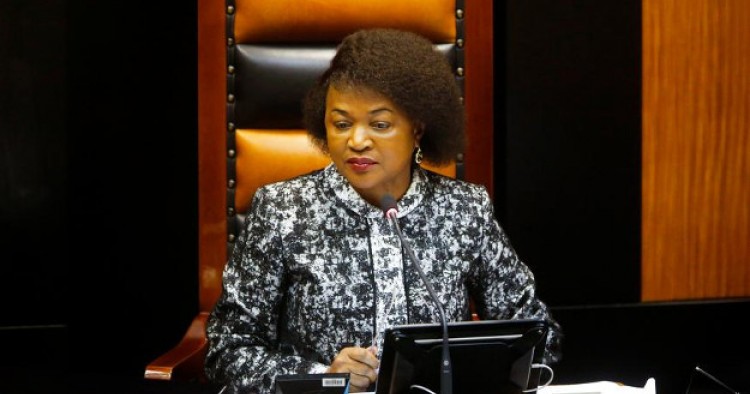 Top Iranian officials have called for cultivating comprehensive ties with South Africa, particularly in banking sector. In a meeting with visiting speaker of South Africa’s parliament Baleka Mbete this weekend, President Hassan Rouhani said Tehran is keen to boost its diplomatic and economic relations with the African nation. “Iran and South Africa can make valuable efforts for international peace and stability as well as for developing countries’ interests by cooperating at international fora.” According to the Iranian media, Rouhani plans to visit South Africa in the near future.

Iranian Foreign Minister Javad Zarif echoed a similar wish and told Mbete that “Iran can be a reliable partner for South Africa in the region.” In a separate meeting with her Iranian counterpart Ali Larijani, the top South African lawmaker also stressed that her country supports Iran’s accession to BRICS – the association of five major emerging economies: Brazil, Russia, India, China and South Africa.

The visiting South African delegation discussed a wide range of bilateral issues with Iranian officials in Tehran, including setting up a joint commission to boost cooperation, Rouhani’s trip to South Africa, the nuclear deal, and regional affairs, particularly the Israeli-Palestinian issue.

One key agenda item was closer banking ties. Valiollah Saif, the head of the Central Bank of Iran, said expanding banking relations with South Africa will top President Rouhani’s agenda during his trip to the African country. Mbete, according to Iranian media, also agreed that the nuclear deal has prepared the ground for the two countries to “normalize banking relations” and emphasized that such a move would further cement economic ties between Iran and South Africa. Several Iranian banks are planning on opening branches in South Africa.

Comment: In the past decade, the Islamic Republic has consistently sought to expand its influence in Africa. Former Iranian president Mahmoud Ahmadinejad made significant efforts to expand Tehran’s relations with African nations to offset Iran’s increasing isolation by the West. While the Rouhani administration’s priority has been to improve Iran’s relations with the West, it has not forgotten Africa and sees it as an important region for Iran’s soft power and hard power strategies. In a meeting with his Sierra Leonean counterpart in May, Zarif stressed that Africa was of paramount significance for Iran in the political, economic and cultural terms.

By building closer ties with African countries, Tehran hopes to gain their support in the United Nations and other international and regional platforms. As Iran is seeking to become a major exporter of small arms, African countries could also be a lucrative market. In addition, Tehran may hope that its expanding ties with African countries would serve its naval expansion in the future. And as Washington is expected to impose more sanctions on Iran in the near future, Tehran is trying to bolster its financial and economic relations with other countries to minimize the impact of U.S. sanctions.