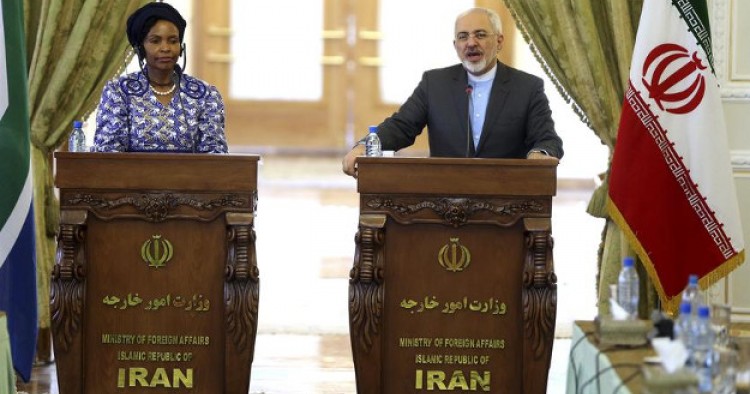 On Monday, Iran’s Foreign Minister Javad Zarif participated in the 13th Iran-South Africa Business Forum held in Pretoria, the Iranian media reported. Speaking at the event, the Iranian foreign minister called for expansion of economic and trade ties between the two countries and urged the South African government to resume banking relations with Iran. “This [banking] cooperation has been established with many countries around the world and we hope that South Africa also support the resumption of banking relations within the framework of the international nuclear agreement so that we can take a major step in boosting relations between the private sectors of the two countries.” Zarif praised South Africa for maintaining close ties with Iran over the past two decades and supporting Tehran’s nuclear negotiations with world powers that culminated in a nuclear agreement two years ago. Therefore, Iran will give priority to South Africa to benefit from Iranian markets, he pointed out. “The Islamic Republic of Iran places no restrictions in expansion of comprehensive relations with South Africa. The doors of the Islamic Republic of Iran are open to South African state-run companies as well as the private sector. Also, my country’s infrastructural capacities such as railroads, roads and ports are at the service of South Africa to gain access to Central Asia, the Caspian Sea, Russia and Eastern Europe.”

Comment: Heading a high-level delegation, Zarif arrived in the administrative capital of South Africa on Sunday to discuss ways to expand relations between the two countries. The top agenda item for the Iranian delegation appears to be persuading the South African government to resume banking relations with Iran. As the Trump administration is ratcheting up sanctions on Iran and is threatening to undo the nuclear agreement, Tehran is proactively trying to establish banking cooperation with countries around the world to minimize the impact of new U.S. sanctions and keep the country’s fledgling economy afloat. Zarif is scheduled to travel to Uganda and Niger next.

In a meeting with visiting speaker of South Africa’s parliament Baleka Mbete last month, President Hassan Rouhani said Tehran is keen to boost its diplomatic and economic relations with the African nation. “Iran and South Africa can make valuable efforts for international peace and stability as well as for developing countries’ interests by cooperating at international fora.” According to the Iranian media, Rouhani plans to visit South Africa in the near future.

Valiollah Saif, the head of the Central Bank of Iran, said expanding banking relations with South Africa will top President Rouhani’s agenda during his trip to the African country. Mbete, according to Iranian media, also agreed that the nuclear deal has prepared the ground for the two countries to “normalize banking relations” and emphasized that such a move would further cement economic ties between Iran and South Africa. Several Iranian banks are planning on opening branches in South Africa.

Furthermore, the Islamic Republic has consistently sought to expand its influence in Africa over the past decade. Former Iranian president Mahmoud Ahmadinejad made significant efforts to expand Tehran’s relations with African nations to offset Iran’s increasing isolation by the West. While the Rouhani administration’s priority has been to improve Iran’s relations with the West, it has not forgotten Africa and sees it as an important region for Iran’s soft power and hard power strategies. In a meeting with his Sierra Leonean counterpart in May, Zarif stressed that Africa was of paramount significance for Iran in the political, economic and cultural terms.

In addition, Tehran may hope that its expanding ties with African countries would serve its naval expansion in the future.