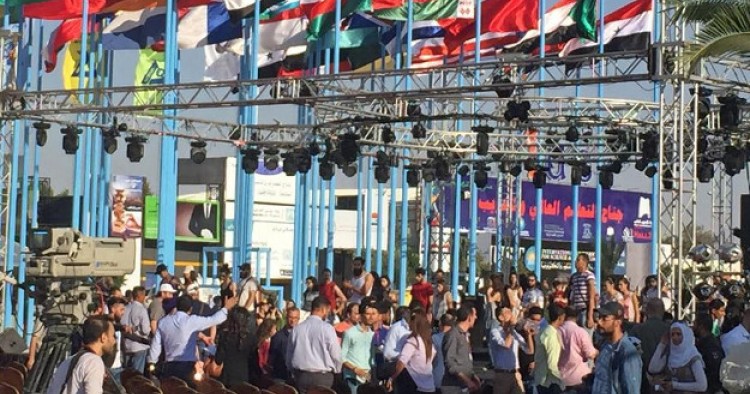 An Iranian official said on Thursday that his country is ready to meet Syria’s all trade needs and emphasized that Iranian companies are eager to help the war-torn country’s reconstruction. In a meeting with Syria’s Minister of Economy and Foreign Trade Mohammad Samer al-Khalil in Damascus, the deputy head of Iran Chamber of Commerce, Industries, Mines and Agriculture (ICCIMA), Hossein Selahvarzi, called on the Syrian government to assign a special envoy to arrange for the implementation of a free trade agreement between the two countries.

Selahvarzi is in Damascus to attend the 59th Damascus International Fair. On Thursday, the Syrian government opened the country’s first international trade fair in five years, an event which Syrian officials celebrate as a victory for the embattled regime. According to Iranian media, government representatives and companies from 43 countries are attending the 59th Damascus International Fair, including from China, Russia, Egypt, Germany, Britain, and France, among others. Iran is reportedly the largest participant, with 30 major Iranian companies attending the event.

Comment: While the Syrian war is far from over, Tehran has already stepped up efforts to play a major role Syria’s rebuilding and become the Arab country’s leading trade partner.

In June, Iranian Ambassador to Damascus Javad Torkabadi said Iran is ready to help Syria’s reconstruction. “Many companies in Iran are ready to help Syria in the housing and reconstruction fields rendering their best services now that victory is in sight in Syria after a protracted battle,” he was quoted as telling Syrian Minister of Housing Hussein Arnus at a meeting in Damascus. The Syrian minister, on his part, reportedly said his country needed Iran’s help in “infrastructural projects.” Torkabadi also met with Syria’s Minister of Agriculture Ahmad al-Qadri to discuss the implementation of bilateral agreements on agricultural projects the two countries had signed earlier.

Separately, Alaeddin Boroujerdi, the chairman of the Iranian parliament’s National Security and Foreign Policy Committee, also said in June that Iran was keen to share its reconstruction expertise with the Syrian government. “Iran will provide assistance in rebuilding Syria by sharing earlier experiences in reconstruction carried out after the Imposed War against Iraq,” he told Mohammad al-Ammouri, the secretary general of Syria’s Prime Minister Office. The Syrian official reportedly welcomed Iran’s offer and stressed that joint economic investments and presence of Iranian firms in Syria will help the war-torn nation’s reconstruction and lead to deeper relations between the two countries.

The Syrian government is heavily indebted to Tehran for its military support over the past six years, as the Islamic Revolution Guards Corps (I.R.G.C.) and its proxies have played a significant role in shifting the tide of war in favor of the Bashar al-Assad regime. Although the Syrian war is far from coming to an end, the I.R.G.C. has already stepped up efforts to dominate Syria’s economic sector and expand Iran’s soft power influence over Syria.

In January, Tehran signed several agreements with Damascus, including building a mobile phone network in Syria as well as mining and agricultural projects. The agreements were signed during a visit to Tehran by a high-level Syrian delegation led by Prime Minister Imad Khamis.

There is little doubt that companies owned by or affiliated with the I.R.G.C. will carry out these projects in Syria. The I.R.G.C. already controls much of Iran’s telecommunications sector, and building Syria’s mobile network will also provide the I.R.G.C. and its elite Quds Force with a valuable intelligence and surveillance tool. The projects in Syria – as in Iraq, Afghanistan and Lebanon – will also bring added revenues to the I.R.G.C.