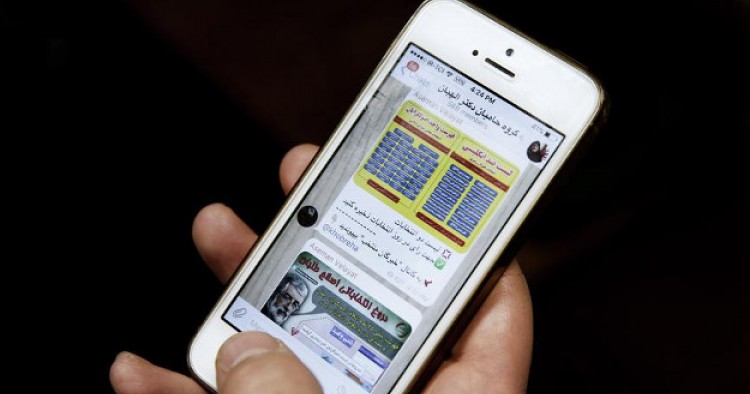 In the latest sign that the Iranian regime is set to further increase Internet restrictions, the office of Ayatollah Ali Khamenei said today that the Supreme Leader is leaving Telegram, the most popular messaging service in Iran used by more than a half of the country’s 80 million population. All government agencies have reportedly been prohibited from using Telegram, and today’s announcement indicated that the government plans to shut down the messaging app in the near future. After Khamenei, several senior government agencies and officials suspended their accounts, including Vice President Eshaq Jahangiri and a number of lawmakers. The news from Khamenei’s office came after Russia said it had started blocking Telegram because the app company had refused Moscow’s request to share users’ data. Iran’s demand is similar: all foreign apps should keep their servers inside Iran or they will forfeit the right to operate in the country.

There have been conflicting media reports and official statements about the government plan to ban Telegram and other foreign messaging and social media services. But today’s announcement by Khamenei’s office made it clear that the Islamic Republic will block Telegram. The statement added that before executing the official plan stop the use of Telegram, the Supreme Leader stopped using Telegram to “safeguard” Iran’s national security and “remove the monopoly of Telegram messenger”.

Some Iranian outlets reported that all government agencies are now prohibited from using Telegram, and ordinary Telegram users this morning complained about a temporary disruption in the service as well. But Mohammad-Javad Azari Jahromi, the minister of information and communications technology, said the ministry has not received any order to start filtering Telegram. “The policy of filtering is not the solution by itself,” he added.

Authorities in Iran say Telegram and other foreign apps can operate in Iran only if they agree to station their servers inside the country – a request unacceptable to all major international social media and messaging companies.

Fars News Agency, a Revolutionary Guards mouthpiece, today advised its readers to back up all important information they may have on Telegram and provided instructions on how to save and transfer their information to other apps.

Islamic Republic leaders have long been suspicious about foreign apps but their efforts to encourage Iranians to shun those apps in favor of domestic ones have yielded no tangible results. The Ministry of Intelligence has approved of five domestic apps and has encouraged Iranians to use them, but very few people have switched to domestic services.

The Iranian Intelligence Ministry hopes that a new legislation protecting Iranians’ cyberspace privacy will encourage more users to shift to domestic applications and reduce the government cost of filtering Telegram. A few days ago, Khamenei called on government authorities to respect citizens’ privacy, calling any breach of their private life “religiously prohibited.” But such statements and legal measures would do little to assuage Iranians’ concerns about the deep state spying on their daily lives. Therefore, despite the latest restrictions, Iranians will continue circumvention tools to use foreign apps that are encrypted and keep them safe from the government’s predatory eyes. Some Iranians who have used domestic apps have complained that these services are linked with the country’s security agencies.

Another problem for the Iranian regime is that domestic apps are too underdeveloped and poorly resourced to compete with foreign services. iPhone has also removed Iranian apps, including Soroush, from its App Store in order to not violate US sanctions.

The Iranian people are also fed up with their leaders’ hypocrisy about the use of foreign apps. Khamenei and other senior officials actively use apps such as Twitter, Facebook, and Instagram while they have barred the people from using some of them. Khamenei’s Telegram account had more than one million members until today. President Hassan Rouhani and Foreign Minister Javad Zarif actively use Twitter to advance their policies, whereas Twitter, similar to Facebook, is banned in Iran.

Since antigovernment protests engulfed Iran in late December and early January this year, Islamic Republic authorities have intensified Internet crackdown in an effort to block the Iranian people from access to information and means of communication. Telegram has been a primary target. During the protests, the Iranian government temporarily blocked Telegram and Instagram because they were used by some protesters to share and access information and organize protests.

The use of social media apps had also played a key role in the 2009 protests and Iranian authorities believe that these applications pose an even bigger threat to the regime now as nearly 50 million Iranians currently possess smartphones, compared to just a million in 2009.

Iranian leaders are also worried that foreign powers can exploit popular anger inside Iran to foment unrest and weaken the regime. Last week, the Revolutionary Guards’ intelligence department briefed the parliament about Telegram, claiming that the application poses national security threats to Iran because foreign adversaries are using it to spread propaganda against the Islamic Republic. “The cyberspace is at the service of America and the Zionist regime and people should be rescued from its grip.” Sayyed Hossein Naqvi Hosseini, the speaker of the National Security and Foreign Policy Committee at the parliament, concurred. He called on the Ministry of Information and Communications Technology to expedite the creation of “national cyberspace networks” and support domestic applications.

Last year, Brigadier General Gholam Reza Jalali, the head of Iran's Civil Defense Organization, warned that Tehran’s foreign enemies are increasingly tapping into “social media and personal smart phones to carry out espionage operations against people.” According to Jalali, the latest smart phone technologies are so sophisticated that unsuspecting citizens in Iran can become collectors of information for foreign intelligence services.

Over the past one year, Iran has intensified Internet crackdown. In the run-up to last year’s presidential elections, authorities blocked several instant-massaging apps. Iran’s Deputy Police Chief announced that the country’s Cyber Police had increased its presence and activity in major population centers across the country to monitor the cyberspace and prevent cybercrimes. “The Cyber Police’s specialized labs have simultaneously been inaugurated in 16 provinces of the country through a video conference. At present, the Cyber Police’s advanced labs are active in 26 provinces of the country. By establishing these labs, security in the cyberspace will be maintained and the crime rate in this field will decline,” Brig. Gen. Eskandar Momeni, the deputy head of the Law Enforcement Force of the Islamic Republic of Iran, said.

Since Internet activism was instrumental in the mobilization of the 2009 protests, the Iranian regime established new government agencies to tighten its control over the internet. In 2011, the government created the Cyber Police department; and a year later, Khamenei ordered the establishment of a new government agency, called Supreme Council of Cyberspace, in an effort to step up the country’s crackdown on Iranian internet users. Some Iranians use VPN software to circumvent the government’s restrictions and monitoring, but it carries risks.

In addition to measures taken by the country’s law enforcement forces, the Basij paramilitary organization has also taken an increasingly active role in monitoring and controlling the country’s cyberspace. Last year, Iran’s Deputy Attorney General Abdolsamad Khoramabadi announced that his office had tasked the Basij organization to take a leading role in cracking down on the country’s cyberspace. “About 18,000 people [Basij members] voluntarily monitor the cyberspace and report any violations by websites and [online] social networks to the office of the Attorney General,” he said.