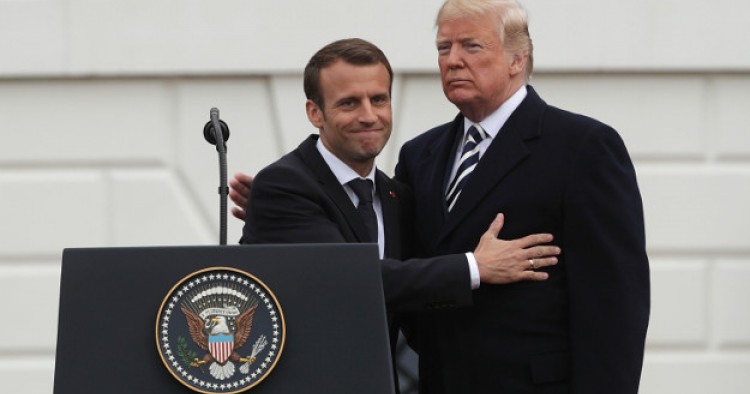 On Tuesday, President Donald Trump and his French counterpart Emmanuel Macron signaled that they will work on a “new deal” to supplement the 2015 Iran nuclear agreement and address the Islamic Republic’s ballistic missile program and destabilizing role in the region. Tehran’s response was loud and clear: The Islamic Republic will defy Western pressure and will not renegotiate the nuclear deal or make any compromises over its defense programs and regional posture. Dismayed by apparent cooperation between European countries and Washington, Tehran threatened to resume high-level nuclear enrichment and leave the Treaty on the Non-Proliferation of Nuclear Weapons (NPT). Iranian leaders also sought to court Russian and Chinese support to block US-European efforts to amend and strengthen provisions within the Joint Comprehensive Plan of Action (JCPOA), the nuclear accord Tehran signed with world powers in July 2015. The increasing Western pressure is also fueling factional fighting inside Iran, as hardliners blame the Rouhani government for signing the JCPOA with the West at the expense of Iran’s national security interests.

In January, Trump reluctantly continued sanctions relief for Iran but warned that he would “terminate” the landmark nuclear deal unless US Congress and European powers come up with a plan to fix the accord’s loopholes within the next four months. "This is the last chance. In absence of such an agreement, the United States will not again waive sanctions in order to stay in the Iran nuclear deal,” the he cautioned. On May 12, Trump faces the sanctions waiver deadline yet again and has to decide whether to stick to the nuclear deal or leave it.

While all indications were pointing to a unilateral US withdrawal this May, Trump hinted at yesterday’s press briefing with the French president that he is open to keep the deal as long as European powers agree to work with Washington to strengthen the existing accord. "I think we will have a great shot at doing a much bigger, maybe, deal," Trump said, emphasizing that any new agreement need be built on "solid foundations". He added that the JCPOA should have covered Iran’s role in Yemen, Syria and the broader Middle East.

While Macron’s pledge that France and other European powers will work closely with Washington to draw up a new deal may have convinced Trump not to scrap the existing deal next month, the uncertainty surrounding the fate of the JCPOA will most likely linger on. First, there is a lack of consensus within Europe on cooperating with Washington to pressure Iran. France, Germany and Britain – the three JCPOA signatories – even failed to persuade other European countries such as Italy and Sweden earlier this month to introduce new sanctions against Iran’s missile program. Germany has also not indicated that it would support the idea of a “new deal”. German Chancellor Angela Merkel will discuss the JCPOA with Trump on Friday, and it remains to be seen if she will support Macron’s proposal and tough rhetoric on Iran.

Furthermore, China and Russia, the other signatories of the deal, strongly support the Iran deal and oppose any attempts to amend it. But most importantly, Iran has ruled out renegotiating the JCPOA or making any compromises on its ballistic missile program or regional role.

The response from Iran’s both civilian and military leaders to a potential “new deal” was one of defiance. President Hassan Rouhani said today “not a single word will be added to or removed from the agreement.” The Iranian president warned the US and its allies of “severe consequences” if the JCPOA falls apart. Ali Larijani, the speaker of Iranian Parliament, echoed a similar view. “The defiant Iranian nation is not scared of Trump’s ludicrously diplomatic maneuvers. We will respond to America at the appropriate time.” Iranian Defense Minister Amir Hatami said if Washington cancels the JCPOA, his ministry will “execute its own plan at the appropriate time.”

Several other Iranian leaders also talked about drastic measures Tehran is considering if US leaves the deal or try to change its terms. Ali Shamkhani, the secretary of Iran’s Supreme National Security Council, said Iran would leave NPT and resume its nuclear activities it had curbed as part of the JCPOA. Just before leaving Tehran for Russia on Tuesday, Shamkhani said the Atomic Energy Organization of Iran (AEOI) has “surprising” responses for Washington and its allies. AEOI head Ali Akbar Salehi has repeatedly warned that Tehran will resume high-level enrichment if the JCPOA is annulled.

Earlier today, Shamkhani held meetings with top Russian officials to discuss the JCPOA and Syria. Moscow has said that it will not side with the US and Europe to amend the JCPOA. And speaking at a security conference in the Russian city of Sochi, Shamkhani reiterated “any agreement between Europe and America on the JCPOA’s future and Iran’s nuclear program is meaningless in Iran’s view.” Shamkhani, who is a top advisor to Supreme Leader Ali Khamenei and former Revolutionary Guards commander, also stressed that Tehran would not agree to extending nuclear enrichment restrictions imposed on Iran within the JCPOA.

When Trump took office in January 2017 and threatened to cancel the Iran deal, Tehran counted on Europe to dissuade the new US president from leaving the deal. And even if Washington walked away from the accord, the Rouhani government hoped to be able to drive a wedge between the US and Europe and “isolate” Washington. Rouhani and Foreign Minister Javad Zarif had hinted that Tehran would be willing to stick to the deal even if Washington left it provided that European countries continued to do business with Iran and opposed US sanctions.

But as France, Germany and Britain are working with Washington to restrict Iran’s missile activities and regional ambitions, the narrative in Tehran has changed. Zarif repeatedly mentioned during his latest trip to New York that the Islamic Republic will certainly leave the JCPOA if Washington reinstates nuclear-related sanctions.

The IRGC and hardliners in Iran are exploiting the heightening tension over the JCPOA to score political points against the Rouhani government. They have been warning the Rouhani administration also not to rely on European countries, arguing that Europe would ultimately side with Washington rather than Tehran. They now feel vindicated and are set to blame the Rouhani government for any consequences of escalating Western pressure. Tasnim News Agency, which is affiliated with the Revolutionary Guards, today accused the French government of “continuing to violate and shaken the four pillars of JCPOA.”

For Rouhani, the success of the nuclear deal defines the legacy of his presidency and determines the future of his ambition to potentially become Iran’s next supreme leader. Thus, despite tough rhetoric by the president and his cabinet ministers, the Rouhani government will do its utmost to save the Iran nuclear deal. But regardless of the fate of the nuclear deal, Rouhani is set to be facing increasing pressure both at home and from abroad in the near future.