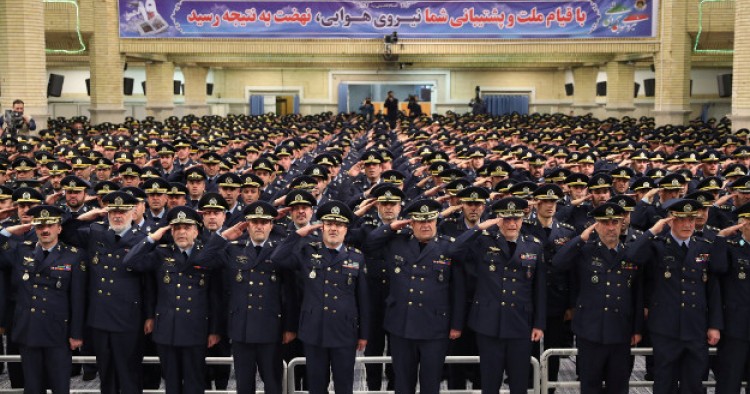 The deputy chief of Iran’s armed forces has warned that the Islamic Republic will take action against U.S. interests in the Middle Eastern region in retaliation to the Trump administration’s regime change remarks. “We’ll respond to American officials’ delirious remarks in practical fields,” Brigadier General Massoud Jazayeri said. “They often repeat their wishes about Iran in a childish manner. This is at a time when Islamic Republic of Iran, according to its defined goals and policies, continues efforts to oust foreigners from the region and has no hesitation to achieve this sacred objective,” he added. He further stressed that the Islamic Republic is not concerned about the Trump administration’s “ludicrous dreams” of regime change in Iran. “A country that relies upon its developed and revolutionary people and society will not be impacted by propaganda and psychological operations or the enemies’ weapons,” he emphasized. Referring to the latest U.S. sanctions on Iran, the Iranian military official said: “We have plans that will inflict a lot of damages to America.”

Comment: Remarks by U.S. Secretaries of State and Defense Rex Tillerson and James Mattis about the need for regime in Iran have provoked angry reactions in Tehran. Earlier this week, Iran’s Defense Minister Hossein Dehghan condemned Mattis’ comments as "interventionist" and claimed they violated all principles of international law. “Arrogant behavior, lack of attention to the power of nations, and ignorance about historical events and consequences of such statements have deprived such people of common sense. These remarks are similar to delirious talk by an ill person with fever,” he lamented. His remarks came after Mattis in an interview said regime change in Iran will be necessary before Washington and Tehran could significantly improve their relations. “Until the Iranian people can get rid of this theocracy, these guys who think they can tell the people even which candidates they get a choice of. It’s going to be very, very difficult,” he said.

Last month, U.S. Secretary Rex Tillerson’s also said at a Congressional hearing that “our policy towards Iran is to push back on this hegemony, contain their ability to develop, obviously, nuclear weapons and work towards support of those elements inside of Iran that would lead to a peaceful transition of that government. Those elements are there, certainly as we know.”

Tillerson’s statement was interpreted inside Iran as Washington’s new policy of regime change in the Islamic Republic. Iranian Foreign Minister Javad Zarif took to Twitter to denounce his American counterpart’s comments. “Before reverting to unlawful & delusional regime-change policy towards #Iran, US Administration should study and learn from history,” Zarif tweeted. He added that the “debacle” of the 1953 CIA-backed coup against Iran’s democratically elected Prime Minister Mohmmad Mosaddegh and the success of the 1979 Islamic Revolution showed that “Iranian people are impervious to outside attempts to decide their destiny.” He continued: “For their own sake, US officials should worry more about saving their own regime than changing Iran’s, where 75% of people just voted.”

The war of words between U.S. and Iranian officials is the latest indication of worsening relations between Tehran and Washington and indicates that Washington and Tehran are moving toward more confrontation rather than cooperation in the near future.