The Iranian Army: Tasks and Capabilities 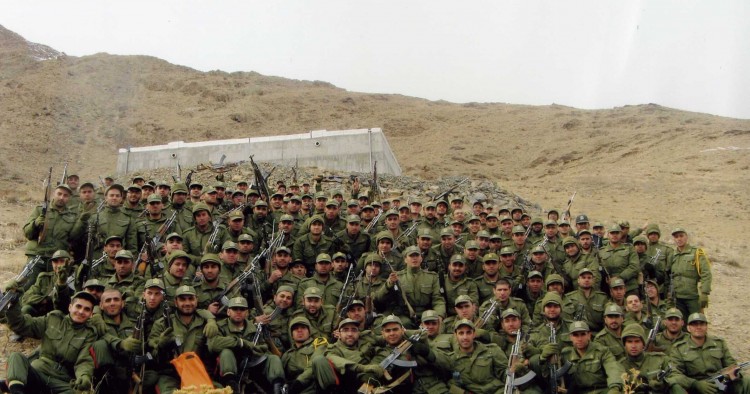 Much attention has been given to the IRGC’s asymmetric defense capabilities, its role in Iraq’s post-2003 insurgency, and its alleged hold over the Strait of Hormuz, but there is little scrutiny in open source literature on the significance of the Iranian Army (Artesh) to Iran’s national security.

As the EU and the United States continue to contain Iran in military, economic, and political terms in order to sway the leadership to accept a mutually acceptable settlement on the nuclear program, Iran’s Army continues to underwrite the country’s national security, checking both threats from within and without.

As the popular unrest that followed the presidential elections in 2009 was gaining momentum, Iran’s internal balance of power depended on the position of the armed forces. However, unlike in 1979 (or Tunisia and Egypt in 2011), the Army never defected, thus allowing the IRGC and the Basij militia force to defend their economic and political stake in the country and crush the Green opposition movement.

Created as the Imperial Army under the direction and influence of foreign advisers in the 19th and 20th centuries, the Artesh had become the world’s fifth-strongest army by 1979 and constituted a significant pillar in underwriting the Shah’s power projection in the region. Ayatollah Khomeini’s establishment of the IRGC as an ideological vanguard of the Islamic Revolution served to replace the monarchist with a revolutionary Islamist ethos. Since the violent crackdown against the opposition in Iran, which was largely undertaken by the IRGC as well as other elements of the security and intelligence establishment, the IRGC has moved on to be one of the most important power brokers in the country. Informed by ideological zeal as much as economic interests, many observers see the IRGC as turning Iran into a “praetorian state.”[1]

Nonetheless, the Artesh has remained an important element in Iran’s armed forces. It was only after the revolutionary leadership ceased its purges of the Army and began to retrain the newly founded IRGC in the conduct of conventional, formation-based tactics and along with the Army that Iran was able to repel Saddam Husayn’s advances in the early 1980s.[2]

According to Article 143 of the Constitution, the task of the Iranian Army is to safeguard the independence and territorial integrity of the country, as well as the order of the Islamic Republic. While concerted efforts to Islamize the Army failed to instill revolutionary zeal, they ensured that the Army, largely comprised of conscripts, remains loyal to the regime.  Beyond the need to maintain popular acquiescence at home and conscious of US capacities to deploy significant military power against the Islamic Republic, the Army remains a main element of Iran’s defense posture.

As the Army’s leadership claims that it has restructured its fighting capabilities and resources in order to fight in conventional as well as asymmetric theaters, the Army continues to play an important role in securing borders as well confronting what the regime considers to be a Kurdish insurgency emanating from Iraq as well as a homegrown terrorist threat in the region of Sistan va Baluchistan.[3]

Since the US invasion of Afghanistan in 2001 and Iraq in 2003, Iran’s conventional military forces, particular infantry, mechanized infantry, and armored elements have been deployed along the borders with Iraq, Afghanistan and Turkey. While the Army continues to confront conventional strategic threats along Iran’s borders, it has largely been used in fighting the Kurdish insurgency and in recent years witnessed military operations, ranging from shelling of artillery as well as incursions into Iraqi territory. At least 5,000 military forces (including Basij and IRGC units and the 28th Infantry Division) have been deployed along the common border with the Iraqi Kurdistan region.

In the restive eastern province of Sistan va Baluchistan, a region witnessing considerable ethnic Baluch unrest, the Artesh’s role is also on the rise. In recent years, the militant ethnic Baluch and Sunni group Jundullah has used the momentum of popular dissent against the government and engaged in a campaign of assassinations, bomb attacks, and kidnapping involving civilians but mostly targeting local officials, members of the armed forces, and the police. As the Iranian regime staged large-scale maneuvers in the region, stepped up intelligence cooperation with Pakistan, and increased security along the border, significant Army resources continue to be used. It is evident that the Army’s leadership continues to see the suppression of secessionist movements and the subduing of ethnic insurgencies in the periphery as an important task. However, state-sponsored concerted violence against the opposition and ordinary protesters following the 2009 presidential elections revealed fissures in the officers’ corps of the regular armed forces, indicating that at least some in the top brass differentiate between legitimate political protests and political violence.

Along the 950-kilometer-long border with Afghanistan, over 50,000 IRGC, Army personnel, and border security forces have been deployed to control drug trafficking. According to Iranian authorities, over 3,700 policemen and soldiers have lost their lives and 11,000 have been injured in Iran’s war against drugs. Over 200 tons of opium and heroin are being trafficked from Afghanistan through Iran onto the world market, making Iran the most important transit point for Afghan opiates.

Most importantly, the regular Army remains Iran’s first line of defense. The southwestern region of Khuzestan, which was of great strategic significance during the early stages of Iraq’s invasion of Iran in 1980, hosts a number of armored divisions of the regular army. As Iran remains subject to targeted assassinations, acts of sabotage, and cyber warfare, which it perceives to be covert operations by US and Israeli forces, the country’s security establishment continues to view the threat of a US invasion as a possibility. To that end, significant military resources are based in Khuzestan, including the 92nd Armored Division, equipped with T-72 tanks, as well as units from the 45th Commando Brigade.[4] The Army is also charged with the protection of nuclear facilities and recent Army maneuvers in Qom, Bushehr, and Esfahan simulated WMD attacks against nuclear installations.

Looking at the military balance in the Persian Gulf, it is evident that in quantitative terms, Iran records an impressive number of conventional military hardware. However, given that the armed forces in Iran suffer from systemic atrophy, maintenance issues, as well as war-torn systems and equipment, Iran’s actual war fighting capabilities fall short of the regime’s bellicose rhetoric. While numerous weapons embargos and other sanctions against Iran for almost 30 years have not swayed Iran in any way to meet US and European security demands, it has significantly checked Iranian procurement efforts.

Even though multilateral efforts at military containment led Iran to develop an indigenous military-industrial complex, its military inventory largely consists of obsolete weapons systems purchased before the Iranian Revolution in 1979. Military hardware operated by the army fail to provide the armed forces with the capacity to conduct large-scale conventional offensive operations and as such can only project very limited power against the Gulf States or any other outside forces.[5]

Iran’s main battle tanks (approximately 1,613) are mainly made up of aging Chieftain MK3/5, M47M, M60A1 (British); Soviet-made T-72; North Korean-made T-59 and T-62, and the domestically-made Zulfiqar.[6] The artillery inventory is equally ineffective and fails to sustain any conventional warfare theater. By and large, EU-wide export guidelines, UNSC Resolutions 1737, 1747, and 1803, as well as the entire sanctions regime implemented by the US has largely kept Iran’s army inventory ineffective or non-operational.[7] Recent weapons sales from the EU (particular Germany) to Arab states in the Persian Gulf, coupled with US extended deterrence in the region, keeps the military balance in favor of Gulf monarchies.

In addition to the army’s conventional defense posture, there is an overwhelming human security task assigned to the armed forces as well as to non-governmental organizations. Iran has a large population of victims caused by war and other forms of armed violence, including millions of landmines and other explosive remnants of war (ERW).[8] ERWs continue to threaten civilians, especially on the country’s western and eastern borders. According to the Ministry of Interior there have been 6,765 casualties (2,840 people killed and 3,925 injured) from 1988–2004 and a UN report documents approximately 10,000 casualties as of 2006. [9]

Iranian authorities claim that, during the war, Iraq placed between 12–16 million landmines in Iran, which contaminated an area of over 16,216 square miles.[10] The minefields along the borders of Iraq block access to agricultural land, infrastructure, and undeveloped oil fields. Ironically, while the Iranian government wants to clear the minefields along the Iraqi border, the Army continues to place them along the porous and long Afghan-Iranian border. The effects of landmines continue to impact Iranian civilians, but because of international isolation and the diplomatic stalemate over the country’s nuclear program and other concerns, this important humanitarian issue has received little attention by the international community. Under the authority of the National Mine Action Council, the Army’s Engineer Units, IRGC, and private contractors are largely responsible for clearing minefields. Because of lack of training and lack of modern equipment, over 169 demining personnel were killed since 1999 and over 697 injured. This represents the highest casualty rate in the world.[11] Iran has not acceded to the Convention on Cluster Munitions, nor is it state-party to the Mine Ban Treaty or the Convention on Conventional Weapons. Reluctance to subject Iran to these humanitarian regimes as well as perceived Iranian intransigence on the nuclear talks and related concerns over regional security means that Iran is unlikely to garner much support amongst donor countries to provide much needed international assistance in mine action.

As Iran continues to present itself as guardian to disenfranchised Arabs across the region and as the anti-status quo power, challenging US-allied autocracies, its armed forces remain a crucial asset to that end. So, while the Artesh may constitute an underequipped force, suffering from atrophy and facing superior US forces and better-equipped Arab armies in the region, Iran’s military strengths and realist resolve is still being perceived by its neighbors and the US as a political and strategic threat. As long as the Persian Gulf remains subject to a Cold War security dilemma, Iran will continue to put a premium on military deterrence and brinkmanship as means of securing territorial integrity and security. Even though Iran’s military modernizations and procurement efforts are lagging behind the Persian Gulf Arab monarchies and Israel, there are few in the region willing to pick a fight with Iran.