Iranian-Backed Militias Trying to Link up along Iraqi-Syrian Border 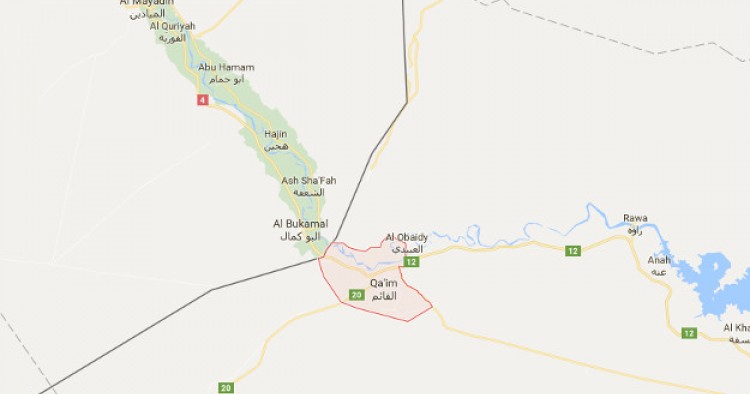 A leader of the Iraqi Popular Mobilization Forces (P.M.F.) announced today that the paramilitary forces will participate in the military operation to capture the town of al-Qaim in western Anbar Province near the Syrian border.  He added that Islamic State fighters are fleeing into Syria. According to Iran’s Fars News Agency, the P.M.F. and Iraqi security forces are 13 kilometers away from the center of al-Qaim. Iranian outlets close to the Islamic Revolution Guards Corps (I.R.G.C.) also report that the Syrian Army and Iranian-backed militia forces are advancing toward the Abu Kamal, a border crossing that borders Iraq near al-Qaim. Pro-Syrian regime forces are reportedly between 45 and 65 kilometers away from Abu Kamal but have reportedly been conducting limited attacks on Abu Kamal by artillery strikes using Iranian Fajr-3 rockets, backed by Russian airstrikes on Islamic State positions.

Al-Alam, a state-run Iranian outlet, also speculates that the United States is trying to push the Syrian Democratic Forces to capture Abu Kamal –  due to its strategic location on the Euphrates River and its proximity to the Iraqi border – even if that leads to clashing with Iranian-backed forces.

Meanwhile, Sofian al-Ithawi, an adviser to the governor of Anbar Province,  told the Baghdad Time News Agency that the P.M.F. should be assigned to hold and secure the Iraq-Syria border to prevent terrorist infiltration. He argued that the Iraqi security forces are unable to police the long shared border between the two countries on their own.

Furthermore, the Chargé d'Affaires of the Iraqi Embassy in Damascus said today that Syrian and Iraqi forces are cooperating to liberate Abu Kamal and al-Qaim and will open a border crossing between the two countries. He added that "the Iraqi army is fighting against the [Islamic State] organization in the town of al-Qaim and, God willing, the two armies will meet at the border."

Comment: Iranian-backed P.M.F. groups appear to be playing a major role in the latest military operation in Anbar Province near the Syrian border. Both al-Qaim and Rawa are strategically important for the Baghdad government and the Islamic State, which uses the border crossing to smuggle weapons and fighters between the two countries.

The area is also significantly important for Iran and its regional proxy militia forces as the control of al-Qaim in Iraq and Abu Kamal border crossing on the Syrian side will allow Iran to complete its project to establish a land corridor to the Eastern Mediterranean. The seizure of al-Qaim will also allow Tehran to move P.M.F. fighters from Iraq into Syria’s Deir Ezzor Province.

The Syrian Army and Iranian-backed militia forces have made advances into the oil-rich Deir Ezzor in eastern Syria, but they still have a long way to go before reaching Abu Kamal. Earlier this month, the commander of the all-Afghan militia unit called the Fatemiyoun Division told Tasnim News Agency, an Iranian outlet affiliated with the Islamic Revolution Guards Corps (I.R.G.C.), that the “resistance fighters” will advance toward Abu Kamal after capturing al-Mayadin in order to  fulfill the promise of Iranian Quds Force Commander Qassem Soleimani. As reports and commentaries in the Iranian press indicate, Tehran is worried that U.S.-backed S.D.F. forces may reach Abu Kamal first, blocking Iran to link up its militia proxies between the two countries.