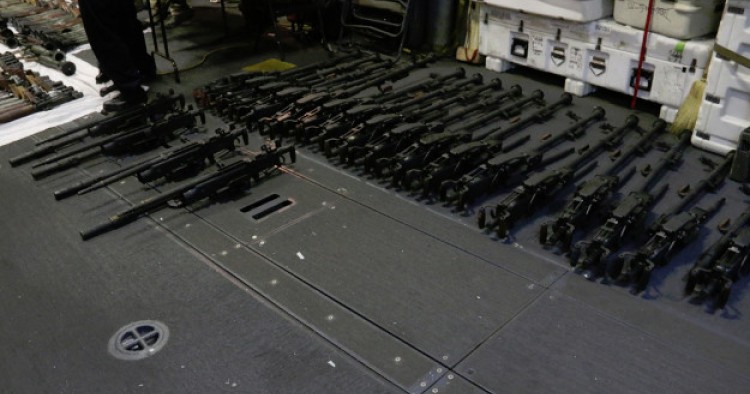 A senior Iranian cleric, who reportedly advises Supreme Leader Ali Khamenei, has in a rare video admitted that Iran provides weapons to the Houthi rebels in Yemen. “Iran’s catering of missiles to the Houthis was carried out in stages by the Revolutionary Guards and the support and assistance of the Iranian navy,” Mehdi Tayeb, head of the Ammar Strategic Base – an organization that is said to be tasked with fighting soft wars against Iran – was quoted as saying. The cleric also criticized President Hassan Rouhani for stopping the Islamic Revolution Guards Corps (I.R.G.C.) from sending weapons to the Houthis two years ago in order not to scuttle nuclear negotiations with Washington. He also claimed that “the nuclear negotiations between Tehran and the six major countries have come in the way of preventing three times the provision of Iranian surface-to-surface missiles to the Houthis.” He continued: “Khamenei was the one who ordered Iranian naval to be stationed at Bab al-Mandeb to facilitate weapons supplies without anyone knowing.”

Comment: The remarks by the Iranian cleric discredit the Iranian government’s claim that it does not interfere in Yemeni civil war. Last year, Iran’s former ambassador to Iraq, Hassan Kazemi-Qomi admitted that Tehran “assisted the region’s oppressed people, including in Yemen against the Saudi invaders.” In an interview with a conservative Iranian newspaper, he warned that Iran’s national security would be compromised if Riyadh succeeded in Yemen.

The official position of the Iranian government is that it does not provide weapons or financial support to the Houthis. But U.S. military and its allies have confiscated several Iranian arms shipments destined for Yemen. In late March, a report by Conflict Armament Research (CAR), a U.K.-based organization that tracks and analyzes weapons shipments around the world, claimed Iran had transferred aerial drone technology to Houthis, who use the explosive-laden drones to disable Saudi-led coalition’s missile defenses. By disrupting the coalition's radar system with the drones, it added the rebels are able to fire a barrage of missiles at coalition targets, it added. "These findings strengthen a body of evidence compiled by CAR, which links weapons captured from Houthi and Saleh-aligned forces to transfers from Iranian national stockpiles," the authors of the report explained. In January, the Australian government released photographs that showed light anti-armor weapons seized near the Yemeni coast were manufactured in Iran.

A report by Reuters last month quoted several regional and Western sources as saying that “in recent months Iran has taken a greater role in the two-year-old conflict by stepping up arms supplies and other support.” The report also quoted an unnamed Iranian official as revealing that Major General Qassem Soleimani, the commander of the Islamic Revolution Guards Corps’s elite Qods Force, met top I.R.G.C. officials in Tehran last month to explore ways of empowering the Houthis.

Moreover, a Saudi coalition aircraft recently killed a senior I.R.G.C. officer who reportedly supervised the design and implementation of ballistic missile systems for Houthi missile brigades in Yemen. And earlier this month, Yousef al-Otaiba, the United Arab Emirates’ ambassador to the United States, said Iran was prolonging the Yemeni conflict by sending weapons to Houthi rebels.

During his trip to Riyadh this week, U.S. Defense Secretary Jim Mattis blasted the Iranian meddling in Yemen and said Washington was considering increasing its support for the Saudi-led coalition in Yemen – which prompted an angry reaction from Tehran.