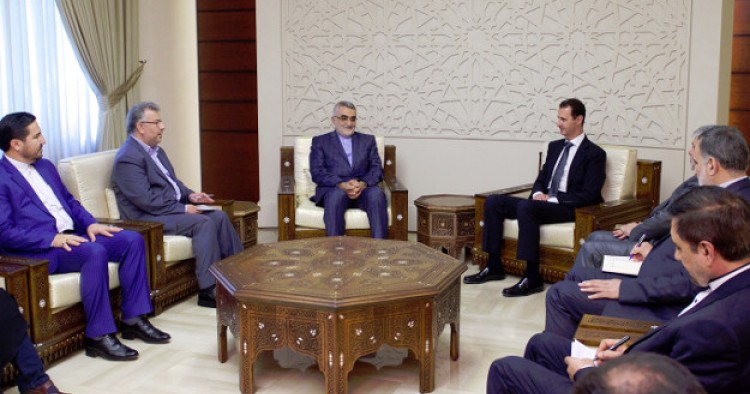 A senior Iranian parliamentary delegation visited Damascus and held talks with Syrian President Bashar al-Assad earlier today, the Iranian media reported. Alaeddin Boroujerdi, the chairman of the parliament’s national security and foreign policy committee, described Syria as a key pillar of the so-called “resistance front” against the United States and congratulated the Syrian president for the latest territorial gains by the Syrian Army and its foreign allies. “Syria is a symbol of resistance against the enemies in the region. The significance of the latest developments in Syria will certainly be realized in the future. This is because the government and people of Syria acted decisively and firmly to defeat plans by the axis of America, the Zionist regime and their regional allies,” he said. Boroujerdi further emphasized that the Islamic Republic is ready to play an active role in Syria’s rebuilding process.

Assad reportedly thanked the Iranian delegation for Tehran’s “sacrifices and support during difficult times.” He continued: “The blood of Iranian martyrs spilled in Syria will serve as a great investment for cooperation and friendly and brotherly relations between the two countries in the future.” The Syrian president also claimed that the latest military gains by Syria and its allies have strengthened the “resistance front” in the region.

Comment: With the Assad regime in control of most major population centers in Syria and the Syrian opposition in disarray, Tehran and its allies have declared victory. The term “resistance front” is used by Iranian leaders for Tehran’s regional allies and proxies that further the Islamic Republic’s policies in the region and “resist” the Unite States, Israel and other regional rivals. Iran considers Syria and Iraq as significant pillars of the so-called “resistant front” along with the Lebanese Hezbollah. Even before the Syrian civil broke out, Tehran was using Syria as a conduit to arm Hezbollah and Palestinian militant groups. For Iranian leaders, the fall of the Assad regime would have not only denied Tehran an important regional ally but would have also jeopardized its regional influence. It was against this backdrop that Iran directly and forcefully intervened in Syria to rescue the embattled regime in Damascus.

The Syrian war is far from over, but as Boroujerdi’s remarks indicate, Tehran is already seeking financial rewards for its military support to the Assad regime in the past six years. Since the seizure of the northern Syrian city of Aleppo in December, the Syrian government has granted companies affiliated with Iran’s Islamic Revolution Guards Corps lucrative contracts on a no-bidding basis. As in Lebanon, the I.R.G.C. is complementing its hard power mission with economic projects and other soft power strategies to consolidate its long-term presence and influence in Syria.