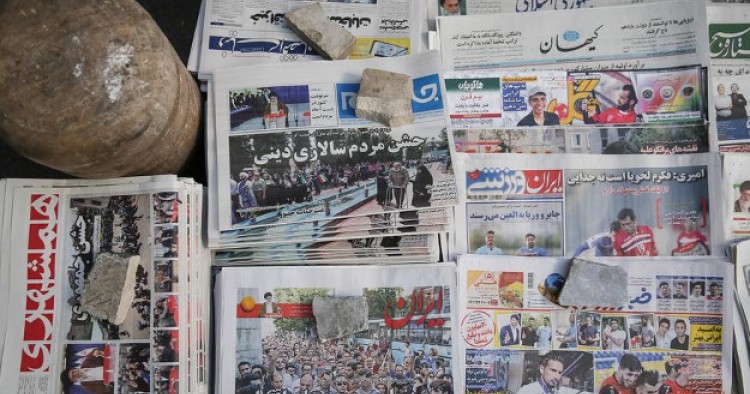 An article in reformist Shargh daily has urged the Rouhani government to abstain from impulsive measures to retaliate against the Trump administration latest anti-Iran sanctions and statements. The piece entitled “Neutralizing Trump’s Bombs” argues that the best course of action for Tehran would be to focus on consolidating its latest gains in Syria and Iraq and facilitating foreign investment in the country even by American companies.

Another analysis piece in Iran daily stresses that Tehran should work closely with European powers to keep the nuclear deal and ensure more foreign investment in the country. According to the author, an economist, the nuclear accord has bolstered the Iranian economy, mainly by increasing Iran’s oil revenues and access to foreign assets. “Trump is seeking new tools for sanctions, which he at present does not have. Therefore, the only thing America can do is to threaten financial institutions not to cooperate with Iranian banks. Because of America’s spoiling acts, our banking transactions with the world faced many challenges in the past as well. Now, too, in the worst-case scenario, America will reduce or cut major banks’ relations [with Iran]. But because they have little cooperation with Iran, this pressure tool is not very important.”

In contrast, hardline outlets criticized the Rouhani government for having trusted and engaged the United States. They also argue that the nuclear deal has not served Iran’s national interests.

An article in hardline Kayhan, whose editor is directly appointed by Supreme Leader Ali Khamenei, accused pro-government outlets of spreading lies about the benefits of the nuclear deal. It claims that in the past two years, the nuclear deal has had “zero achievement” for Iran’s economy. “On the one hand, the problem of attracting investment to the country remained unresolved; and on the other, major international banks continued to have no relations with Iran as in the past,” it added. Kayhan also opines that now that Washington is imposing more sanctions on Iran, the preliminary agreements signed with European companies such as Total and Renault are in doubt.

Comment: President Donald Trump’s hardline speech on Iran had brought about a rare moment of unity between the country’s pragmatists and hardliners. President Hassan Rouhani defended the Islamic Revolution Guards Corps (I.R.G.C.) despite its acts of oppression at home and military adventurism abroad. Foreign Minister Javad Zarif tweeted that all Iranians are now I.R.G.C. Likewise, the hardliners thanked Rouhani for defending the I.R.G.C. and Iran’s revolutionary ideals and lashed out at the U.S. But that moment proved to be not just rare but also transient. On Monday, pro-Rouhani and hardline outlets were at each other’s throats once again.

While Rouhani defends his government’s nuclear diplomacy despite Washington’s threat to abandon it, hardliners feel vindicated as they opposed negotiating with the U.S. at the first place. They also point out that while nuclear-related sanctions on Iran were lifted in January 2016, existing U.S. sanctions have stymied economic growth and foreign investment in the country.