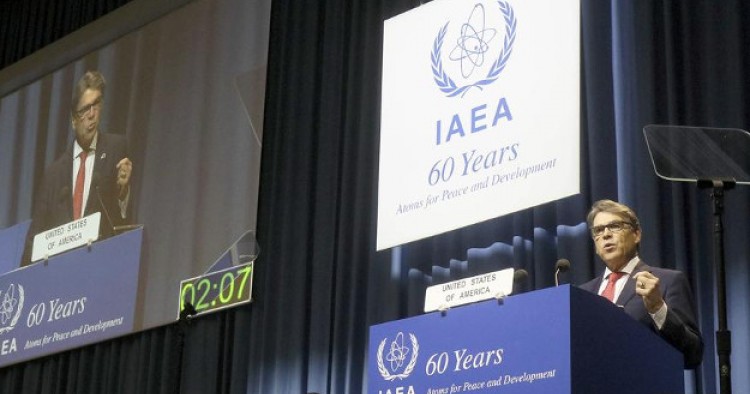 At the 61st General Conference of the International Atomic Energy Agency (I.A.E.A.) in Vienna earlier today, the top Iranian nuclear official warned that U.S. “hostile” actions are undermining the nuclear agreement Tehran signed with world powers two years ago. “Any action or design aimed at weakening or scraping the terms of the nuclear deal, under any political pretext or motive, will undermine and jeopardize this historic achievement – which will have negative consequences not just for signatories of this deal but also for the entire world community,” said Ali Akbar Salehi, who heads the Atomic Energy Organization of Iran (A.E.O.I.).

He claimed that the Islamic Republic carries out its nuclear program “under maximum transparency” and has given the I.A.E.A. complete access to its nuclear sites – rejecting U.S. demands for the inspection of military sites. He further cautioned that the nuclear accord cannot be successfully implemented unless all parties to the deal adhere to it. “The American government’s hostile attitude and this country’s measures to undermine the nuclear accord and prevent Iran from benefiting from it are inconsistent with the spirit and letter of the J.C.P.O.A.,” he added, referring to the Joint Comprehensive Plan of Action. “We are confident that the I.A.E.A. and its director-general will resist such unacceptable demands and will continue its technical monitoring role in an impartial manner.”

Comment: Inspection of Iran’s military sites has recently become a growing point of contention between Washington and Tehran. U.S. Ambassador to U.N. Nikki Haley traveled to I.A.E.A. headquarters in Vienna last month to push the international watchdog to visit Iran’s military sites to ensure Tehran did not have a covert nuclear program. Iranian leaders have ruled out the U.S. demand. On Monday, U.S. Energy Secretary Rick Perry renewed the call at the I.A.E.A meeting. “We will not accept a weakly enforced or inadequately monitored deal,” he told the conference. “The United States ... strongly encourages the IAEA to exercise its full authorities to verify Iran’s adherence to each and every nuclear-related commitment under the JCPOA,” he added.

I.A.E.A. officials say the agency can request access to Iranian military sites if it has credible information about any covert nuclear activities. But Tehran says visiting its nuclear sites is a “red line” although it did allow I.A.E.A. inspectors to visit Parchin military base right after the nuclear deal was signed.

Earlier this month, I.A.E.A. Chief Yukiya Amano told the Agency’s Board of Governors that his inspectors do not distinguish between military and civilian sites and may seek access to Iran’s military sites if needed. His remarks drew strong reactions from Tehran. “Visiting Iran’s military centers is forbidden to all foreigners,” said Ali Akbar Velayati, top advisor to Supreme Leader Ali Khamenei. “If he was independent and able to take decisions independently, he should have emphasized on visiting nuclear sites of the Zionist regime because the existence of nuclear weapons in the occupied territories is the biggest threat to the Middle Eastern region. Amano is ignoring this issue and has no response,” he added.