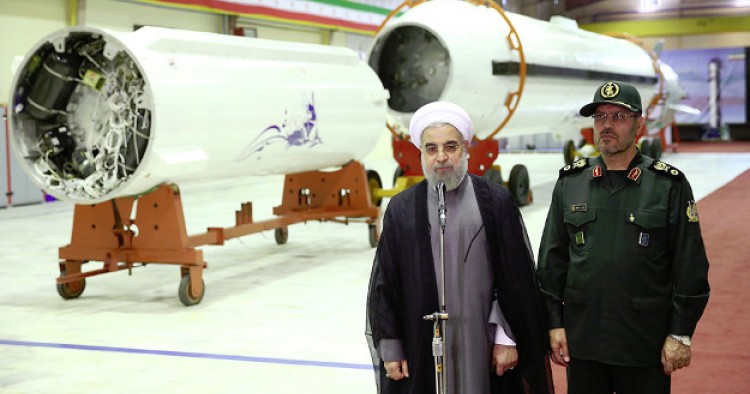 The Iranian defense minister has announced that the country’s arms production capacity has seen a staggering 100-fold increase under the Rouhani administration, Sepah News, an outlet affiliated with the Islamic Revolution Guards Corps (I.R.G.C.) reports. “Regarding our missile capacity compared to the beginning period of the 11th administration, we’re now not only meeting our domestic needs but also can create opportunities for us international markets to export military products to other countries,” Brigadier General Hossein Dehghan said. “The cost and quality of Iran’s military products are such that despite unfair sanctions against the Iranian nation, we export our defense products to major countries around the world,” he claimed.

In addition, the defense minister highlighted Iran’s other latest achievements in the field of defense power, particularly the production of advanced ballistic and cruise missiles as well as missile defense systems. He also claimed Iran's armed forces have made major strides in the fields of electronic warfare, telecommunications and naval capabilities.

Dehghan further revealed that the budget to upgrade the country’s defense capabilities has also increased 2.5 percent compared to the previous administration.

Comment: While the 2015 nuclear deal rolled back Iran’s nuclear program, the Islamic Republic has accelerated its efforts to modernize its military and enhance domestic production of military equipment. At present, the Iranian military is still dependent on Russia, China, North Korea and other foreign suppliers to procure much of its requirement for military equipment. Based on Supreme Leader Ali Khamenei’s guidelines, the Iranian military has recently put particular focus on producing military weapons and other equipment at home and reduce the country's dependence on foreign suppliers to a minimum. Last year, Khamenei had stressed that “Iran's defensive capability and power must be increased so that the bullying powers would feel threatened.”

Tehran has apparently used some of the sanctions relief to invest in its defense power. Last month, Iranian President Hassan Rouhani, who is seeking a second term in May 19 presidential elections, said the country’s military budget had seen a 145 percent increase during his four years in office. And in January, Iranian lawmakers approved a plan to expand military spending to five percent of the overall budget. The plan includes developing Iran’s long-range missile program, the main source of tension lately between Tehran and Washington. According to the Iranian media, the plan "requires government to increase Iran's defense capabilities as a regional power and preserve the country's national security and interests by allocating at least five percent of annual budget" to military programs.

In addition to meeting military needs domestically, the Iranian military, as Dehghan suggested, also seeks to become a major arms supplier to foreign countries in the future. In January, Dehghan had announced that the Islamic Republic was ready to export small-caliber ammunition to foreign countries. “By inaugurating and launching this production line, in addition to meeting all needs of the armed forces to small-caliber ammunition, the production capacity for such ammunition has doubled and the ground is paved to export it as well.”